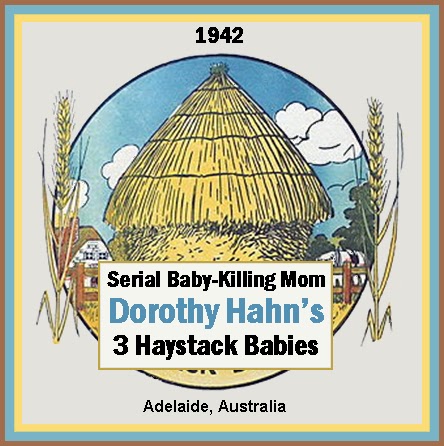 FULL TEXT: Adelaide, Today: A young woman has allegedly confessed to burying three new-born babies beside a haystack in the backyard of her parents’ home.

Subsequently 26-year-old Dorothy Hahn was charged with having, between 1935 and 1938, endeavored to conceal the birth of her three babies.

But for the wagging tongues of neighbors, police would never have investigated. Neighbors reported that on three different occasions they bad noticed Dorothy Hahn was in a certain condition.

But, just as they expected to see her with a baby, she appeared fit and well and back on her job.

“She admits she was in delicate health again at the time of her arrest, the Crown Prosecutor told the jury. 'It is believed that, had not the police intervened. Miss Hahn, who was to become a mother again, might have concealed yet another child.”

However, the proceedings, against the young woman collapsed when Mr. Justice Cleland ruled that certain evidence was inadmissable.

Dorothy Hahn allegedly made admissions that, although she lived at home, not even her mother noticed her condition. Nor did she tell her parents what had happened.

“Police did not dig for the bodies,” said the Crown Prosecutor, as it is three years since they were buried and the haystack had been removed.

“Miss Hahn said she didn't bury them too deeply; just covered them with straw.”

A nolle prosequi was entered by the Crown.