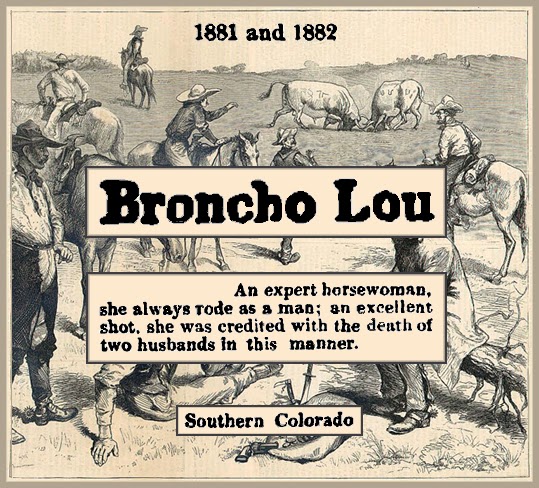 FULL TEXT: Broncho Lou [once known as “Mrs. Yankers”] was a well-known frontier character in the recent history of Colorado. A woman of perhaps twenty-five, with considerable pretense to beauty, she could yet be fierce as a fiend in her ferocity, or as a gentle as a lamb, or as soft as an angel in her devotion to those she liked. With her is somehow linked the history of many of the desperadoes of Southern Colorado.

In the years 1881 and 1882 cattle and stock stealing was carried on to a large extent, besides numerous highway robberies, which did not stop at murder, were of almost daily occurrence. At last one of the communities most cursed by those outlaws determined upon an organized effort to “wipe them out.” A posse of citizens was raised, who, armed to the teeth, started out in quest of the desperados. After proceeding about six miles from town they were found encamped, to the number of six, as hard-looking ruffians as could be found anywhere. No attempt at hiding had been made, and the citizens rode in the center of the camp with pistols drawn, and demanded the surrender of the outlaws. This request was answered by a volley, in which one of the leaders of the citizens fell mortally wounded. Then followed a short but decisive battle, which resulted in the death of two of the offenders, and the capture, although badly wounded, of three others, the sixth man somehow having made his escape. The fight occurred on the sight of an abandoned railroad camp, and was known as the battle of the grade. The three wounded prisoners were taken to town and put under a heavy guard, as threats of lynching were freely made. So indignant were the people, however, that the wounded men would have died for want of attention had it not been for Broncho Lou. Without her three men would have been left to a well-deserved but somewhat inhuman fate. She, however, assumed their whole care, and, devoting herself to them with a humanity and tenderness worthy of better objects, they all recovered, and were and placed in what was supposed to be secure quarters to await their trial. One morning their jail door was found open and the birds flown, with the aid, as was afterward ascertained, of Broncho Lou, who had furnished them with tools to escape and also horses, which she obtained from some of their friends. Simultaneously with their escape Lou disappeared, and it was rightly supposed that she had fled with them.

A hue and cry was again raised, stimulated by the offer of heavy rewards by the town authorities, and it was not long before the trial of the fugitives was discovered, marked as it was by a number of fresh outages. Not a ranch or small settlement near which they had passed but had suffered at their hands, and the pursuing party constantly received large sessions until it formed quite a respectable company. Riding night and day for several days they finally came upon fresh tracks made by their game. Profiting, however, by past experience, the approach was made cautiously, and soon the scouts reported the objects of their search were in a deserted cabin standing in a dense grove of aspen trees. Cautiously surrounding the cabin and covering every point with their revolvers and Winchesters, the inmates were ordered to come out and throw up their hands, which they quickly did, and were soon mounted on extra horses and securely bound, with the exception of Lou, who was allowed the freedom of her hands and feet. After a short consultation it was decided to settle the desperadoes’ fate then and there. An open space was sought and preparations made for lynching them. Just as the ropes were being adjusted around their necks Lou, with a sudden move, took from a place of concealment in her dress a keen knife, and before the astonished gathering could recover from their surprise the three men and woman were galloping off into the timber at a rapid rate. They were never caught, so far as known, although, their course being south, there is no doubt but that they formed a considerable accession to the already criminal population of New Mexico. Broncho Lou was never after heard from. Certainly she was one of the queerest specimens of womankind that ever graced or disgraced a community. As expert horsewoman, she always rode as a man; an excel at shot, she was credited with the death of two husbands in this manner [in Colorado]; an experienced gambler, she was well known as a dealer in stud poker who always drew largely and made big winnings for her employer. With her [illeg.] and employments, there can be no doubt but that her end will be a violent one.

***
Another, long, and later, article, which gives the name “Mrs. Yankers,” and identifies Colorado as the place she shot two of her husbands: