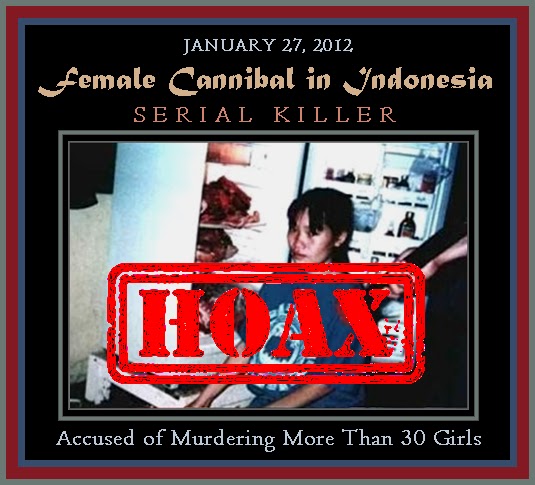 NOTE: This case, long suspected of being a hoax story due to the fact that there has only being one news report, without follow-up is now marked as "discredited."

FULL TEXT (with typos corrected): I’m a reporter here in Jakarta, Indonesia, along my career since 2006 in Indonesian journalism, I’ve NEVER encountered this case. If it did happen, it will surely pass on to my table, because news crime is one of my division. [Comment on UHoM, Gerry, March 19, 2014 at 1:49 PM]

FULL TEXT: Indonesia’s police have arrested a 29-year-old Philippine woman for killing and eating humans. This woman has killed and eaten more than 30 girls and many other humans including her husband and had kept their meat in refrigerator. She had been enjoying eating human meat for a long time.

This cannibal female had said, that she arranged many parties for her friends and relatives, to whom she had cooked and served human meat, without their knowledge. Her guests had said that her food had tasted very delicious.

This woman said that she had eaten the victims due to her inner desires and if she is given another chance, she would repeat this action again without any interruptions.

Even in prison, she had attacked a female guard, bitten her right hand and swallowed one of her fingers.