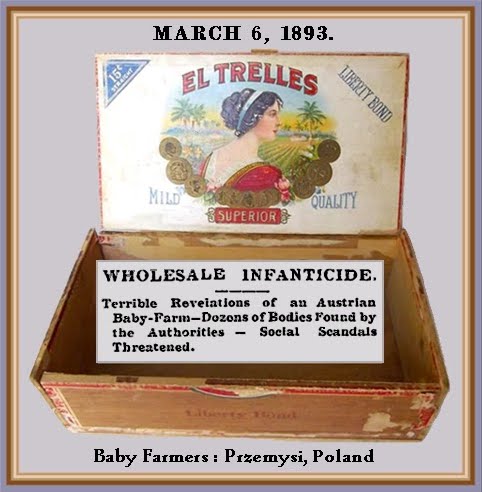 FULL TEXT: Vienna, March 5. – Three baby farmers were arrested as Przemysi [Poland] yesterday through the suspicious death of the daughter of a Government official who had been kept secluded for several days at the houses of one of the midwives. On Friday the woman was placed under surveillance and the back yard of her house was dug over. The bodies of twenty-seven very young infants were found in cigar boxes a few inches beneath the surfaces. A similar investigation of the premises of these two resulted in the discovery of the skeletons of 19 infants. The women confessed, but said that if arraigned they would shake the city with their revelations.

NOTE: One of the reasons so many baby farmers who committed serial murder, from all parts of the world, managed after their arrest to avoid harsh penalties, is that their clients or parties in between them and the babies’ parents (namely prostitutes, procurers, abortionists) serviced wealthy and powerful members of the community. It is frequently argued that baby farm infanticides are motivated by fear that the parents could not afford to raise the child. Yet it was quite common to see such cases as this where it appears that the children were murdered with the parents’ permission because the wealthy parent(s) were not able to spend money or risk social standing to save the life of an innocent baby.

Reports of a German case from 1892, Frau Myer, stated that “it is reputed that several wealthy ladies of Frankfort are to be accused of complicity in the baby farmer’s criminal operations.”