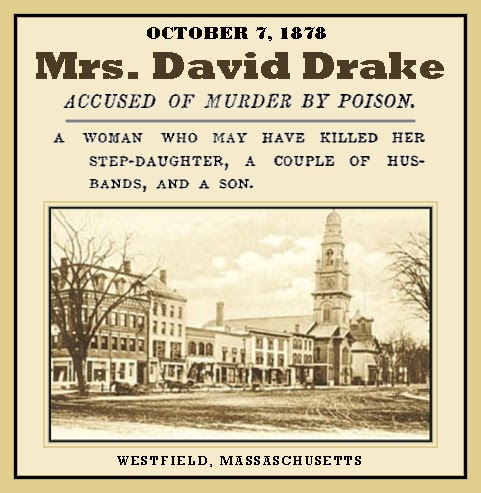 FULL TEXT (Article 1 of 2): Westfield, Mass., Oct. 6. – This place is considerably excited over an alleged case of poisoning, Mrs. David Drake being suspected of murdering her step-daughter Etta, a young woman of 17 years. The latter died on Friday, at her brother’s residence in Pochassie-street, where she had been living for about four weeks, after leaving home, it is said, because she feared for her life, her mother’s actions being strange and unaccountable. Once the girl awoke in her sleep and found Mrs. Drake bending over her, while the air was filled with a suspicious odor of ether. At another time, when she heard her mother coming in the night, she jumped out of a window without awaiting further developments, and fled to her brother’s house. Miss Etta evidently had not any poisons given to her for four weeks, but some of her friends think death resulted from slow poison administered before she left home. Her body was examined to-day by Medical Examiner Waterman and several other physicians, who found no cause for natural death, and the stomach and other portions were removed for analysis.

Miss Drake, the suspected murderess, is a strange person, accused of opium eating and fits of insanity. Her first and second husbands are said to have died mysteriously, and a son by her first husband is reported to have been found dead in bed, after retiring in apparent health, the woman having learned that his presence would be an obstacle to her second marriage. When David Drake married her, several years ago, it was with the violent opposition of his son and daughter, and after the wedding a bitter hatred sprung up between the children and their mother, no love lost on either side. It would not be strange, therefore, if in her unbalanced state of mind Mrs. Drake had taken the means to get rid of one she considered an enemy.

FULL TEXT (Article 2 of 2): A divorce case of considerable local interest was tried in Westfield. Saturday, in which the wire of David Drake, an old West Parish farmer, asks that their marriage be annulled and that she be given $5000 alimony on the ground of cruelty. The husband offers $1000 alimony and no contest, as he says he is willing to give that amount to be rid of her, but will fight the $5000 Mr Drake is the father of Etta Drake, who died rather mysteriously last Fall, and some parties openly charged her stepmother with poisoning her with Paris green. Medical Examiner Waterman sent the stomach to an expert for analysis, which resulted in finding no trace of arsenical poison.