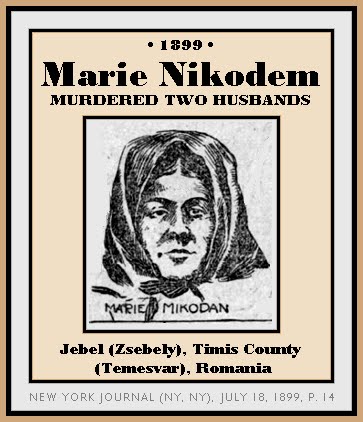 ***
Nikodem – FULL TEXT: Vienna, July 18. – The most sensational murder trial that has occurred in Hungary during this century ended in the District Criminal Court of Temesvar.

Nine women and three men, all residents of the little town of Szebely in southern Hungary, were charged with having murdered their respective husbands, wives and sweethearts with arsenic. The main instigator of all the crime is supposed to be George Korin, the village druggist.

Marie Nikodem, the widow who was convicted of having murdered two husbands, was sentenced to imprisonment for life at hard labor, while the others were let off with sentences ranging from fifteen to ten years.

The light sentence, only fifteen years, received by the druggist, is most astounding of all. It was proved in the  course of the trial that he supplied all the women poisoners with arsenic, knowing what use it was to be put.

FULL TEXT (translated from German): Temesvar, 2 July. In the process of Zuebely poisoners and spouses, on Saturday, Marie Nikodem was sentenced to life imprisonment by two murders; Katharina Urszika, Zimcsa Trifuni and Marie Nikodem, for committing  two murders sentenced to life; Katharina Urszika, Zimcsa Trifuni and Marie Csoran sentenced to 15 years in prison for murder. Georg Korin, who sold the poison to the murderesses, for complicity in 5 murders was sentenced to 15 years in prison. The other 9 defendants were acquitted. The prosecutor and the condemned confirmed the judgement..

***
Triku – FULL TEXT: Vienna, July 3. What is regarded as the most remarkable case in criminal history has occurred in Zesbeley, In Southern Hungary.

Twelve women and two men are on trial before the district colonial court of Temesvar, all charged with having murdered their respective husbands, wives and sweethearts with arsenic, the main instigator of all the crimes being George Korin, a Zesbely druggist.

The most sensational feature of this wholesale murder trial is the attempt of the prosecution to convict Dr. Johann Mayer, the village physician, of being the principal accomplice of the druggist. The evidence has already shown that Dr. Mayer issued in a number of cases certificates of “death by natural causes,” while he knew that the deceased persons had died of poisoning.

It is believed here that despite the fact that 120 witnesses have been summoned, the trial will be ended in a day or two, and that, with the customary swiftness of justice in that part of Hungary, all the accused persons will be put to death before the end of the week.

George Korin, the alleged inciter of all these crimes, is a unique character. His village apothecary shop was the meeting place of all the social gossipers of the district. Korin knew the family secrets of all, and peasant women principally were his dupes. He understood how to tempt the young peasant wife, who cared little for and always quarreled with her penurious husband, to see that he had his life heavily insured and to get rid of him in the most summary and unsuspecting manner.

Where Korin knew that a peasant woman was sustaining clandestine relations with a lover he gradually obtained her confidence, and for a consideration taught her how to use arsenic with which to destroy her husband.

The village cemetery of Zesbeley would have become more densely populated were it not for anonymous communications sent from time to time during the past year to the authorities at Teraesyar by some one who evidently had a grudge against Korin, the druggist. At first no heed was paid to the information, but when some months ago it was learned that Frau Lisa Triku, a veritable female Bluebeard, had buried her fourth husband, whom she had married but a short time ago, an investigation was made with the result that sixteen bodies were exhumed and sent to the office of the State chemist at Budapest.

The bodies were indicated in one of the anonymous letters. All were found to contain arsenic of sufficient quantity to kill two men.

Two of the murderesses have committed suicide in prison. They are Jeanette Gaga, aged twenty, and Icenia Diminetzku, a beautiful young woman. Each left a full confession, implicating George Korin.

Jebel is a commune in Timiş County, Romania. It is composed of a single village, Jebel, and also included Pădureni village until 2004, when it was split off to form a separate commune. [Wikipedia]. 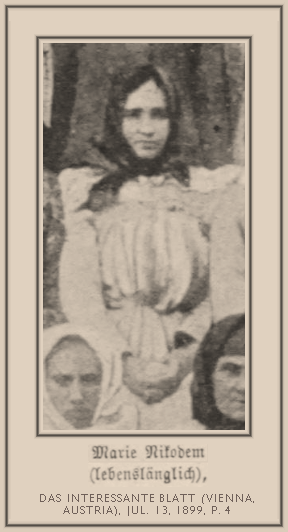 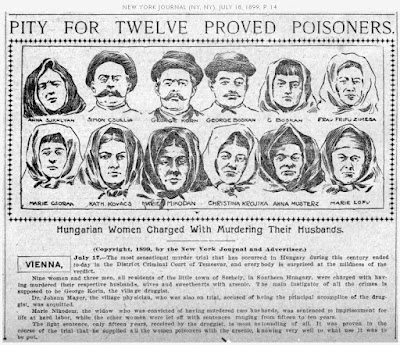 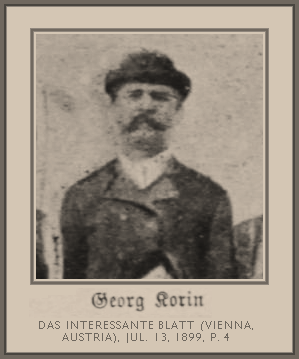 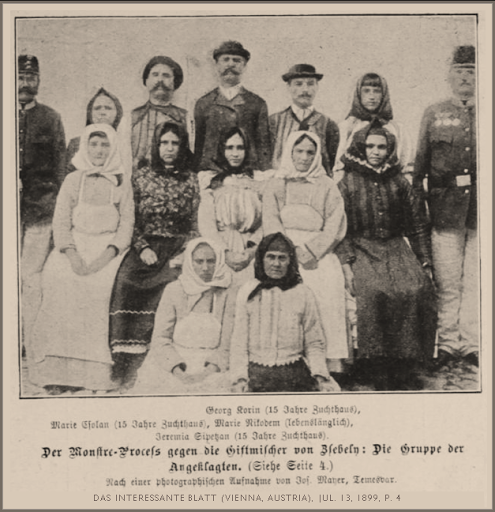 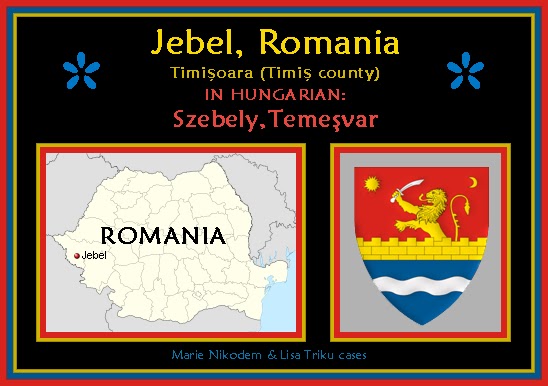 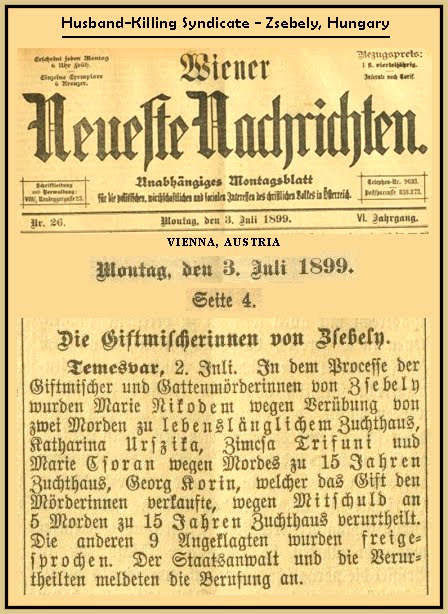 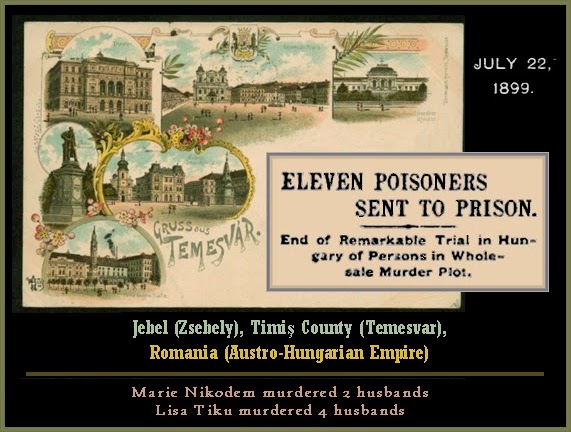