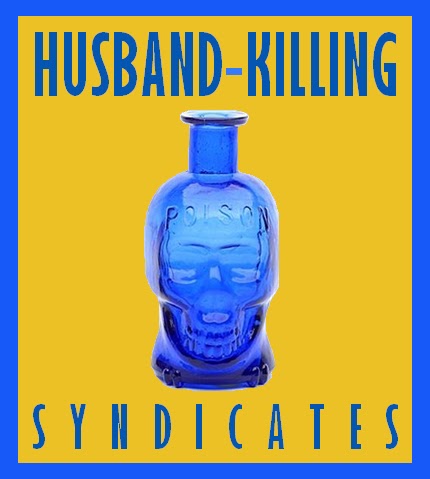 HUSBAND-KILLING SYNDICATES: The vast majority of victims of these conspiracies were husbands, yet some were wives or other family members, including children.


1880: HUNGARY - Szerdahely
Leader: Anna Nagy, AKA Kathi Lyukas (or "Kate Nagy"), murder two of her own husbands; Lyukas confessed to 6 other murders (20 other deaths suspected to be caused by her); Lyukas was hanged Nov. 30, 1882.
Method: arsenic baked into little cakes.
Victims: convicted of 26 murders.


1887: CROATIA – Aingula, Syrmia district of Croatia
Leader: An “old woman” poison-seller & racketeer.
Method: poison (unidentified as of yet).
Victims: 7 men lured into marriage to be murdered for their assets.

Leader: Mari Azalai Jager.
Accomplices: "a band of poisoners" 3 men & 2 women (including Gulyas Kis-Samuel, male).
Method: Three poisons, belladonna, arsenic and chloride of mercury.
Jul. 24, 1897, Budapest: Trial of 12 women & 2 men; 4 sentenced to death; 1 to life in prison (man who killed his mother); 1 to 6 years in prison
Victims: estimated at over 100.


1905: HUNGARY – Bacs-Bodroger Comitats, Szeged, Csongrád
Leader: Widow Mirieki (Miriczky).
Method: arsenic.
Victims: husbands and wives, including a couple who each bought poison to murder one another.

Method: poison in food or drink placed there directly by Madame Popova.
Victims: 50 ("300" in some sources), all husbands.

1931: USA – Detroit, Michigan
Murderers: Rose Veres (from Sarud, Hungary), "THe Witch of Medina Street," and son, William.
Related case: In Detroit Michigan in a neighborhood populated by immigrants from Sarud, Hungary, a woman conducted, along with her son, an insurance murder racket with boarders as her victims. Though she was later released from prison on appeal, there is little doubt she was guilty of the crimes she was originally convicted of. 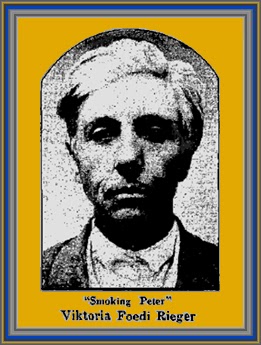 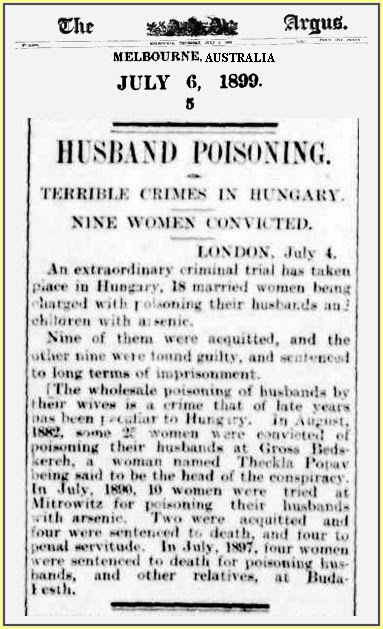 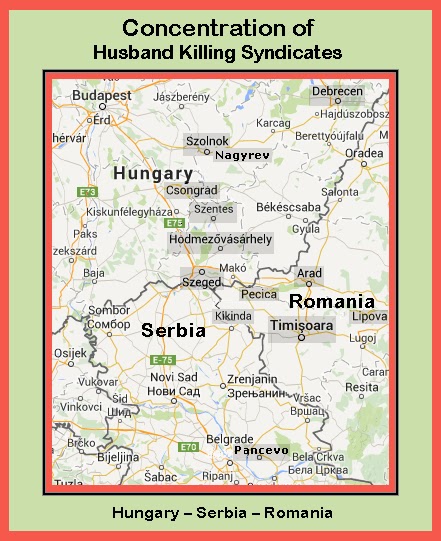 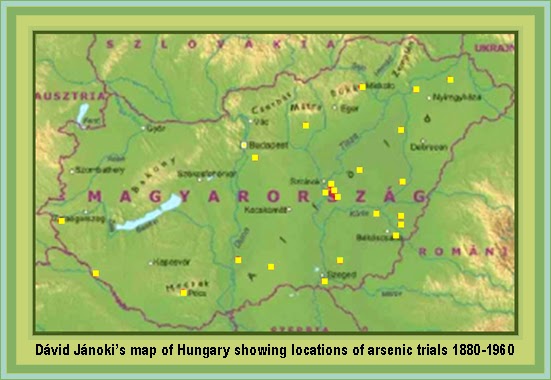 Explanations for the Hungarian murder syndicates that are commonly found are based on theories that are now being demonstrated to be faulty. Thus we must resist interpreting the phenomenon of the various Eastern European murder syndicates – with all their individual differences and complexities – through the simpleminded theories and claims that have been put forth in the standard literature thus far.

Some motives for murder among the Eastern European murder syndicates::

1886 – Persa Czirin (professional poisoner) – [A] wholesale epidemic of poisoning had broken out among the women of the place who administered arsenic to their husbands whenever they wanted to marry somebody else. The first of the trials came on at Panosova recently, and ended with the conviction of a young pleasant woman, Draga Radovancey, who was sentenced to be hanged. An old peasant woman, Persa Czirin, who supplied the poison, was released for want of sufficient evidence. [“Wholesale Poisoning of Husbands.” The Southland Times (Invercarghill, Southland, N. Z.), Jun. 14, 1886, p. 4]

1889 – Thekla Popov (professional poisoner) – [Serial poisoner] Thekla Popov’s clients were, however, not always married women. Sometimes she had dealing with young girls who quarrelled with their sweethearts, and who, from jealousy or rage, had determined to kill them. [“Secret Poisoning. - Awful Crimes Of Borgias Recalled By Hungary’s Horror.  Murderous Nostrums Of Old. - Terrible Women Who Divorced Themselves By Deadly Potions. - The Evil Worked By Fortune Tellers.” Pittsburgh Post (Pa.), Dec. 14, 1889. p. 12]

1889 – Draga Kukin – Amongst other things he overheard was Kukin’s widow [Draga Kukin] saying to her accomplice, “Well, I am young and pretty. He was old and ugly. Why should he not die?” [“Secret Poisoning. - Awful Crimes Of Borgias Recalled By Hungary’s Horror.  Murderous Nostrums Of Old. - Terrible Women Who Divorced Themselves By Deadly Potions. - The Evil Worked By Fortune Tellers.” Pittsburgh Post (Pa.), Dec. 14, 1889. p. 12]

1897 –  Marie Jager (Azalai Jager Mari) (professional poisoner)  – It has transpired that the woman was much sought after, because when children were unwelcome they lived but a little while when Azalai Jager Mari was called in attendance. How many infants she destroyed it is impossible to guess. [“A Woman Who Has Poisoned More Than 100 People,” The World (New York, N.Y.), Jul. 11, 1897, p. 29]

1900 – Nikola Bettuz (professional poisoner)  – In some instances it was found that the object of the women was to obtain the insurance on the lives of their husbands. [“Slay Their Husbands - In Hungary Wives Tired of  Their Spouses Kill Them by Using a Mysterious Poison.” (Buda-Pesth Cor. Chicago Chronicle.) Fort Wayne Sentinel (In.), Oct. 20, 1900, p. 1]

1901 – Kissoda, Romania – [Note: not just husbands, but “lovers” as well] Instances in which wives rid themselves of inconvenient husbands and girls did away with lovers whom they no longer wanted increased there appallingly.  [“Epidemic Of Poisoning In Hungary. - Eighteen Men Killed.” The Capricornian (Rockhampton, Queensland, Australia), Jan. 12, 1901, p. 38]

1907 – Julia Wunicsitch – Julia Wuicsitch poisoned her husband because he could not buy her a new dress. [“Town Poisoned - And Wiped Out of Existence by Modern Lucretia Borgia. - Fair Young Fiend - Poisoned Her Rich Old Husband So She Could Marry a Young Lawyer, Whom She Also Poisoned. - Then With Another Woman She Went Into the Wholesale Poisoning Business.” The Manning Times (S. C.), Mar. 20, 1907, p. 6]

1907 – Marthas Petromany (professional poisoner)  – She married a wealthy farmer some five years ago solely on account of his possessions. A young man of talents and good prospects who was the leading local lawyer became her ardent admirer. Mme. Petrubany’s highest desire was to see her old husband out of the way to marry the lawyer and combine his superior social station and the old man’s property. [“Town Poisoned - And Wiped Out of Existence by Modern Lucretia Borgia. - Fair Young Fiend - Poisoned Her Rich Old Husband So She Could Marry a Young Lawyer, Whom She Also Poisoned. Then With Another Woman She Went Into the Wholesale Poisoning Business.” The Manning Times (S. C.), Mar. 20, 1907, p. 6]

1929 – Anyuka, Dee (AKA Anna Pistova, etc.) – A murder trial has begun at Panchova, Jugo-Slavia, where 93-year-old Anyuka, Dee is charged with having murdered more than fifty men. She is known throughout the district as the “Banat Witch.” Legends throw a veil of mystery around her lonely life, and as the wives of wealthy farmers liked to go to her for help in cases of illness and also to consult her on other difficulties, she drew a large income, which enabled her to lead a life of comfort. Recently it was said that Anyuka Dee, in addition to saving lives with herbs, also destroyed them with arsenic if she were paid to do so. [“A Jugo-Slavian ‘Witch’ - Faces Murder Trial,” The Advertiser (Adelaide, Australia), Aug. 12, 1929, p. 17]

1929 – Suzie Olah (professional poisoner)  – Not wishing to risk another trial [for performing abortions], Aunt Suzie apparently decided to supplement her earnings in a new fashion. She began a series of child poisonings. There would be a discreet dosing, a little funeral, a tiny grave – and a mouth less to feed. Aunt Suzie worked exclusively with arsenic extracted from flypaper. It seemed effective. She decided to enlarge her sphere. She found wives who had grown tired of their husbands, children who coveted the property of their elders, mothers with ailing sons. Aunt Suzie would whisper that she knew a way. [John MacCormac, “Murder By Wholesale: A Tale From Hungary,” New York Times (N.Y.), Mar 16, 1930, p. XX3]

1929 – Maria Kardos – After marrying and divorcing two husbands she found herself at the age of forty with a 23-year-old son, whose health had made him a burden. Moreover, she had fast taken a young lover and did not wish to have this constant reminder of her own age. She consulted Aunt Suzie. The first dose of arsenic only made the boy ill. One fine Autumn day she had his bed moved outside in the courtyard. “I gave him some more poison in his medicine,” she told the police. “And then, suddenly, I remembered how beautifully my boy used to sing in church and I thought I would like to hear him once more. So I said: ‘Sing, my boy. Sing me my favorite song.’ He sang it in his lovely, clear voice.” The song ended in agony. The poison had done its work. [John MacCormac, “Murder By Wholesale: A Tale From Hungary,” New York Times (N.Y.), Mar 16, 1930, p. XX3]

1935 – Julianna Nagy (professional poisoner)  – They all got their wish, dying from her food. The old maid induced the old man to marry her by the simple process of threatening to resign as cook. But there were five children to inherit which would not leave much for the widow in case something should happen to Nagy. Therefore Julianna bought more fly-paper with which she made little angels, one after the other of all the five children. 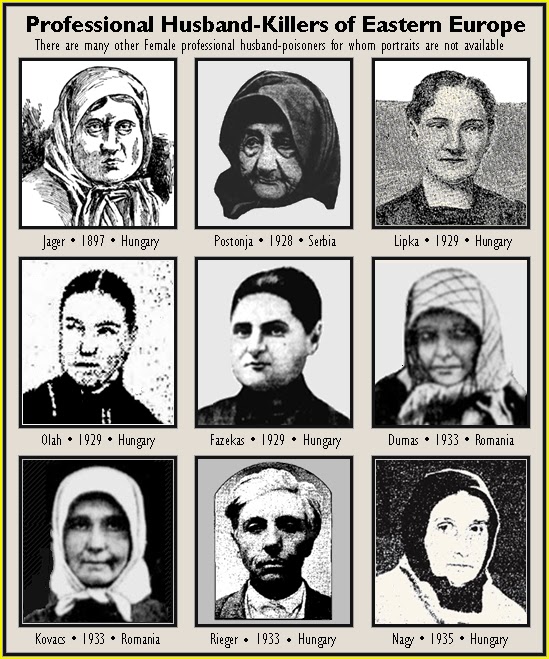 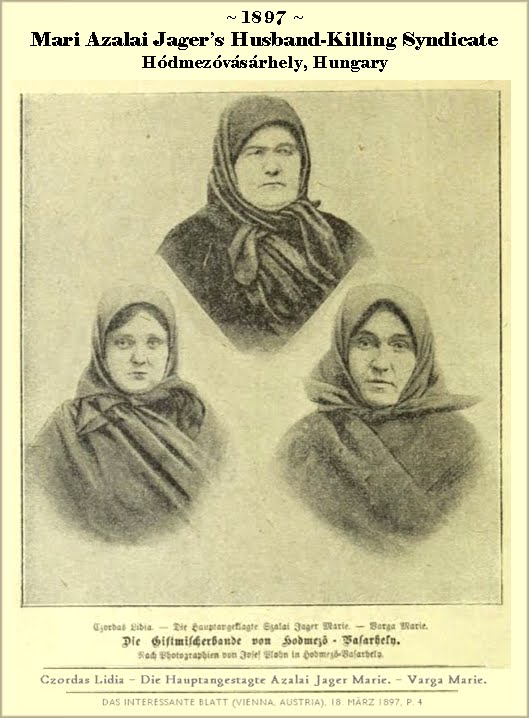 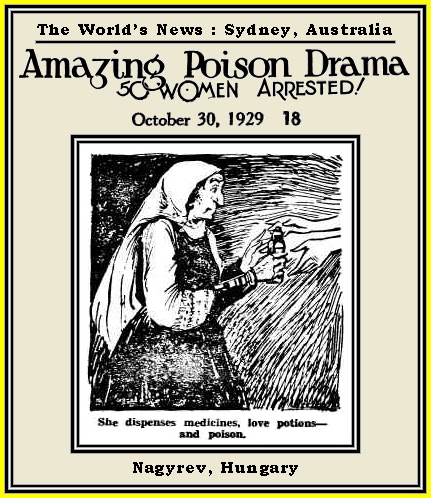 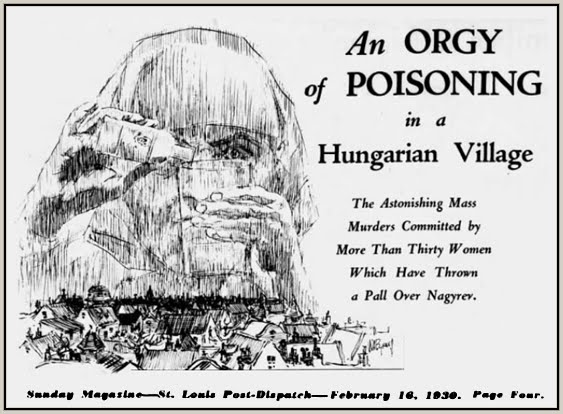 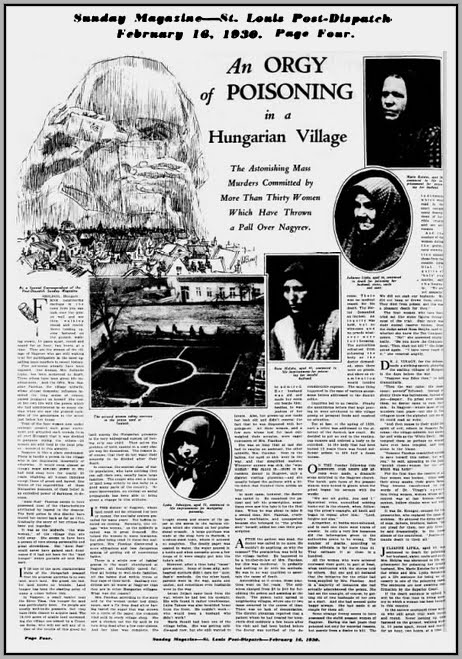 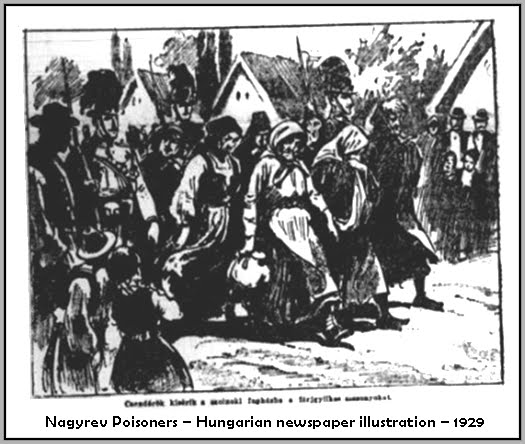 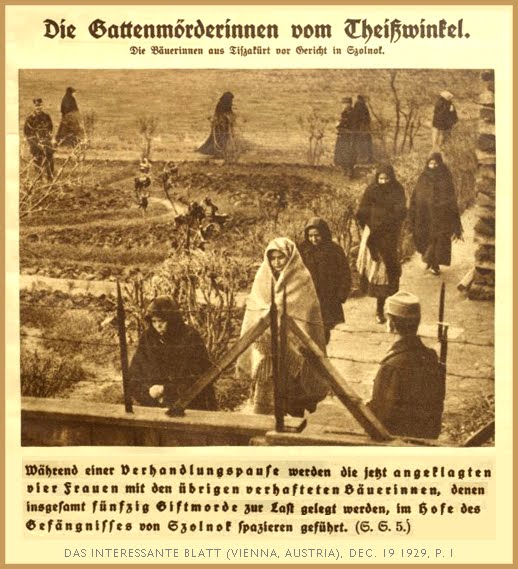 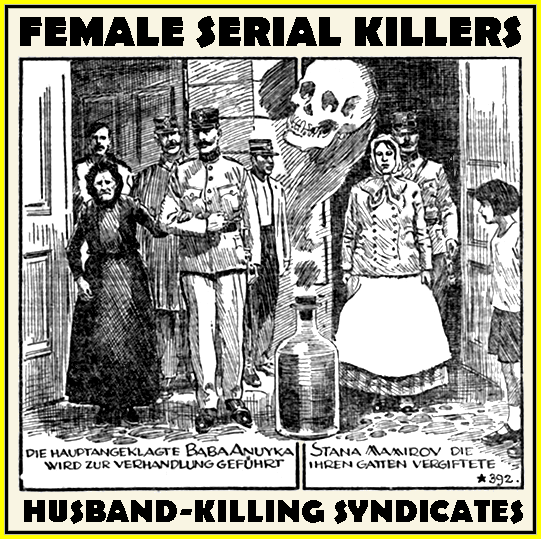 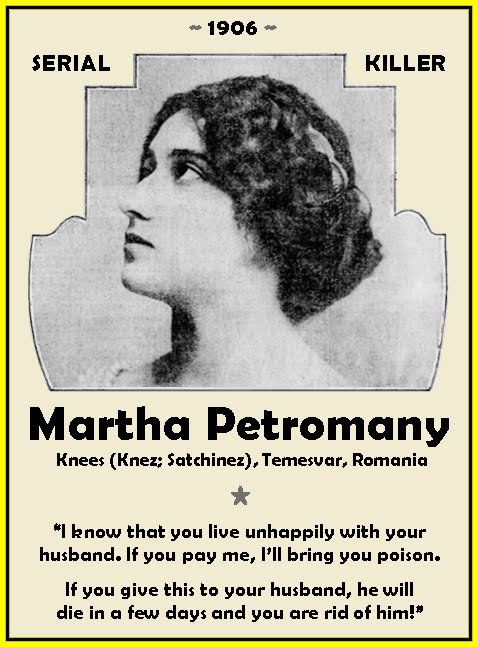