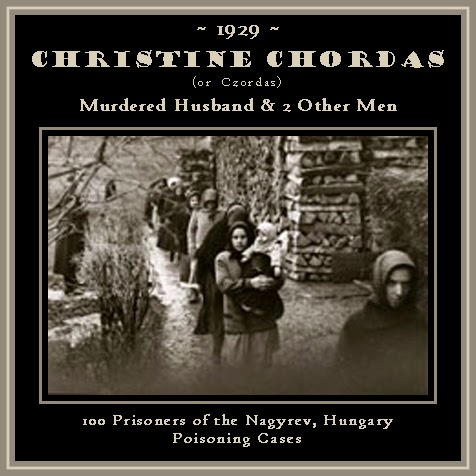 FULL TEXT: Budapest, June 17. – Two women participants in the mass poisonings of Theiss valley, one of the strangest and most ghastly chapters of modern crime, were hanged today at Szolnok, Hungary.

They were the wife of Laszlo Szabo and the widow of Balint Chordas, sentenced for poisoning Frau Szabo’s father and uncle in March 1925.

Both fainted when they saw the gallows, and they were hanged simultaneously while unconscious. By the Hungarian method, the victim’s feet are drawn apart by two assistants while a supporting stool is knocked from under. The hangman holds the victim’s face with a handkerchief, turning it from side to side until convinced death has occurred, when he lifts his hat and informs the president of the court that sentence has been carried out.

The two women executed today were the second and third to die on the .gallows in Hungary within the past 50 years. The first was Marie Kardos, executed January 13 for murder of her husband and son in connection with the same case. Her lover shouted beside the gallows as she was hanged.

Sentence was imposed on Esther Szabo and Christine Chordas June 21 of last year, while Joseph Madarasz and Laszlo Szabo were sentenced to life imprisonment. The sentences were reviewed later by the court of appeals.

Altogether 34 persons were tried for murder by poisoning of 42 others, the victims in nearly all cases being husbands, brothers fathers or mothers of the defendants.

Most of the crimes took place in the two neighboring villages of Nagyrev and Tiszakurt, the poisoning in all cases was by arsenic and in at least 20 cases it was supplied by the village midwife, Susie Olah, known as “Aunt Susie.”

NOTE: There is confusion in English newspaper accounts, with some of them reporting in long articles on the T Valley “Widow Makers” that Mrs. Chordas committed suicide (with lye, or by hanging herself). It is likely that this results from confusing her story with that of Fazekas. Some reports give the widow’s first name as “Balint,” although this is the name of her husband.