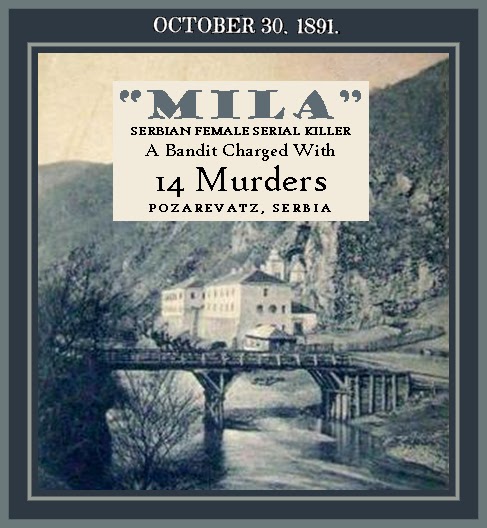 FULL TEXT (Article 1 of 5): Vienna, Oct. 23.—A female brigand named Mila is being tried for some of her crimes at Posezarez [Požarevac], Servia. She has been for a number of years a terror to the people of that region, and her crimes and cruelties far exceed those of ordinary brigands in Turkey and Servia. Mila is accused of fourteen murders and numerous robberies, and a peculiarly unfeminine feature of her deeds of blood was that she horribly mutilated her victims. In audacity and cruelty she had no equal among outlaws. She is not good-looking and has a nose like a hawk.

FULL TEXT (Article 2 of 5): A very romantic story is to hand from Bosnia regarding the career of a woman named Mila, who has been sentenced to death by the district court of Pazarevac, in Servia. This woman, it appears, has for ten years been the terror of North-eastern Servia. In 1881 a reward of 200 ducats was offered for her capture, two years later 500 was offered, and in 1890 the promised reward was increased to a thousand ducats. She had a band of devoted Haiducks with whom she committed her robberies. She never went about otherwise than in man's dress, with all her weapons in her belt and a rifle over her shoulder. Young, handsome, and a perfect markswoman, she was the idol of her band. She had a lover named Petrovitch, who fell ill some time ago, and whom she nursed with devotion in a cave on the Roumanian frontier. Her people told her in good time that she was watched and must fly for safety; but she refused to abandon her sick lover. After a fight with the gendarmes, two of whom she killed, she was captured. In the court she spoke for over an hour in her defence, and when sentence was pronounced listened to it with indifference.

FULL TEXT (Article 3 of 5) (Translated from German): The wildly romantic past of the Serbian Haidukin Mila, which was recently sentenced to death by the district court of Poscharevatz, states a report by "Frkj. Zig." As soon as the sentence, very unusual for a woman, was pronounced, it was commuted. "Miss Mila" for ten years had been the terror of all northeastern Serbia. In 1881, the government set a price of 200 Ducats on their heads. Two years later he who killed them or brought them in alive could already make double the money, and in 1890 the price for them rose to 1,000 gold ducats. Mila has hardly any equal in audacity and presumptuousness with regard to the acts of horror she has committed, and certainly no worthy rival. When the news that Mila, with a contingent of her blindly devoted Haiduks, was the vicinity, spread in a hamlet or marketplace in northeastern Serbia, panic would break out. People would rush to the church or pray at home and they would sharpen their weapons to prepare as best they could for the coming fight against the dreaded gang whose leader she was

Mila committed her first murder on a certain Stankovic, near the Romanian border at the beginning of the 1880s. From then on, one heard of new bloodshed about every six months. With her this impetuousness Mila loved madly and eventually became a victim of her love; the lucky man a Haiduk of her band named Petrovic. Months ago he became seriously ill, was taken to a cave near the Romanian border, and Mila nursed him with a devotion that only a woman is capable of. Although she was warned, although she healed him,  the authorities got news of her abode, and despite a good opportunity to escape, she DID NOT want to leave her terminally ill lover at his own expense. At his camp she was fiercely attacked; she shot two gendarmes, but was then then arrested  Never but in men's clothing, armed with rifle, pistol, and yatagan (Turkish sabre), Mila boldly undertook the dreaded raids. She shot masterfully and seldom missed her target on. At the same time this woman was beautiful, young and of magnificent figure. In Pozharevatz, before the Tribunal pronounced the death sentence, she delivered an hour-and-a-half speech of defense, and she did not flinch when the President announced that justice would be fully implemented.

FULL TEXT (Article 4 of 5): The Haidukin Mila, who, in association with her husband, the notorious Haiduken Petar, has been the terror of eastern Serbia for years, extending her raids to Hungary and Rumania, has now received her final verdict. The Belgrade Tribunal sentenced her to death for not less than seven acts of robbery, two of which were involved murder charges, and she has been pardoned by the Regency to a twenty-year imprisonment. The strong, beautiful woman, less than forty years old, had repeatedly fallen into the hands of the pursuing Pandours [light infantry unit of the Habsburg Monarchy], but every time they captured, she was triumphantly rescued from the dungeon. The last time, when the Petar's hiding-place, with the help of the Hungarian and Romanian authorities, had been discovered just in the corner where Hungarian, Serbian and Rumanian borgers met, only Haidukin Mila and her two small children were able to flee, Petar himself broke through the chain of the Pandours and Solderin, who had surrounded Hans, wearing only his shirt, but his rifle in his hand.

It was known that he would not go away until he brought his wife and children to freedom, and then they made plans to seize the dreaded bandit. While avoiding the place where his wife was kept in safekeeping with the two children, the persecutors followed in his footsteps and, after truly desperate resistance, found death through the bullets of the Pandours. Without a verdict, the dangerous Haiduk had received the reward for his wrongdoing. His wife, however, was put on trial and sentenced to death. Now she has been pardoned. Apparently, it was the first time in Serbia that the death penalty was carried out in the feminine realm, and all the more so because in Serbia the death penalty was carried out by shooting and it would have been a very unusual spectacle to have a woman shot.

FULL TEXT (Article 5 of 5): It is reported from Belgrade: The Haidukin [paramilitary brigand] Mila, who was sentenced in 1891 for numerous robberies and acts of great cruelty, sentenced to  life-long forced labor, died in the Pozarevaper prison. She and her husband, the Haiduk Petar, were for many years the horrors of Pozarevatzer. Only with the support of the Hungarian and Romanian border authorities was it finally possible to capture the dangerous Haiduk couple. Haiduk Petar was sentenced to death and was shot. Two children of this Haiduk couple were placed in the Belgrade orphanage.

WIKIPEDIA: The Serbian hajduks (Serbian: хајдуци / hajduci) were brigands and guerrilla fighters (rebels) throughout Ottoman-held Balkans, organized into bands headed by a harambaša ("bandit leader"), who descended from the mountains and forests and robbed and attacked the Ottomans. They were often aided by foreign powers, the Republic of Venice and Habsburg Monarchy, during greater conflicts. The hajduks are seen as part of the Serbian national identity. In stories, the hajduks were heroes; they had played the role of the Serbian elite during Ottoman rule; they had defended the Serbs against Ottoman oppression, and prepared for the national liberation and contributed to it in the Serbian Revolution.[1] The Chetniks saw themselves as hajduks, freedom fighters. The hajduk movement is known as hajdučija (хајдучија) or hajdukovanje (хајдуковање). Ranks included buljubaša and harambaša, adopted from the Ottomans.
https://en.wikipedia.org/wiki/Serbian_hajduks 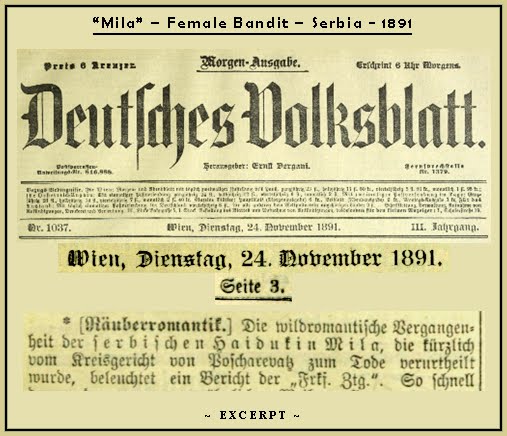 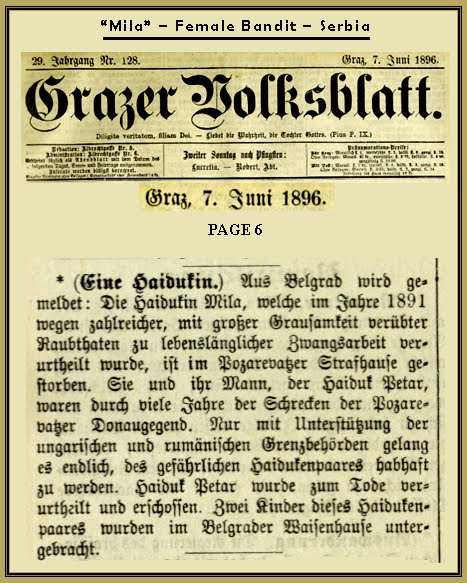 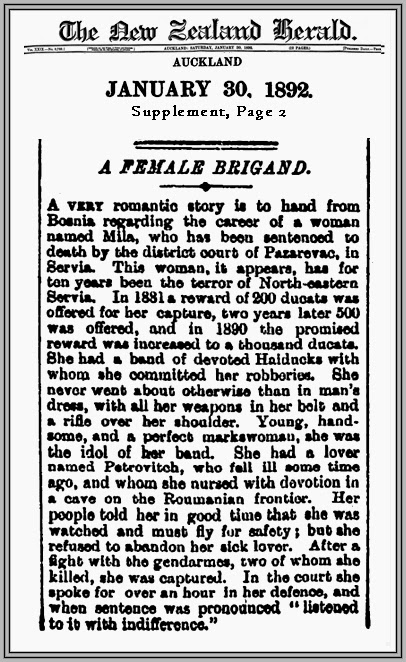 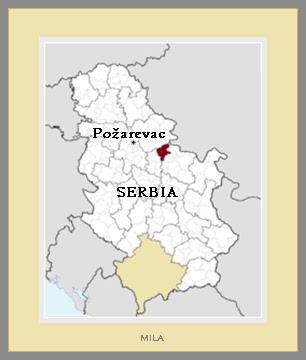