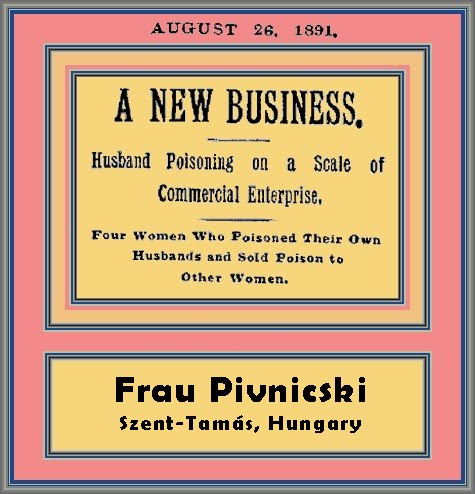 FULL TEXT (Article 1 of 5): Four women have been arrested at Szent- Janos, Hungary, [usually cited as Szent-Tamas] on suspicion of having poisoned several persons, and it has been discovered that they belonged to a gang of poisoners who could be employed by anyone desiring to remove an enemy. The leader of the gang is a woman named Mdme. Pionicski, who procured the poisons and mixed them skilfully with various liquors and articles of food. Those were purchased chiefly by women who desired to poison their husbands, or to have them poisoned by the women belonging to the band of professional poisoners. Three murders by means of Mdme. Pionicski’s poisons have been already proved, and other cases are now being investigated. Several influential ladies are compromised. The conspiracy was discovered accidentally by the son of Mdme. Pionicski’s lover finding in her room a quantity of arsenic, prussic acid, and laudanum, which he took to his father. The woman has completely broken down, and has confessed her guilt.

FULL TEXT (Article 2 of 5): VIENNA, August 26.— Four women have been arrested at Szenttamas, Hungary, on a charge of poisoning their husbands and selling poisons to women for similar purposes. Orders have been issued to exhume the bodies of many of the supposed victims.

[“A New Business. - Husband Poisoning on a Scale of Commercial Enterprise. - Four Women Who Poisoned Their Own Husbands and Sold Poison to Other Women.” syndicated, Oakland Daily Evening Tribune (Ca.), Aug. 26, 1891, p. 1]

FULL TEXT (Article 3 of 5): Budapest, Feb. 5.—A sensational trial may shortly be expected in Hungary in connection with the charges of murder brought against three old women who were arrested at Szent Tamas last summer. These women are said to have poisoned at least 10 peasants at the instigation of the latter's wives. It appears that of recent years there have been numerous cases in Southern Hungary of peasant women ridding themselves of their husbands by employing poisoners, and it is reported to have reached such a pitch that the demand has created a class of “professional poisoners,” to which the three accrued in the present proceedings are said to belong. The police doctors appointed to examine the remains of the victims have testified to the presence of arsenic in the bodies, and the judicial tribunal at Neusatz Ujviddk, on the Danube, where the inquiry was held, has decided to indict the three women for murder. The prisoners, whose names are respectively Rivnicski [or, Pionieski], Kurjakow, and Kernaez, are detained in custody pending the trial, which will come on for hearing at an early date.

FULL TEXT (Article 4 of 5): Some sensational revelations were made during the trial of the three peasant women named Pionieski, Kurjakow, and Kernaez, who were charged with having committed a series of murders by moans of arsenic poisoning at Neusatz Ujvidek. Pionieski is accused of poisoning her husband and her father, Kurjakow of poisoning her lover, and Kernaez of murdering in the same manner her husband. The first part of the proceedings were devoted to the examination of the woman Kernaez. In reply to the questions the accused declared that her late husband was suddenly seized with convulsions last year, and died on the fifth day after being thus attacked. She admitted that she had a lover whose name was Csirits, and that serious quarrels had occurred between her husband and herself on account of her relations with this man. She was unable to offer any explanation as to the presence of arsenic in the body of her husband. The mother and daughter of the prisoner, however, and several witnesses who were called, stated positively that the husband of the accused had died very suddenly, and that the symptoms of his illness seemed to point to foul play. The report drawn up by the doctors who made the post-mortem examination of the bodies, and the analysis made by the District Sanitary Council were then read to the court. It was stated that distinct traces of arsenical poisoning had been found in the bodies of the husbands of the prisoners Pionieski and Kernaez, but that on the other hand, the quantity of arsenic discovered in the body of Stojsits’ Kurjakow’s lover was comparatively small. During the public prosecutor’s speech, the woman Pionieski, who is accused of two murders, those of her husband and her father, looked extremely dejected. At one point she was overcome by faintness and commenced to weep and moan. The other two prisoners sat with their eyes cast to the ground, and they presented a crestfallen appearance. Sentence was pronounced on Saturday, Pionieski was found guilty, and was sentenced to penal servitude for life. Kurjakow and Kernaez were acquitted on the ground that there was not sufficient evidence against them, and were immediately set at liberty.

***
FULL TEXT (Article 5 of 5): Of recent years there has sprung up in Southern Hungary a class of what may be called "professional poisoners"— people who, for a pecuniary consideration, make a practice of ridding discontented peasant wives of their husbands. In Hungary the laws are so adapted as to give to the peasant women certain advantages on the deaths of their husbands. Owing to these laws it has come about that of late there have been numerous instances of the employment of these professional husband-destroyers, with the result that there are at present awaiting their trial at Nevsalz, Ujvidek, on the Daunbe, three women, Pivulcski, Kurjakow and Kernacz who are charged with having practiced extensively in this profession, It is stated that the prisoners, who were arrested at Szent Tamas, have poisoned, at the instigation of discontented wives, no fewer than ten peasant husbands. The police surgeons have discovered signs of arsenic In the body of each of the victims. The trial is expected to come for hearing at an early date, and in view of the prevalence of this gruesome practice in Hungary very startling disclosures are expected.


FULL TEXT (translated from German): In the municipality of Szent-Tamás in Hungary, a whole series of nasty crimes have been discovered. Four women were arrested as alleged poisoners under weighty evidence. The head of the gang is a widowed woman Pivnicski. For some time now, the police had followed the bustle of this woman with excitement, but only in those days did a feast bring the shameful activity of this shrew into the sunlight.

Her lover's son, Alexander Legyensski, came to the Pivnicski's house, and since he did not meet anyone, the fellow went over to a roast goose standing on the table.

The food aroused his appetite and he opened all the cupboards to find something edible. Instead, he found a box with the words "rat poison."

The boy, who did not like Pivnicski, brought the find to the police, and a house search revealed other poisons, including arsenic, which the poisoner sells to women who want to get rid of their husbands. Then they are arrested horrible woman, who confessed everything during the interrogation, and in the process even implicated several ladies of the local area. In Szt.-Tamás three exhumations were carried out, which showed that the victims died of poisoning. Graves were dug up in four neighboring villages as well. 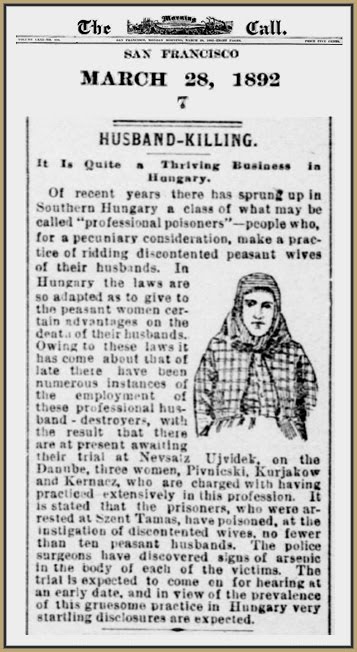 Previously on this post the locale of Szenttamas, which is a village name in Hungary, Serbia and Romania was incorrectly identified as in Serbia. 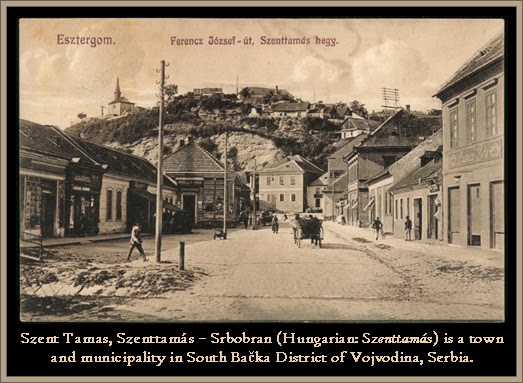