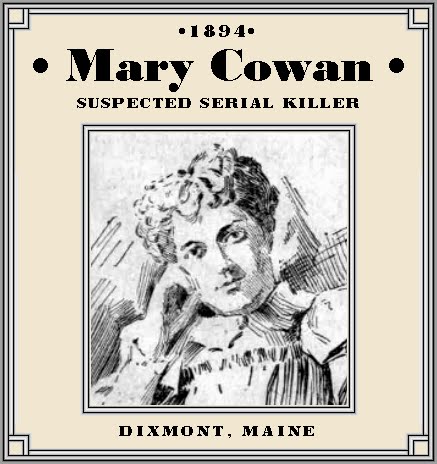 FULL TEXT (Article 1 of 3): Bangor, Feb. 8.— An indictment has been specially reported by the grand jury against Mrs. Mary Cowan of Dixmont, charged with murder by poisoning her boy, Willie Cowan [in September 1894]. The woman was arrested and lodged in Penobscot county jail, today. It is also alleged that she poisoned her former husband and children. 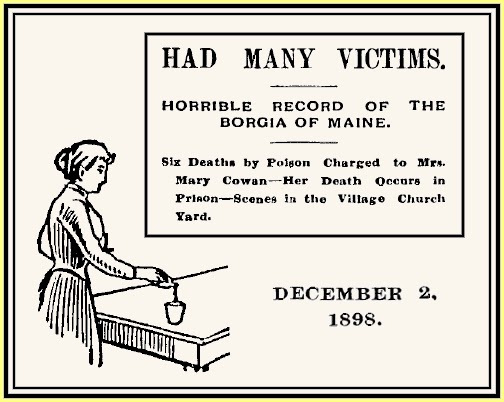 FULL TEXT (Article 2 of 3): Mrs. Mary Cowan, convicted a year ago of poisoning her child, has prepared a statement protesting her innocence and declaring she is the victim of her husband’s plot to get rid of her. Her statement includes letters from physicians who attended one of her husbands when dying and they declare his death was not occasioned by poison. These letters are misspelled and in other ways indicate that the alleged physicians who wrote them are not conspicuous for intellectual attainments. 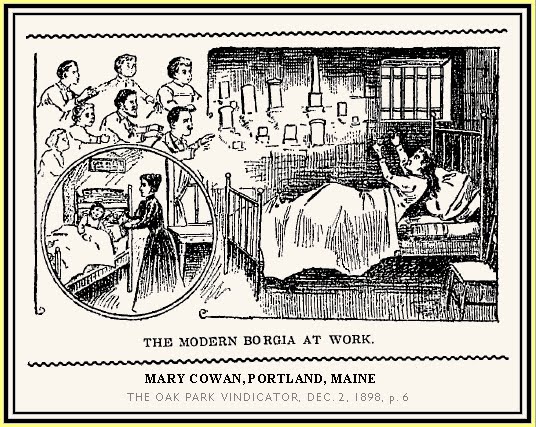 FULL TEXT (Article 3 of 3): A remarkable history of crime was closed by the death in the Maine state prisons at Thomaston a few days ago of Mrs. Mary Cowan, a life convict. Mrs. Cowan was either a monster or a martyr; a cold-blooded murderer, or the victim of strange coincidences. Her maiden name was Mary Knight, and she was three times married. Her first husband was Willis Bean of Dixmont, Maine, in which town she also lived with her parents. Bean was the son of a farmer.

Soon after his marriage he conceived the desire to become a physician. Mrs. Bean encouraged her husband in this design, and also expressed the intention to study medicine herself. They had little money, and, furthermore their three children were regarded as an obstacle to the accomplishment of their plans. One day the youngest of the children was found smothered in bed. A neighbor made the discovery, and it is said that Mrs. Bean, when informed of the fact, carelessly remarked:

“Oh, I know it; the child died half an hour ago.” No investigation was made, but the people of Dixmont suspected that the mother caused the child’s death in order to be rid of it.

Soon after the other two children, aged 2 and 3 years, died of a stomach-complaint. There was suspicions whispered among the neighbors, but the deaths of the Bean children were forgotten for a time after they were laid away in the village churchyard at Plymouth.

Bean pursued his medical studies in what was known as a druidcal institute, where, it was said, diplomas could be purchased for $25 or less. The legislature regarded this concern as a fraud, and passed a law that killed it before Bean had secured his diploma, and both husband and wife then decided to attend a similar institution in Ohio where without much study they might get diplomas. Before leaving Bean prevailed upon his parents to invest all their ready money in a farm, upon which he was to live when he returned from the west. The farm was purchased and Bean received the deed, giving to his parents a mortgage. For various reasons this mortgage was never recorded, but was kept in the house of the elder Bean. 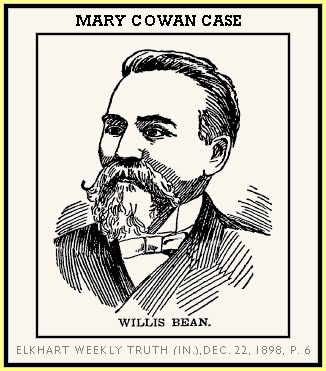 Willis Bean and his wife then borrowed $200 and went to the Ohio medical school. Soon afterward came a letter from Mrs. Bean saying that Willis had died suddenly, and that the doctors could not tell the cause of his death. It afterward developed that it was a stomach trouble, similar to that which caused the death of the two Bean children. Mrs. Bean came home to stay with her husband’s parents, and when she had been there a few weeks it was discovered one day that the unrecorded mortgage had disappeared. Young Mrs. Bean had the deed of the farm, and so the land, bought with the elder Bean’s money, was hers in law. She sold the place and all upon it, realizing about $2,000. and the elder Bean was so much, the poorer for his carelessness in not haying the mortgage recorded. No one in Dixmont had any doubt that she stole the mortgage.

A short time afterward the widow Bean married George Taylor, who belonged in Dixmont and was employed in one of the Lewiston mills. Taylor was an Odd Fellow, and it was supposed that he had some insurance in that order. He soon died of the same stomach trouble that carried off the Beans, children and father. After his death the-fact developed that he had not paid his dues in the Odd Fellows’ Lodge, so that his insurance had lapsed; but the members, contributed a fund of several hundred dollars for the widow.

Mrs. Taylor did not long remain a widow; but married a man named Elias Cowan, a widower with one child, Willis, aged 8 years. Cowan had deeded his farm to his wife, at whose death the property descended, by the laws of Maine, to the boy, the father having the entire income of the place until the boy attained his majority, and after that, during his lifetime, one-third the income. One day in September, 1894, the boy died, and the cause of his death was the same stomach trouble that had affected the Beans and Taylor. This case was investigated, with the result that Mrs. Cowan was arrested upon the charge of having killed the boy with arsenic. 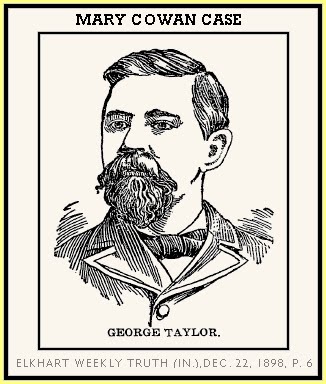 The body was exhumed and the stomach and intestines sent to Bowdoin college for analysis. The chemists reported that the stomach contained enough arsenic to kill an ox. Mrs. Cowan was convicted of murder in the first degree and sentenced in February 1896 to a life term at Thomaston. It was lately learned that previous to the death-of the boy, Elias Cowan, the Father was ill with the same kind of stomach trouble, and that at that time Mrs. Cowan supposed that the farm was her husband’s, not the boy’s. A doctor who lived in the neighborhood and was familiar with the circumstances attending the deaths of other members of Mrs. Cowan’s families, is said to have told her that if her third husband died of this mysterious stomach trouble there would be an investigation. Cowan recovered; but there are people in Dixmont who declare that this was merely a respite for him; that his turn would have come very soon after the death of the boy had not Mrs. Cowan been arrested and her career as a poisoner stopped.

There was plenty of evidence at the trial to convict Mrs. Cowan, and a good deal has leaked out since. A little girl of the neighborhood saw her put a white powder into the boy’s medicine, left by the doctor for an ailment supposed to have been caused by previous doses of the same white powder, but her father would not allow her to testify, saying: “If I should let her tell what she knows and Mary Cowan should not be convicted, the child’s life wouldn’t be worth a cent.” from which it was understood that he feared that Mrs. Cowan would poison his child also.

In village churchyard in Plymouth are eight graves that have a peculiar interest for the people thereabouts. In a row are four mounds marking the resting places of Willis Bean and his three children. A little removed from these lies George Taylor, the second husband, and near by is the grave of a child born to Mrs. Cowan while she was a prisoner in Bangor jail, awaiting sentence. Young Willis Cowan lies beside his mother, and the other day, in a corner by itself, the old sexton laid the body of Mrs. Cowan.

Mrs. Cowan always maintained that she was innocent, but there was nothing to support her assertion. There never was any reasonable doubt that she poisoned her stepson, and many believe that she hastened the departure from this life of at least five other persons, all for the sake of a little money. She was a remarkably clever woman in many ways.

[“Had Many Victims – Horrible Record Of The Borgia of Maine. – Six Deaths by Poison Charged to Mary Cowan – Her Death Occurs in Prison – Scenes in the Village Church Yard.” syndicated, Oak Park Vindicator (Il.), Dec. 2, 1898, p. 6]

Note: The illustrations of Mr. Bean and Mr. Taylor do not appear in all publications of the syndicated article. These images are taken from an identically titled article in Elkhart Weekly Truth (In.), Dec. 22, 1898, p. 6 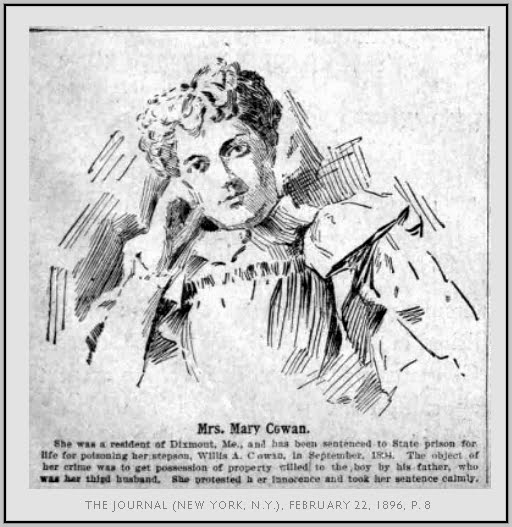 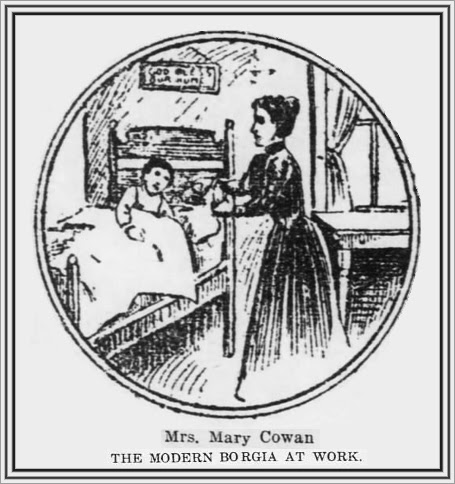