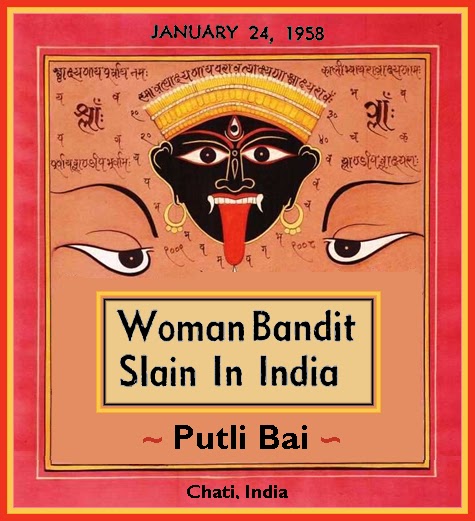 FULL TEXT (Article 1 of 2): New Delhi, India — Word reached New Delhi Saturday of the murder of 11 villagers in a revenge raid led by a woman dubbed India’s bandit queen. Newspaper accounts from Rewa said the gang also wounded five persons in the nearby village of Datia and carried off several others into central India’s Vindhya hills.

The gang reportedly was led by Putli [Putli Bai], a woman said to be in her 20s who has become one of India's top public enemies.

The dispatches said Putli led her men info Datia Wednesday because she suspected its inhabitants had given information about her to the police.

FULL TEXT (Article 2 of 2): Bhopal, India – Putli [Putli Bai], a woman bandit leader whose gang has terrorized large areas of Central India for the last three years, was killed Thursday [Jan. 23, 1958] with nine of her followers in a running gunfight with police.

The 32-year  Putli and her lover, Bandit Kalla Gujar, were killed along with other members of the gang outside the village of Chati, about 150 miles south of New Delhi.

Putli – her name means “doll” – was a dancing girl who was kidnapped by a bandit named Sultana [Sultana Daaku] seven years ago.

She was released in return for ransom but later agreed to go back to join Sultana’s gang as a police spy. Instead, she fell in  love with him. She remained as his trusted lieutenant and bore him two children.

Sultana, accused of 84 murders, was killed by police three years ago but Pulti escaped. She joined another gang, quarreled with its leader and shot him down.

For the past three years she has run her own gang, operating in inaccessible jungle and ravine country south of Agra.

She was wanted for a number of murders, lootings and kidnappings.