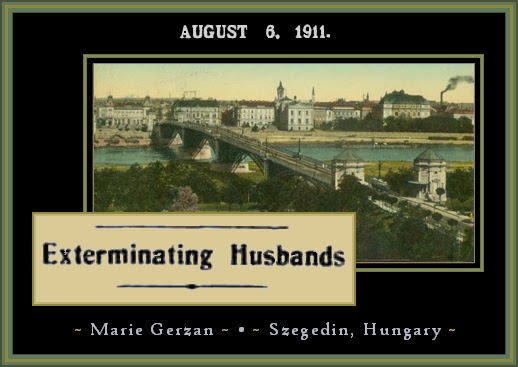 FULL TEXT (Article 1 of 2): Some suspicion was caused at Szegedin, a town in Southern Hungary, recently, by the number of deaths resulting from a mysterious wasting disease, which medical men failed to diagnose. It was noted as a singular circumstance that all the victims were married men, and post-mortem examinations ordered in eight cases showed that death had resulted from poisoning. Further investigation resulted in the arrest of Marie Gerzan, a professional nurse, on a charge of wholesale poisoning. A young woman named Levai was also arrested as Gerzan’s accomplice. It is alleged that Gerzan undertook to rid wives of burdensome husbands, hence all her victims were married men. Her arrest was brought about by the suspicion excited on the death of Levai’s husband from the “wasting disease” that so puzzled the doctors. A quantity of poison was found by the police in Gerzan’s house, which she stated she used to destroy vegetable parasites. 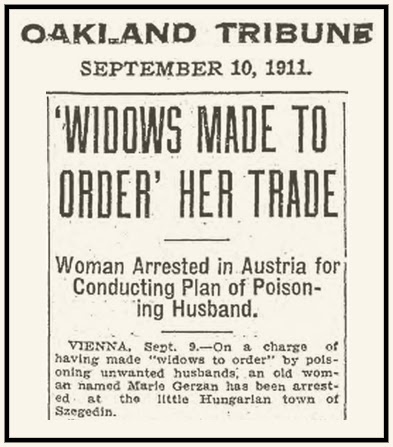 FULL TEXT (Article 2 of 2): Vienna, Sept. 9. – On a charge of having made widows to order by poisoning unwanted an old woman named Marie Gerzan has been arrested at the little Hungarian town of Szegedin.

Frau Gerzan is a well known local figure and has been employed as a nurse by practically every family in the town. A skilled herbalist, she had a flourishing trade in her homemade quack medicines. For some time past an unusually large number of married men have died of a mysterious wasting disease but hitherto there had been no suspicion of poisoning

A short time ago however when Herr Josef Levai died his relatives communicated with the police and demanded an autopsy. Distinct traces of poison were revealed by the postmortem and following further investigations. Frau Levai, a young woman and Frau Gerzan were arrested.

The authorities ordered the exhumation of several bodies of men whose deaths had been shrouded in mystery and in eight cases traces of the preparation with copper as its been found in Frau Gerzan’s house resulted in the discovery of a quantity of poison but the woman denies the charge and says that she used the poison for spraying vines. 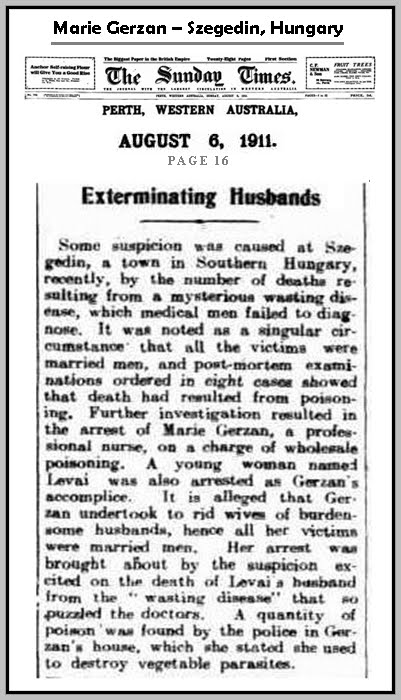