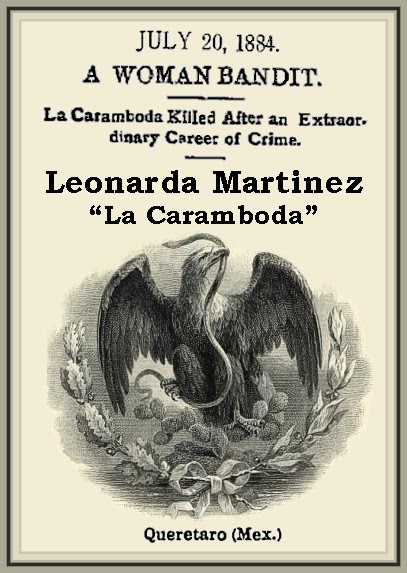 The term “carambada” (spelled as “carambada” in the following articles) suggests a woman who causes amazement or astonishment.

FULL TEXT (Article 1 of 2): Queretaro, Mex., June 4. – A short time ago the authorities discovered that the celebrated brigand and abductor, El Amito, noted as the leader of a considerable party of bandits, and a woman named Leonarda Martinez, or La Caramboda, a brigandess who in former times alone halted the diligences on the public roads and robbed them, had formed a scheme to abduct a wealthy gentleman, Don Civelo Vasquez, owner of the San Juanico hacienda, or one of his sons, and hold him for ransom. The woman was to demand $10,000 of Vasquez as the price of freedom from molestation. The matter getting out, Leonardo and several members of a Milos band were captured. A few days afterward they were sent to Guanajuato, and news has reached here that the bandits, under El Amito, with a view of rescuing these prisoners, attacked the escort of rural guards at a place called La Connindad. A sharp fight ensued, in which three bandits were killed and Leonardo mortally wounded, the troops retaining or killing all their prisoners, and putting the bandits to flight, with the loss of one man wounded. Leonarda has since died of her wounds.

NOTE: The original article uses the masculine spelling of “Leonardo” which is, necessarily, an error, which has been altered to the feminine here.

FULL TEXT (Article 2 of 2): La Caramboda, the woman brigand long a terror to travelers in this region is dead at last, with a bullet in her heart. Her operations extended over many years and was of the most daring description. For a long time the authorities found it very difficult to trace or even to explain the crimes which she committed, for no one suspected that a woman was the guilty person. No two of her robberies were committed in the same manner. Sometimes she was a passenger, and other times she was with the bandits, and took part in the shooting, if any was to be done. A woman of some personal charms, when appropriately dressed, she was a fiend when about her business of murder and pillage whom very few cared to encounter. Her male assistants were many and devoted.

One of her schemes, it has been learned was to bide her time in some town until she found one or two men of means who were going by the diligence to some distant point and then to take passage with them. It is suspected that on more than one occasion she took the driver into her confidence, but when this could not be done she readily deceived him or quieted him with a bullet. A perfect mistress of the art of dissimulation and possessing a soft and insinuating manner, she had no difficulty in working herself into the good graces of travelers who did not look for a Mexican bandit under her attractive guise. In this way she easily discovered who had money and valuables and who had not. If she found a man who appeared to be of some consequence, but she did not have much money, she betrayed him into the hands of her confederates, who held him for a ransom. If her victim appeared to be well supplied with cash he usually met a violent death within twenty-four hours.

Leaving a town before daybreak in company with two travelers whom she had marked for robbery she would coyly accept the customary innocent attentions at their hands and perhaps indulge in a little conversation with them. An hour later, when well on the journey, watching her opportunity, she would draw two revolvers, and, before they could detect her movement, lodge a bullet in the back of each of them. The driver, busy with his team, and perhaps paid not to be too attentive to what was going on behind him would not disturb her. With her booty secure she would take her own time about leaving the stage, always waiting till a point convenient to the fastness of some if her confederates was reached.

It was known that the highways were infested with robbers and it was not bought strange that an occasional murder was perpetuated, but .the similarity between several cases soon attracted attention and various experiments led to the discovery that a woman, operating first on one road and then on another, was at the bottom of them. The plausible stories told by the drivers served to mystify them more than anything else. They always asserted that highwaymen had done the work, and if injury was made at one end of the route or the woman who always started it was always said that she arrived at her destination unmolested. The absence of telegraphs and any regular means of communication made it possible to keep up this deception for a long time.

When the woman found that she was suspected she abandoned this plan of operations and, remaining with the robber band to which she was attached, devoted the greater part of her time to the abduction of wealthy agriculturists. Her plan in these cases was very much the same as in her stage robbery enterprises. First wining the confidence of her intended victim and getting him involved in some intrigue, she would betray him at the proper time into the hands of her associates, who would spirit him away and presently open negotiations for his return. While these were in progress he would be busy setting her net for a fresh victim a hundred miles away. La Caramboda’s latest exploit was unsuccessful. She was hovering about the San Juanico hacienda with the intention of securing the abduction of Don Civelo Velasquez or one of his sons, when a fellow, who had long served in her train, deserted and communicated her secret to he authorities. They made elaborate reparations to capture her entire party, but, failing in this, they made sure of her and soon had her in irons. Hearing of her fate, her followers determined on a rescue. They pursued the officers for early twenty miles, and, overtaking them at Conninded, opened fire at once. The troops returned the shots, and a lively engagement ensued, in the course of which three of the bandits were killed and the others put to flight. When the troops approached their prisoner after the flight they found her dead, presumably from a bullet fired by her own friends. The chains were removed from her limbs and she was buried by the roadside. One of her captors describes her as a beautiful woman, not more than thirty years old, with clear complexion and long and abundant hair, but with a wicked eye and a cruel-looking mouth when in repose. 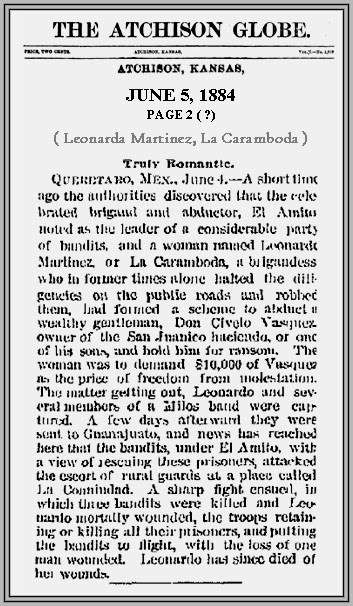 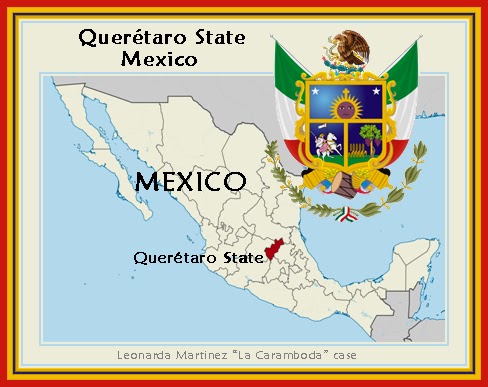