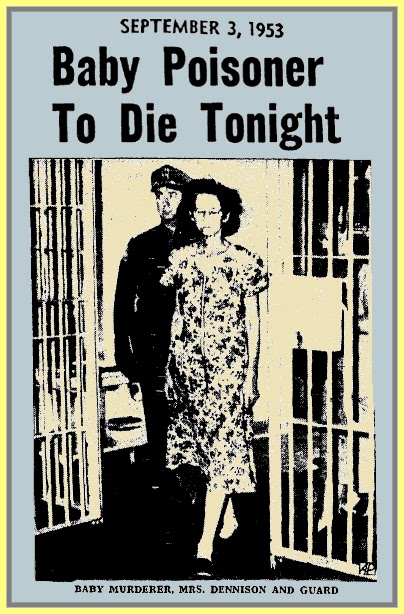 According to cultural Marxists women are inherently non-violent and are always compassionate and nurturing (except when the patriarchal conspiracy forces them to be naughty). This is poppycock. Sociopaths are sociopaths regardless of sex. And social engineering control-freaks with their delusions of Utopian dictatorship are dangerous white collar criminals whether they be commissars in the Soviet Union, Khymer Rouge Cambodia, East Germany, National Socialist Germany or in present-day Sweden, UK or USA.

***
FULL TEXT: Montgomery, Ala. – Gov. Gordon Persons today refused to spare the life of Mrs. Earle C. Dennison, the nurse who poisoned her infant niece and must die in the electric chair tonight.

In a dramatic announcement to newsmen following a clemency hearing, Pearsons said. “I will not interfere with the sentence.”

His refusal to intervene means Mrs. Dennison, 55-year-old former hospital nurse from Wetumpka, Ala., will become the first white woman ever electrocuted in Alabama.

Mrs. Dennison is scheduled to die shortly after midnight at Kilby Prison.

The governor said, "I am sorry, of course, to have to be the governor to make this decision for the first time. The poisoned child is just as dead as if the crime had boon committed by a man "God bless Mrs. Dennison's soul."

Persons' decision come despite a last-minute plea from the condemned woman to "have mercy on me. Save my life."

The gaunt, 85-year-old widow, clad in a plain black dress, sat impassively-throughout most of her clemency hearing before the governor's legal adviser, William N. McQueen.

But her nerves gave way and tears welled in her eyes as she whispered her, simple plea.

She is to pay the penalty for the arsenic poisoning of 2-year-old Shirley Diann Weldon, who died in convulsions in a Wetumpka, Ala. hospital on May 1, 1952.

The state contended she killed the Weldon child to collect $5,500 from two insurance policies she had on the tot.

She also was charged with killing Weldon child, Polly Ann, but was never tried for that offense. Arsenic was found in the bodies of both girls.

Mrs. Dennison, who had been chief operating room nurse at the Wetumpka, Ala., hospital, was arrested May 8, 1952, seven days after Shirley Diann died in convulsions at the hospital.

She admitted in two signed statements that she gave arsenic to the blonde, curly haired child in a soft drink during a visit to the Weldon home. Mrs. Dennison recalled that Shirley Diann had climbed affectionately into her lap and hugged her around the neck just before she swallowed the poison."

Then, when an autopsy was ordered on Shirley Diann’s body, Mrs. Dennison watched the operation which revealed the arsenic.