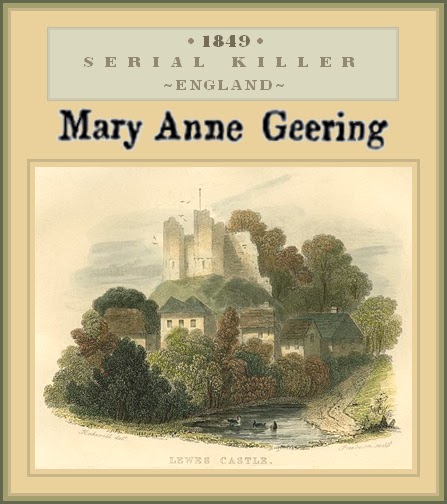 FULL TEXT: At Lewes Assizes on Wednesday, Mary Anne Geering, a woman of masculine and forbidding appearance, aged forty-nine, was arraigned for the murder of her husband and two of her sons, and for attempting to destroy a third son. The case with which the Court proceeded was that of Richard Geering, the husband, alleged to have been poisoned with arsenic by the prisoner. The evidence was much the same as that given at the sittings of the Coroner's jury. Fellow-labourers of Geering described how he was taken ill twice immediately after dining. Benjamin Geering, the young man whom it was alleged the mother had attempted to poison, related the circumstances of his father's death, and that of two of his brothers: the symptoms were those of poisoning.

He also described his own illness: two doctors attended him, and he was saved. His father and brother belonged to a burial club; this society made a collection of a shilling from each member for the burial of a deceased subscriber. A daughter and two other sons of the accused were examined. They had not heard complaints that their house was troubled with rats, or that it was necessary to have arsenic to destroy them; nor that arsenic was required for the horses which James Geering, one of the deceased, had charge of. Richard Geering had some money in the savings-bank: he and his wife often quarreled about it; the woman appears to have drawn most of it out on the death of her husband, the prisoner attributed his death to a family complaint, disease of the heart; the medical attendant was thus imposed on, and gave a certificate accordingly: he had treated the deceased for a bilious intermittent fever as the immediate disorder.

Mary Anne Geering had wished that her husband was dead; after his decease she was auxiliary to have the coffin screwed down quickly. Surgeons detailed the appearances presented when the corpses were exhumed: the internal organs exhibited the signs of an irritant poison. The viscera were sent to Professor Taylor. A large pill, evidently made by an unprofessional person, was discovered in a house. Dr. Taylor’s evidence was the most important: he found that all the organs of Richard Geering – even the centre of the heart – were impregnated with arsenic: he collected a portion, no less than seven grains. In the remains of George Geering he found no arsenic, but the appearances of an inflammation were those of poison.

He discovered the mineral in the body of James Geering. A portion of what Benjamin has ejected from his stomach contained arsenic; and the large pill was composed of arsenic, opium, and another ingredient. The chemists and a woman proved that the prisoner had several times bought arsenic, on pretenses which other witnesses had proved to be false. After a variety of minor evidence, the case for the prosecution closed. Mr. Hust, who had volunteered to act for the prisoner on her daughter’s begging that she might have counsel, rested his defence mainly on the absence of any strong motive for the crimes imputed: the money obtained from the club would be nearly swallowed up by the burial-expenses. After an absence of ten minutes, the jury found a verdict of "Guilty." Sentence of death was passed; which the prisoner heard almost unmoved.


FULL TEXT (Article 2 of 2): At 12 o'clock this day Mary Ann GEERING, convicted at the last assizes of the murder of her husband at Guestling, underwent the extreme penalty of the law on a drop erected in front of the county Goal.

On Monday evening she made a full confession of her guilt in having poisoned her husband and two sons, and attempted the life of her third son, Benjamin, who was the principal witness against her on the trial; and her penitence appeared to be so sincerely manifested that the chaplain did not hesitate to administer to her the holy sacrament. Having thus disburdened her mind, the culprit slept during the whole of Monday night. She awoke early in the morning and was at once attended by the Rev. B BURNETT, the chaplain of the gaol, who remained with her until the time of her execution.

The spectators were not numerous; not more than between 3,000 and 4,000 made their appearance, and no feeling was manifested when she mounted the scaffold. In about two minutes the necessary arrangements were completed and the wretched criminal ceased to exist.

The body, after hanging an hour, was cut down, very few persons remaining till that time. It was buried in the precincts of the gaol at 4 o'clock.