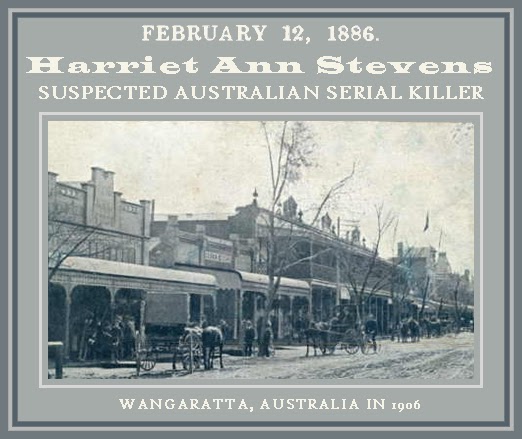 FULL TEXT (Article 1 of 3): Melbourne, February 11 – The inquest on the body of the farmer, John Plum, of Wangaratta, who was found dead in the debris of his house, which had been burnt to the ground on January 28, was resumed today. The woman, Mrs. Stevens, who was arrested on suspicion of having caused Plum’s death, was present in custody. The evidence disclosed a strong circumstantial case that Mrs. Stevens first poisoned the deceased, and then after robbing him set fire to his house. The police produced a purse with a deposit and receipts amounting to £2,440, and a roll of notes to the value of £285, which were found concealed in the back yard of the accused’s house, and these were sworn to as the property of the deceased. The police also produced bottles containing arsenic found on the woman’s premises. The evidence of the Government analyst disclosed the fast of a quantity of strychnine being found in the stomach of Plum. The accused gave very contradictory accounts of her whereabouts on the night that Plum’s house was destroyed, but one witness swore to having seen her at the man’s place that night. The inquest was eventually adjourned for a fortnight. It is rumored in the district that Mrs. Stevens killed her first husband, who died with symptoms of poisoning. Her second husband, from whom she is separated, swore some time back in court, when she summoned him for maintenance, that he had to turn her adrift as she was trying to poison him.

Note: The following article contains an unfortunate typo in which one of the names is spelled three different ways, making it impossible to determine which might be correct: Cootie, Coutie, Doutie.

FULL TEXT (Article 2 of 2): What is known as the Wangaratta tragedy is at present occupying a good deal of public attention in Victoria. On January 29 the house of a farmer named John Plum was burned down and his body was found in the ruins. It had been stated that Plum was known to have £300 in money in the house, and there was a suspicion that the fire was probably the work of a robber and an incendiary, especially as the first witness examined at the inquest proved that on the date on which the fire occurred there was no coin except a few pence discovered in the ruins; that witness called on deceased on business, and saw him in the wine cellar.

Sitting beside him was a woman who he knew as Mrs. Cooty. She was formerly Mrs. Cooty, but her proper name was now Mrs. Stevens, and she was the wife of a publican at Wangaratta, from whom she was separated. The evidence of the son of the deceased went to show that at the time of his death deoeased must have been in possession of a considerable sum of money. The witness stated that in the beginning of November he had given his father £165 in notes, the proceeds of the sale of some wheat. He knew his father to have then in his possession another £140, and another £10 in silver. The deceased never banked his money, but always carried it on his person. He had searched with Sergeant Steele, for coin in the ruins, but found none. The wife of the deceased also said that she knew him to have £300 in notes, three sovereigns, and over £10 in silver shortly before his death.

Arsenic having been found in the stomach of the deceased, the woman Stevens was arrested, and quite a sensation was caused in court when the police produced a roll of notes amounting to about £300, and deposit receipts amounting to £2100, belonging to deceased, and which had been found about Mrs. Stevens’ house, in the hollow of a log of firewood. The notes and receipts were in a purse, which was identified as having belonged to the deceased. Mrs. Stevens, who is suspected of having administered poison to Plum, and afterwards set fire to his house, claims to be a granddaughter of Sir John Moore, a general in the English Army, and her marriage certificate states that she is the daughter of a noncommissioned officer in the same service, who fought in Spain, and there married a Spanish woman. The latter is said to have died in giving birth to Mrs. Stevens, who was taken to Cornwall and there brought up. She came to the Ovens district many years ago, and was first heard of at Eldorado as the wife of a publican named Hird.

Several children were tho issue of this marriage. Hird died, and his widow married a farmer named Coutie [sic], who occupied a holding situated between Plum’s farm and Wangaratta township. Doutie [sic], in his turn, died about seven years ago, under rather suspicious circumstances. His death was preceded by strange spasms, which led many to believe that foul play had been practised, though this was never proved.

Having buried her second husband, the bereaved widow became housekeeper to Mr. John Stevens, the licensee of the Greyhound Hotel, at Angaratta, and eventually put aside her weeds once more in order to become his wife. Mr. Stevens was not happy in his married life. He suspected Mrs. Stevens, and openly accused her of attempting to poison him with arsenic, and, after enjoying her society for a couple of years, he turned her out. Mrs. Stevens went to Sydney, and remained there until about eighteen months ago, when she returned and sued her husband for maintenance, and obtained an order against him for 10s per week. Since then she has lived in a small cottage on the outskirts of the town, where she has dwelt alone.

She has three surviving daughters, one of whom is married to a farmer named Petts, of Moyhu, some eighteen miles from Wangaratta, and another to Charles Plum, a son of the deceased, and who resides at Sprinchurst. The last-named alliance accounts somewhat for Mrs. Stevens’ familiarity with the affairs of the late Mr. Plum. Mrs. Stevens’ personal appearance bears unmistakable testimony to her Spanish extraction, but nevertheless her manner to strangers has always been quiet and exceedingly affable. She added to her income by nursing, and, it is hinted, by other less praiseworthy means, though until this last episode in her career she has never been in the hands of the law. Her movements, however, were continually regarded with suspicion.

She was looked upon by all who knew her as an extraordinary woman; and if the suspicions which now rest upon her are found to be well founded, that estimate is certainly correct, for a more deliberate and cold-blooded piece of villiany perpetrated by a woman it would be hard to find in the criminal records of any country.

FULL TEXT (Article 3 of 3): The trial of Harriet Ann Stevens, for the murder of John Plum, farmer, of Wangaratta, was concluded on Tuesday at Melbourne. The jury, after deliberating an hour and a half returned a verdict of not guilty, and the prisoner was discharged. The facts of the case were rather peculiar. The body of Plum was found in the remains of his house, which had been burnt down, suspicions of foul play prevailing. At a post-mortem made on the body, which was much charred, traces of poison were found in deceased’s stomach, and the medical evidence showed death from arsenical poisoning. Shortly after the death of Plum a quantity of money, principally a deposit receipt for the property of deceased, was found concealed in a woodheap in the back yard of Mrs. Stevens’ house, who was accordingly arrested on a charge of murder.

Mr. Hird – Husband #1, a publican, died (no mention of suspicion of murder)
Mr. Cootie (or “Coutie,” or “Doutie”) – Husband #2, seems to have been poisoned.
John Stevens – Husband #3, left her because he believed his wife was poisoning him.
John Plum, poisoned.