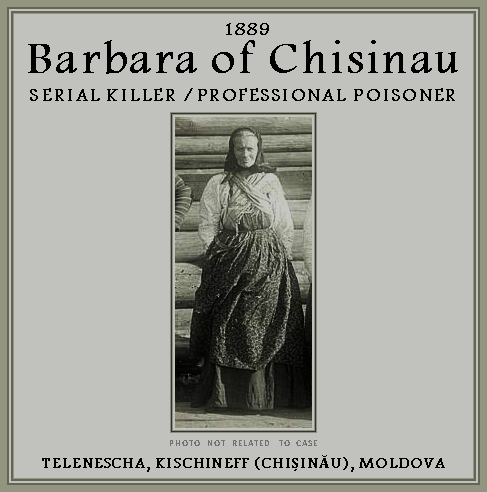 FULL TEXT: A horrible murder is reported from the village of Telenoseha, in the government of Kischineff, Russia. Some months ago. a young farm girl, named Katarina, married a young workman carpenter, Ivan Andreovitch. Katarina did not behave well, and Ivan, to keep her in order, used the domestic knout. Katarina determined to have him bewitched into less severity, and applied to the local witch, Barbara, to do the work. Barbara, in exchange for $4, gave her a pebble and bade her grind it into powder and give it to her husband with his food. Katarina made it into powder and put the most of it into a cake, which Ivan got for supper that night. In the night he was taken violently ill, and, after suffering for two days, died. The post-mortem established poisoning by arsenic. It came out that Barbara was a professional poisoner, who murdered for the pleasure of murdering. This old woman, whose appearances is described as revoltingly hideous, said to the judge at Kischineff assizes: "It's a great pity. I have only poisoned nine men, and I had made up my mind to do for ten." By her confession it came to light that she had poisoned her two husbands and six children.