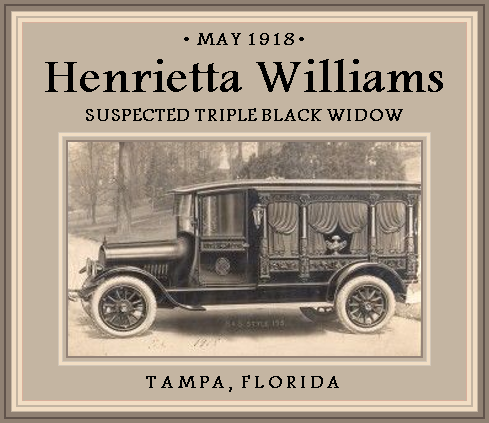 FULL TEXT: Henrietta Williams, colored, of No. 1013 Twenty-ninth street, was arrested Sunday night by Chief Deputy Sheriff A. C. Logan and is being at the county jail pending a murder investigation as a result of the mysterious death of Albert Harris, also colored, who was living with the woman. Chief Deputy Logan said yesterday that he believes the man was slowly poisoned and that the case is identical with the death of the woman’s first two husbands, within the past few years. Mr. Logan also said yesterday that he had received reports that this was the third man to enter the “great beyond,” starting the journey from the woman’s house, and that he believed he had a case that would end in a murder trial.

Dr. R. E. Glass has removed the dead man’s stomach, which has been sent to Tallahasse for analysis, and Justice of the Peace William Norona will hold a coroner’s inquest over the body Thursday afternoon. In the meantime Chief Deputy Logan is working on the case and expects to have some strong evidence to present at the hearing.

Harris was sick last week and Thursday had a doctor, who left some medicine. The man got no further attention before his death. The death certificate has not been signed, pending the examination of the man’s stomach to determine the cause.

FULL TEXT: No report has yet been received by the sheriff’s office from the state chemist with regard to the contents of the stomach of Albert Harris, colored, who died last week under suspicious circumstances at the home of Henrietta Williams, also colored, who is held in the county jail pending investigation. Her husband is alleged to have died several years ago under similar circumstances, slow poisoning being suspected. The woman frankly admits that neighbors gossiped and secretly accused her of having poisoned her husband, and she frequently gives way to spells of hysterical crying. However, she vehemently denies having in any way hastened the deaths of either her husband or Harris.

FULL TEXT: After being confined in the county jail for six months awaiting trial on a charge of murder, Henrietta Williams, a negress was turned loose yesterday when she appeared in court, Circuit Judge F. M. Robles dismissing the case when State Attorney H. C. Gordon announced a lack of evidence.

The woman was accused of administered ground glass in the food of Albert Harris, with whom she lived, but there was no one in court yesterday who could testify to the manner in which Harris died. An examination of the contents of his stomach showed some small particles that resembled ground glass but Dr. Glass said yesterday he could not swear that this substance caused the negro’s death.

Several other murder trials are scheduled for early in December in circuit court. 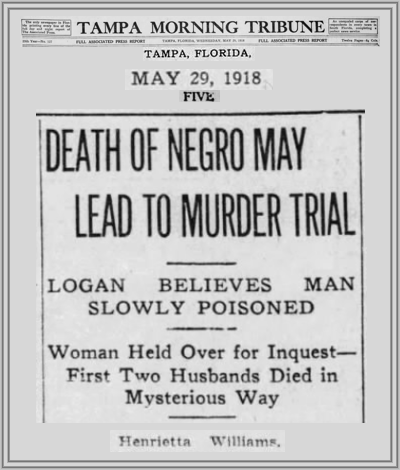