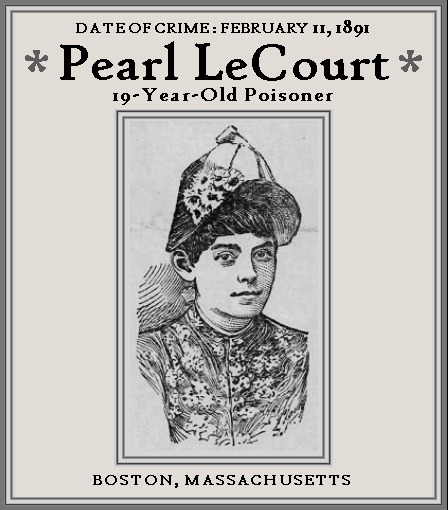 FULL TEXT: Miss Pearl Le Court was, yesterday, at the Chelsea Police Court. remanded to jail without bail, charged with attempted murder at Revere, on Feb. 11.

At the brief hearing she pleaded not guilty.

When seen by a GLOBE reporter. Miss Le Court insisted that she did not purchase the arsenic.

George Garrett denies the statement that he and Pearl are engaged to be married.

~ MRS. LE COURT DISCOURAGED. She Does Not See Anything Bright in the Future. ~

When a GLOBE reporter called at the Le Court homestead last evening he found the atmosphere of the household even more "Do you recommend it to women?" gloomy than usual.

Mrs. Le Court dragged herself wearily into the room and sank in an exhausted manner into a chair. When asked if she felt any better than she did in the morning she said "No, and I don't believe we ever shall advise women or anybody, for that matter any better here."

The woman's face looked just a little more haggard and worn if possible than at any of damp air from an open window, a ride in time during the family's trouble, and she appeared to have no ambition or hope.

Her face is of a strange, unnatural color, somewhat resembling that of the child as it lay dead in the little casket. While she suffers little actual pain, her system is growing gradually weaker and her flesh  becoming numb.

She appears to be waiting patiently and resignedly to learn her fate. In answer to doctor's wish that there would soon be a change for the better, she replied that she saw little prospect for it.

Mr. Le Court was worse last night. He seemed to be taken down again as he has been several times before. He was delirious, and wildly called out the names of his children, Pearl and Daisy, saying. "Don't let them lock her up.”

Dr. Weeks or Chelsea visits the patients daily. He said to a reporter last night that there is practically po improvement in either ease. With Mr. LeCourt there is in more paralysis at present than has been the case at any time previous.

The principal complaint of the wife, the doctor said, was numbness and weakness.

In a morning paper yesterday it was stated that Pearl had intimated that she was not really the daughter of Mr. and Mrs. LeCourt.

Mrs. LeCourt was asked about the matter last night, and she firmly declared that Pearl is the child of herself and her husband. Their only other living children, she said, were Daisy and the 4-year old girl who was in the room.

~ PEARL WAS ABDUCTED. She Made an Involuntary Trip from Hartford to Springfield. ~

HARTFORD, Conn.. Feb. 28. – An uncle of Pearl Lecourt, Ernest Lecourt, was sentenced some years ago to State prison for 15 years for an assault on a girl. After serving six years he escaped, and was never recaptured.

On the afternoon of Sept. 9. 1887, Pearl was crossing the park adjoining the Capitol grounds, when she was stopped by one George Wilson. 35 years old, and told she was wanted at the depot. She went with the man, who induced her to board the train, and she was taken to Springfield.

There she told the landlady of the matter, and, a police officer being notified. Wilson was arrested and brought back to this city, and afterward sentenced to three years and to pay a fine of $500. He died in prison, Feb. 1 last.

FULL TEXT: Boston, Oct. 15. – In the superior court Pearl I. LeCourt, who indicted in June on twelve counts charging her with attempting to poison her father and mother by mingling arsenic with their tea, pleaded guilty to the first count, charging an attempt on her father’s life. Her counsel and the district attorney agreed that the prisoner was not entirely of sound mind, but that it would be better that she should go to Sherborn reformatory than to an insane asylum. Accordingly Judge Bond sentenced her to five years’ imprisonment at Sherborn. 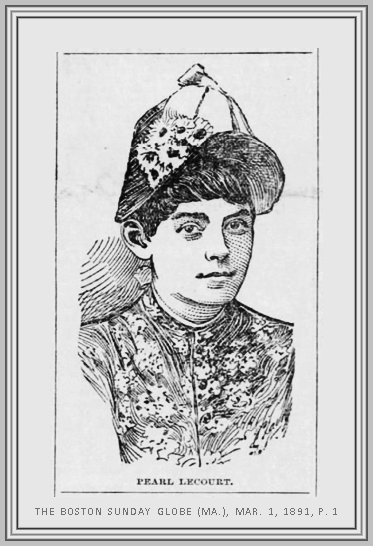