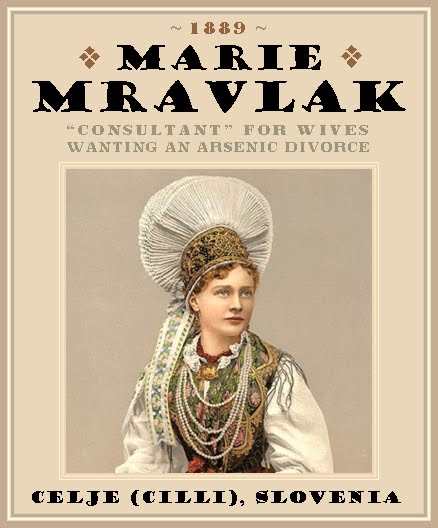 
FULL TEXT (Translated from German): About a horrible criminal process is reported from Cilli: On February 9, 1889 Schönstein died next to the real estate owner Nicolaus Latounik. Soon after his body was buried, it was rumored that his wife, Elizabeth, had poisoned him. The examination of the exhumed corpse confirms this, causing Elisabeth Latounik to immediately make a confession.

She did not know, she asserted, that the 70-year-old Marie Mrawlag who provided her with a “proven remedy” contained arsenic. Soon afterwards the rumors spread again, about the December 9, 1888 death of of landowner Anton Trobina telling that he had been poisoned by his wife Helena (who since then remarried Stessek) by arsenic. There was an exhumation and examination, whereby poisoning was confirmed.

Now Helena Stessek was arrested and confessed that she had been misled by Marie Mawglag; the poison had mixed by her into her first husband’s medicine. - Mawlag was also arrested, of course.

Although she denied having misled the two named women, she confessed to the examining magistrate that 20 years ago she had given her husband the liquid they called arsenic prescribed as a cure, after which he fell ill and died about three weeks later.

The corpse of this victim, however, could no longer be found, so that the subjective fact was not to be established.

The prosecution therefore made in this case, despite the confession, not the charge of assassination itself, but only on attempt this crime, while the other two women are under the charge of willful murder.

Marie Mrawlag is also accused of trying to hide the crimes of her two docile students.

After the defendants confessed their deeds and the testimonies were in full accord, the jury affirmed their guilt, after which the aged Mrawlag was given a sentence of 18 years of hard prison time.


FULL TEXT: Cilli, June 21st. – Under the presidency of the Hofrathes Heinricher in the presence of the L.-G.-R  Ballogh and Rathssckretärs of Wurmser as a judge, the main trial today took place against those women from the Schönstein area, who have made their men by arsenic from life. The profound moral depravity which appears among the defendants, the unbelievable brutality, and the cold-bloodedness with which they went to their work, made it plain that the clergy in the countryside did not fulfill their noble task, because they were more concerned with everything, as it is considered on the instruction of the population. The prosecutor was Dr. Nemanic, the defense led Dr. Glantschnigg and Dr. Hraschovec.

The accused are: Elise Zahovnik, 34 years old, Catholic, widowed; landowner in Ravne, Helene Stefek; widowed Trobina, 29 years old, married, resident of Velunagraben; and Maria Mravlak, 69 years old, widowed, chaste, in Pleschivec. The landowner Nikolaus Zahovnik in Ravne died on Feb. 9 after a short sickbed. Since he was living in disunity with his wife and the symptoms of the disease indicated poisoning, the autopsy and chemical examination of body parts was carried out. Arsenic use was confessed, and the medical examiners argued that Nikolaus Zahovnik had died of poisoning in arsenic. Elise Zahovnik immediately admitted that she gave her husband on January 30th. I entered arsenic with whey because it was treated raw and physically ill-treated.

She also alleged that she was tempted by Maria Mravlak, an old, nearly 70-year-old, chaste, who told her that she herself had poisoned her own husband with arsenic twenty years ago, and that in January she went about getting rid of another’s husband. But there was also another poisoning case that came to light. Anton Trobina, born in Velunagraben, died on December 9, 1886 after a short illness. Exhumation of the corpse was ordered and the chemical examination found in the corpse constituents arsenic. Helena Stefek, then wife of Trobina, has confessed, on advice of Mravlak and out of anger that she treated her husband badly, having fed him a knife-edge of arsenic with some medicine.

Maria Mravlak denied, but the information of Zahaonik and Stefek were also supported by Maria Baier, who advised Mravlak about 9 years ago to feed the spouse yellow arsenic and to cook the arsenic into tatters [dissolving it?], thereby the stomach does not redden and you could recognize nothing if you also exhume the corpse. Also Maria Grudnik complained about her husband's behavior to Maria Mravlak about 5 years ago and then she said: "Get your husband out of life, you have to get rid of such a man, mine also has to go crazy." Mravlak now tells that she gave her husband arsenic 20 years ago mixed into salad.

Since, because of the length of time, it is not known whether the man really died of arsenic poisoning alone, Maria Mravlak was only charged with attempting murder. The jury was asked eight questions. After half an hour of consultation, the chairman proclaimed the verdict, saying that Elise Zahovnik's assassination, Helena Stefek's attempted murder, and Maria Mravlak's attempted murder, inciting murderou and the attempted inciting of poison murder answering the charges were all declared in the affirmative. The verdict will be announced on Sunday.

FULL TEXT: Cilli, June 23. – At noon today the verdict was pronounced on the spouse murderers who were found guilty by the Geschivornen. Elisabeth Lahounik was sentenced to death by hanging, Maria Mravlak to life in prison, and Helena Stefek to a ten years in prison.

FULL TEXT (Translated from Hungarian): The court in Cilli has ruled over three poison-mixing women these days.

Farmer Lahounik’s 37-year-old wife suffered a lot from her husband and 29-year-old Mrs. Stefek couldn’t get along with her first husband, either.

As they once complained of their bitterness to the old “wise woman,” Mari Maravlak, she advised them to put the rough husbands underground, as she had done to herself.

Farmer Frobina died suddenly a few years ago and Lahounik two months later. The deaths were suspicious, the two dead were excavated, and it turned out to be victims of arsenic poisoning. The women testified that the “wise woman” was the instigator.

One was mixed with the milk, the other with the medicine, Mravlak Mari mixed it into the salad, they gave the poison to their husbands.

They tried to excuse themselves at the final trial, but the court sentenced Mrs. Lahounik to death, Mravlak Marit to life imprisonment, and Mrs. Stefek, the first husband's killer, to ten years in prison.

Celje (Cilli) is the third-largest town in Slovenia. It is a regional center of the traditional Slovenian region of Styria and the administrative seat of the City Municipality of Celje. The judicial district Schönstein ( Slovenian : Šoštanj ) was one of the district court Schönstein subject jurisdiction in the state of Styria . It included parts of the political district Windischgraz (Slovenji Gradec) and was in 1919 incoirporated into the new the state of Yugoslavia 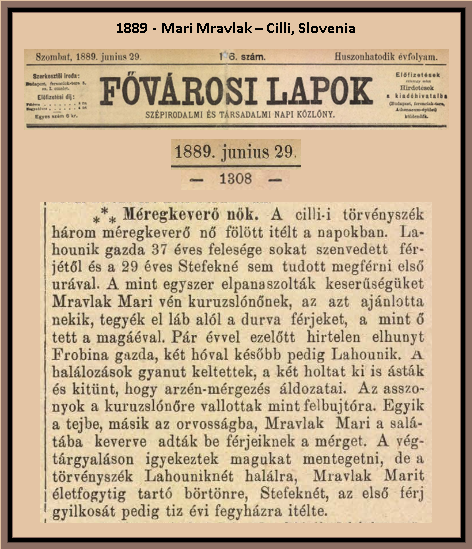 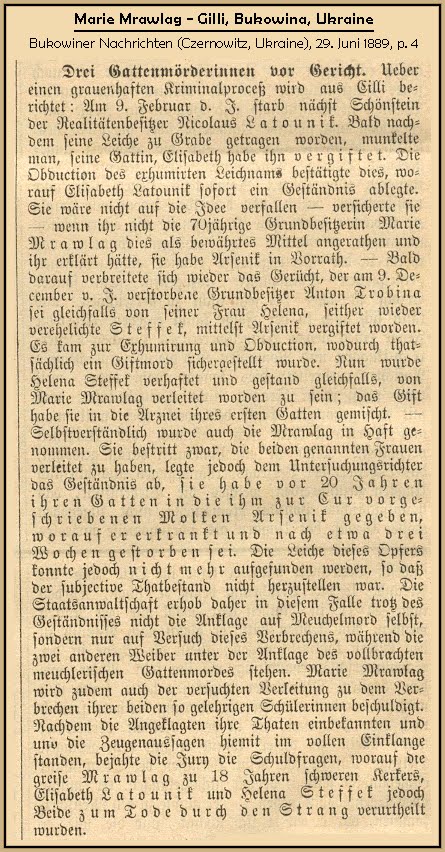