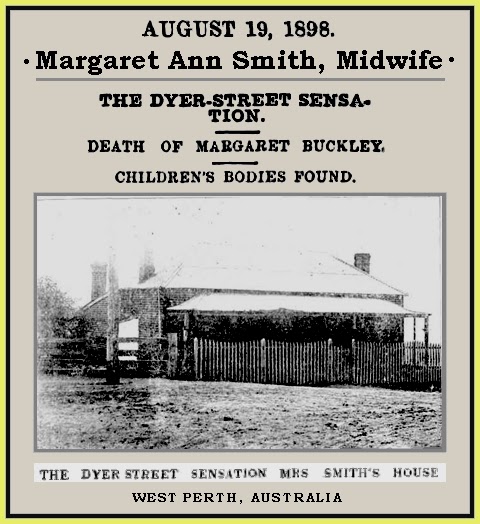 FULL TEXT: The discovery of the body of a newly born child in the yard attached to the premises of 32 Dwyer-street, West Perth, last week, was succeeded by further discoveries of a similar nature. Detectives Connell and Benfrey, assisted by Plain-clothes Constable Mann, continued the investigations. The result was the discovery of two more bodies of fully developed children, the post-mortem on one of which apparently shows that it had been born alive. The result of the post-mortem on the body first found was proved that the child had been prematurely born at a somewhat early period of gestation.

Mrs. Smith, who resides on the premises in Dyer-street, describes herself by a publicly displayed plate as a certificated nurse. The house where Mrs. Smith and her family reside -- which is the subject of one of our illustrations -- immediately faces the gates at the West Perth railway crossing, being on the northern side of the line. There is little about the house itself to distinguish  it from a thousand and one others of a  similar sort in Perth. The chief mark of difference from such premises is the size of  the yard, which is such as would be divided into three were the house of more modern construction, for it appears [to] be one of the longest built houses in the street an impression that is heightened by if juxtaposition to a quite modern terrace of  two-storied houses. Between Mrs. Smith’s house and this terrace is a passage some 10 ft. or 12 ft. wide, which affords entrance to the yard. Diagonally across this right-of-way the investigating police have excavated an irregular description off trench. The yard itself has been prospected with apparently no system, though probably the surface indications have been carefully noted by the detectives, with the  result that they have discovered the three bodies above referred to. The western end of the yard appears to have claimed the greatest amount of attention from the detective’s, for here, close against the high close-picketed fence, mounds of black, grey and yellow sand lie in thick confusion. Portions of the yard do not appear to have been dug up at all, and as no operations were being carried on by the diggers at the time of our reporter’s visit, it may be assumed that the detectives have satisfied themselves that nothing farther is to be gained by further delving.

The interior of the house would lead a  casual visitor to believe that the occupants are people of somewhat refined tastes. The house appeared to be comfortably furnished, and presented a general appearance that would suggest the possession of means by the inmates. Saturday was spent by those making investigations in Dyer-street in completely turning over an alley-way and portion, of Mrs. Smith’s yard to a depth of some three feet. Three detectives and three plain clothes constables delved till nightfall, apparently with no further result than the circulation of wild rumours in the neighhourhood. “The detectives have found 14 bodies,” one wildly excited individual stated. The lowest estimate of any find was “bones,” but whether they were human or not none appeared able to say.

All day on Saturday a constantly maintained number of the public hovered around the vicinity, for while some departed, others came to take their place. On Sunday operations were suspended.

The inquest on the bodies already found was opened at the Colonial Hospital on Saturday, in the presence of the Coroner (Dr. Lovegrove), and the jury that had been empanelled to deal with the inquiry into the death of Margaret Buckley. The formal proceedings over, the inquiry was adjourned until the same day and hour as . those when the inquiry concerning Margaret Buckley will be resumed. Although the same jury will be employed and the same hour is fixed, the enquiries will be quite separate from one another, that on the infants being dealt with at the conclusion of that in regard to the woman.

The three babies found in the yard in Dyer-street were, after the inspection of the jury, removed to the pauper portion of the cemetery and there buried.