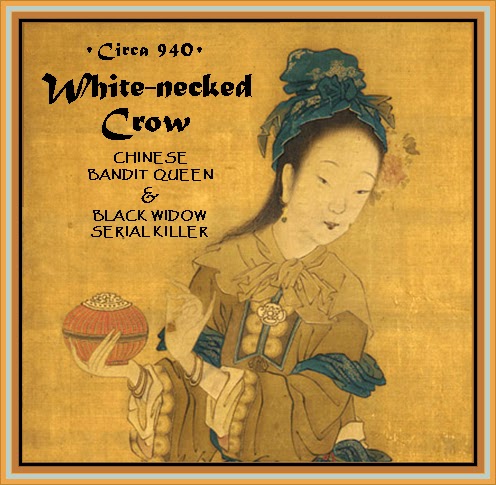 In Chen Zhou there was a woman bandit leader known as the White-necked Crow. She was some forty years of age, coarse and squat in physique, brown-haired and swarthy-limbed. She presented herself at the barbarian king’s court having taken over a man’s name, and her costume and ritual deportment were all those of a man.

The barbarian king summoned her before him and bestowed a brocade gown, a silver belt and a saddled horse. He appointed her General Mindful of Civilization and sent her out to obtain the surrender of all the bandits east of the mountains. Lavish grants were made.

Zhao Yanshou, the usurper Prince of Yan, summoned her for questioning. The woman gave this account of herself: she could shoot arrows to left or right at the gallop; she wore double bow-cases; she could travel two hundred li in one day; she was skilled in both spear- and sword-play; the several thousand men under her control were all subservient to her. When asked whether she had a husband she said that she had several dozen in the past, and when they gave the slightest dissatisfaction she knifed them with her own hand. Everyone who heard this cried in anger!

During the ten days she spent in the capital she went everywhere on horseback and had a man in attendance on her, also on horseback.

This was a human demon. Barbarians from the north bring chaos to China, a woman rules the roost – these are the products of excessive yin energy.

Later on the woman was killed by Fu Yanqing, military commissioner of Yan Zhou.

The White-necked Crow’s original base in Chen Zhou was 80 miles south of the capital. (It is now Huaiyang in modern Henan). She was interviewed by a man, Zhao Yanshow, who had ambitions to take the throne on behalf of the Khitan and had received from them the title Prince of Yan in 945. her eventual slayer Fu Yanqing was military commissioner of Yan zhou under the Later Han from 6 August 947 to 14 April 950.