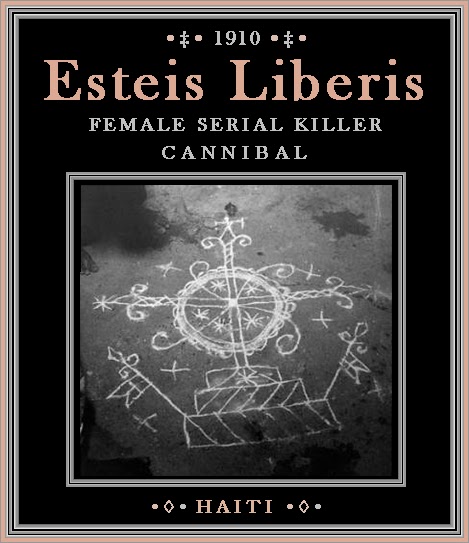 FULL TEXT: The “Cologne Gazette” gives details of a ghastly affair in Haiti, in the course of a lengthy report, dated from Barahona, July 18, according which a Haitian woman named Esteis Liberis, aged 24, has murdered and eaten five children. The woman in question is a member of the secret religious sect worshipping a god known as Voodoo, the Snake-God, and Inspector of Police de Cambronal has submitted to the authorities a full report of his investigations into the matter, from which, the “Gazette” quotes the following:—

In her house I found a barrel containing pickled human flesh, the remains of a child aged about 12. It is, unfortunately, well known that the Voodoo faith has still many adherents. In name, these natives are Christians, but in secret they remain devotees of their snake-god, and hold private meetings, at which he is worshipped. The priests of the cult are all-powerful, and the sacrifices are usually animals, but occasionally, as in the present instance, young children are immolated. The god himself takes the form of a snake, and his mouthpiece is a priest, who is assisted by a priestess.

Esteis Liberis, the young woman concerned in the present affair, was at the time high priestess of the cult. At the great ceremony in honour of the snake-god, the high priest and priestess sit on a double throne, the woman being clothed in nothing but a gorgeous girdle. Worshippers of both sexes attend with red cloths round their loins. On an altar stands a wooden box containing the snake, which is brought from its box and worshipped by all present, gifts being placed on the altar while the populace prays for the fulfilment of some great public desire. Then begins a wild dance, headed by the chief priestess, who discards her girdle as the dancing grows more furious, and a halt is not called until the people begin to fall exhausted to the ground, if any misfortune has befallen the people a sacrifice is offered to the god.

It was on one of these occasions that Esteis Liberis insisted on the sacrifice of a human victim and, in concert with, a man named Conzo Pelle, decided to kidnap a girl, a niece of Conzo. The child’s mother was enticed away, and on her return was informed that the chief priestess had called for her daughter. The mother seemed greatly honoured, and a special ceremony was immediately arranged. When all were assembled the girl was fetched from her hiding-place, laid in front of the altar, and strangled by her uncle. Her head was cut off, and all those present drank some of the blood, which was collected in a bowl. The flesh was subsequently cooked at Conzo’s house, and instead of being eaten, as had formerly been customary, was preserved. Two girls who had overlooked the cooking of the flesh were declared to have offended the god, and these, too, were then similarly sacrificed, their deaths being followed by two more a few days later.

Such is the story as given by the police inspector. It would appear that the woman Liberis, who is stated to be now in prison in the capital awaiting trial, was directly responsible for the killing and eating of five children. History does not carry the matter further back, though doubtless researches will now be made with a view to discovering how long these human sacrifices have been going on. —”Central News.”

FULL TEXT (translated from French): "Gazette of Cologne" has published a report of the police inspector, M. from Cambronal, with horrible details about human sacrifices that took place in the island of Haiti.

The inspector of Cambronal, investigating the case, carried out a search of the house of the young woman and found a small barrel containing human flesh. They were the remains of a twelve-year-old child who had been slaughtered in one of the religious ceremonies of Vandu, where the faithful, nightly gathered in a forest, offered sacrifices to the mysterious God Serpent. Esteis Liberis was there as High Priestess and she was assisted by a man named Couzo Pelle. It is the niece of the latter who was sacrificed.

The child’s mother was taken away under a pretext, and the girl was seized, who was tied and slaughtered by her wave.

The Liberis woman and her accomplice have been arrested 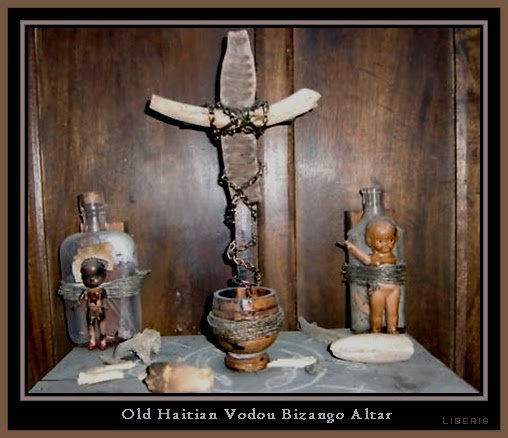 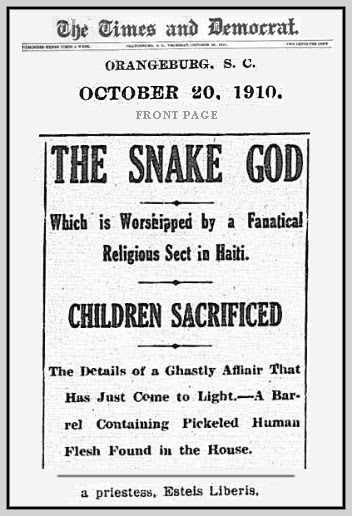 From a 1905 article on Voodoo child sacrifices. 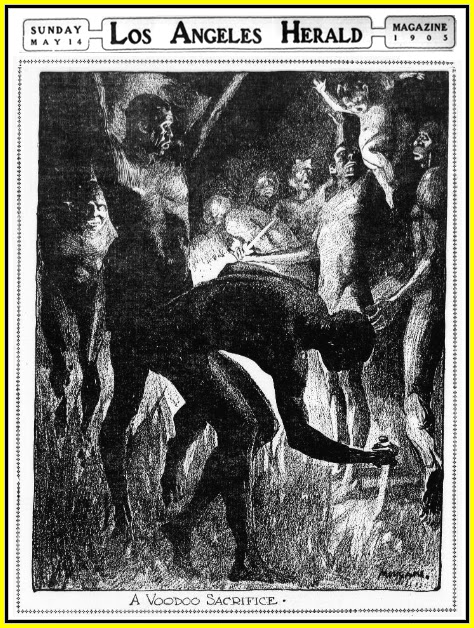 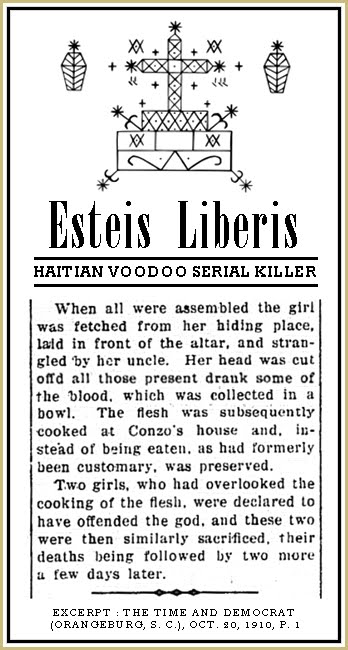