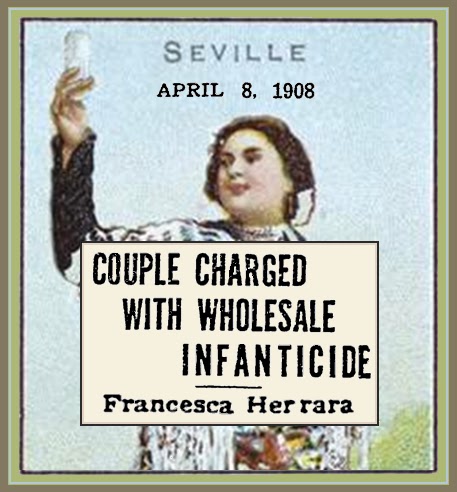 FULL TEXT: Seville, Spain, April 8. – Suspected of murdering 18 of their own children, the anarchist Molina, and Francesca Herrara, with whom he has lived for 29 years, have been arrested here on a charge of wholesale infanticide.

A mob made a desperate attempt to lynch the couple when they were arrested, and the police saved their lives with the greatest difficulty.

The arrest followed the discovery of fragments of the skeletons of several infants in the house Molina and the woman occupied. A search revealed a small cemetery in the cellar and other graves were found in the garden adjoining. The police think some of the children were even buried alive.

The couple have had 22 children in the 29 years of their residence together, and it is thought only four of them survive.