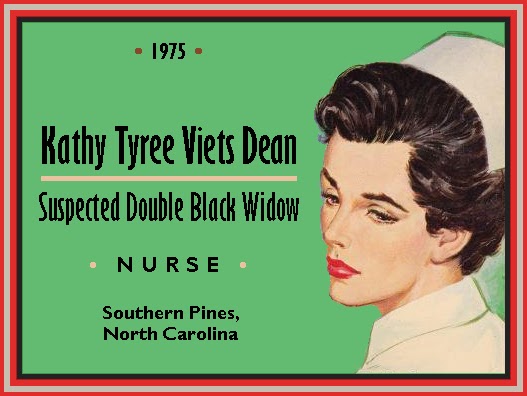 Results of an autopsy last week revealed William West Viets, who died on May 15, 1973, died of arsenic poisoning.

Viets’ widow. Kathy Tyree Viets Dean, 24, is now married to Robert Wrenn Dean, 30, who is being treated for arsenic poisoning at the Durham V. A. Hospital.

Hudson and Dean was married in the early part of the summer and became mysteriously ill in August. He was transferred from Moore Memorial Hospital to N. C. Memorial Hospital in Chapel, where his illness was finally diagnosed as arsenic poisoning.

Hudson said he investigated the circumstances of Viets’ death and discovered he had symptoms of arsenic poisoning before he died.

Mrs. Dean is a nursing student in Moore County where she lives with her second husband in Southern Pines.

FULL TEXT (Articles 2 of 2): No arrests or charges have been made in the homicide investigation of Bill Viets, who died here in 1973 of arsenic poisoning.

Columbus County police officials say, however, there is more than one suspect under consideration.

Neither SBI agents of law enforcement offices would reveal the names of the suspects stating that all evidence has not been gathered and no changes can be made.

The investigation began after Robert Dean, 30, the husband of Viets’ widow, Kathy Tyree Viets Dean, 24, was diagnosed as having been poisoned by arsenic.

Dean, of Southern Pines, is recovering in a Durham hospital where it was reported he is walking for the first time in a month.

Dean’s doctor is refusing to allows reporters to talk to Dean saying the publicity on the case has not been beneficial to his patient’s recovery. He added Dean had read about the controversy around the case in the newspapers.

Mrs. Dean is with her parents, Mr. and Mrs. Bryce Tyree, in their Whiteville home. Last week, she was reported to have visited her husband in the Durham hospital.

Harold Elliott, head of the investigation has been broken down into two parts.

“The investigation is still in progress,” Elliott said. “I really can’t say anymore.”