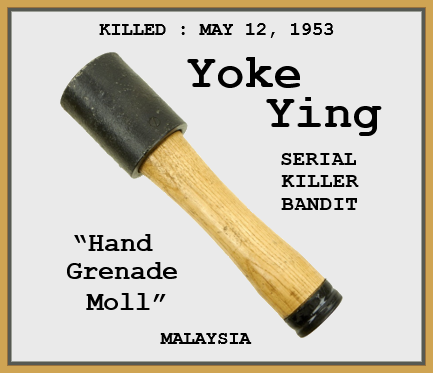 FULL TEXT: Singapore, Thursday. – Gurkhas on Tuesday killed “Hand Grenade Moll” a notorious woman terrorist in the Ben tong area of Pahang. She was one of five terrorists killed in Pahang on Tuesday. “Hand Grenade Moll,” whose real name was Tmoke Ying [or, Yoke Ying], was a branch committee member in the Communist terrorist organisation. A communique said yesterday: “Because she was associated with several terrorist murders in the area and wielded considerable influence among the local population her death has been hailed with relief and is likely to result in a considerable boost to local morale.”