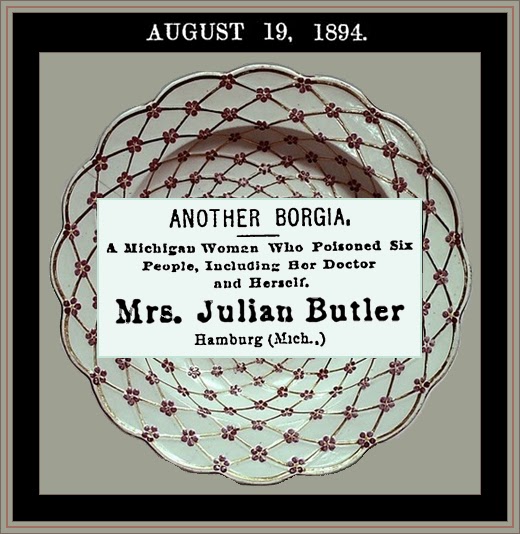 FULL TEXT: Detroit, Mich. Aug. 18. – The Journal prints a Hamburg (Mich.) special to-day alleging that Mrs. Julian Butler, 45 years of age, who resided near that village, is supposed to have poisoned her father, mother, husband and herself, all of whom are dead; Harry Whitlock, the hired man, who is dying, and Dr. Elias Smith, of Whitmore Lake, the family physician. Dr. Smith is broken in health, and attributes his illness to partaking of food at the woman’s home.

Mrs. Butler’s father was a steady farmer. Although he had heart trouble, he died from cramps after several months’ illness, during which times his hands and feet became numb and useless. The mother’s death was attributed to cramps, and was unexpected. Two and a-half years ago the woman’s husband, Charles Butler, was taken ill, and during the visits of the physician he was invited to dine.

Dr. Smith says he was invariably ill after the meals, but suspected nothing more than the effects of a congestion of food. About July 1, Harry Whitlock, who had taken the farm on shares, boarding at Mrs. Butler’s home, was taken ill. Dr. Smith treated him, ascribing his illness to milk poison or tyrotoxicon.

The physician tasted the food prepared by Mrs. Butler and was taken violently ill, the symptoms being burning at the stomach and vomiting. Dr. Smith carried with him some of the food prepared, telling the woman she was suspected of having poisoned the man. The food was sent to Ann Arbor, where a chemical analysis showed the presence of strychnine and arsenic. Meantime Mrs. Butler attempted suicide by taking laudanum, and, failing in her purpose, another poison was brought into play, which concluded the job. Just before her demise the woman practically admitted her guilt to Dr. Smith. Whitlock is living, but his hands and feet are useless and his health is broken.

The woman was a neighbor of Ex-Governor Winans, who died of heart failure some weeks ago. It was charged that Mrs. Butler had not sent him food and that his death was directly attributable to her. Dr. Smith denies this, however.