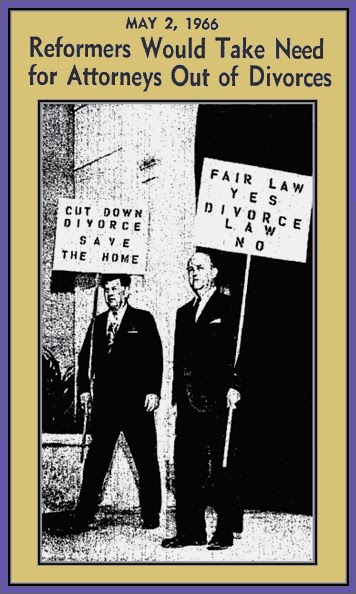 FULL TEXT: Pasadena – A nation-wide movement to reform divorce laws gained impetus over the weekend with picketing at the Pasadena and Pomona Superior courts.

Pickets from American Marriage and Divorce Reform and U. S. Divorce Reform, Inc., demonstrated in two cities and throughout California while representatives of similar organizations protested in 20 other states.

Paul D. Mitchell of Eagle Rock, a member of the USDR, and Lee Blincoe of Chatsworth, a national director of AMDR, carried signs here critical of divorce practices.

Chief target of the groups is attorneys, Blincoe said. He charged that the lawyers’ fees are greater when divorce cases go to court.

He urged that marital problems be handled through a family relations counselor, with the parties required to cooperate for a certain period of time.

“If this fails then the divorce proceedings should be carried out similar to a small claims matter in which the issue is settled with  the judge and the principals taking part, without attorneys,” Blincoe said.

“And in all divorce matters,” he continued, “the welfare of the children should be given first consideration.”

The organizations urge also that an hour-a-week course in creating a happy marriage should be required in grades seven through twelve.

Blincoe denied a frequent charge of a “sour grapes” attitude toward marriage by members of the organizations. While many have been through divorces, it is far behind them and few if any would gain from changes in divorce laws, he declared.