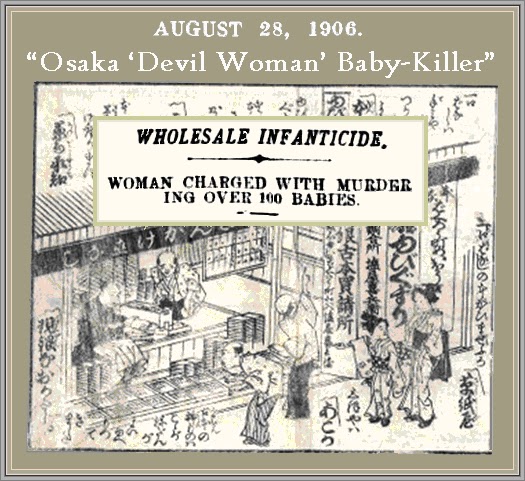 NOTE:  This case seems to be of the "baby farmer variety."

FULL TEXT: Advices from Rangoon dated August 2, report the arrest of a woman charged with having murdered over 100 babies in Osaka [Japan]. On the way to the Public Prosecutor’s office, from the Police Station, she was greeted by large crowds, with shouts of “human devil,” “kill the devilish woman,” and similar execrations. An indication of the strong feelings aroused by the fiendish crimes was given at the funeral of five of the children whose bodies had been recovered. The elder sister of the accused woman ventured to appear as a mourner, with the result that she narrowly escaped being lynched at the hands of the infuriated people. She was greeted with fierce shouts and jeers, and assailed with showers of stones, sustaining wounds on her head and face before she could escape.