Murder Husband, Go to Jail, But Still Get to Collect on Life Insurance: Ruth Plumlee’s Racket – 1925 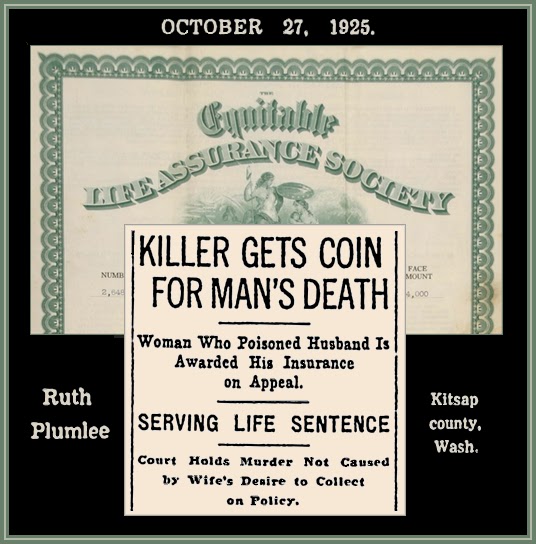 NOTE: Even the few articles presented here do not tell the full story, they do nevertheless tell a tale of a scheming lethal leopardess who never ever changed her spots..

FULL TEXT (Article 1 of 3): San Francisco, Oct. 26. – An insurance company is not absolved from liability because a beneficiary murders the insured, the United States circuit court of appeals held today in reversing and remanding for retrial a case in which the Seattle district court directed a verdict in favor of the Equitable Life Assurance society of the United States in a recovery suit prosecuted by G. C. Hewitt, on March 29, 1922, five hours after she had paid the premiums on two life insurance policies held by her husband and naming her as beneficiary. Mrs. Plumlee later pleaded guilty to poisoning her husband and was sentenced to life imprisonment.

The circuit court held that the lower court erred in directing a verdict in favor of the insurance company, on the ground that “receipt, delivery and acceptance” of the policies was not the act of the insured, but of the beneficiary. The circuit court further pointed out that the evidence indicated that the killing of Plumlee was inspired by domestic troubles and not by a desire of Mrs. Plumlee to collect insurance money. Testimony showed that Plumlee had threatened to sue for divorce and that Mrs. Plumlee learned of this between the time she paid the premiums and the poisoning of Plumlee.

Convicted of poisoning her husband in Kitsap county, Wash., she originally was imprisoned on May 2, 1922, on a charge of first degree murder. She was accused of paying up the premiums on her husband’s insurance policy without his knowledge, then poisoning his food.

The board of prison terms and paroled has paroled her to a Seattle nursing home, which they felt “would meet her needs.”

Mrs. Plumlee was paroled in 1951 but was returned to prison in 1953 because she was unable to cope with the pressures of the outside world, board officials said.

The board said she has become extremely religious during her years in prison and has been refused parole consideration many times.

“This has been my home for years,” she was quoted as saying about the prison, “and in a way I would like to die here.”

FULL TEXT (Article 3 of 3): Seattle – A charge of arson was filed yesterday against Ruth Plumlee, 66, paroled from the State Penitentiary late last year after serving 38 years for murder.

The charge accuses her of setting a fire last Saturday in a Seattle nursing home where she lived. The woman who operates the home said she found a carton of papers burning in an exit.

Mrs. Plumlee was sent to prison for poisoning her husband in Kitsap County in 1922.