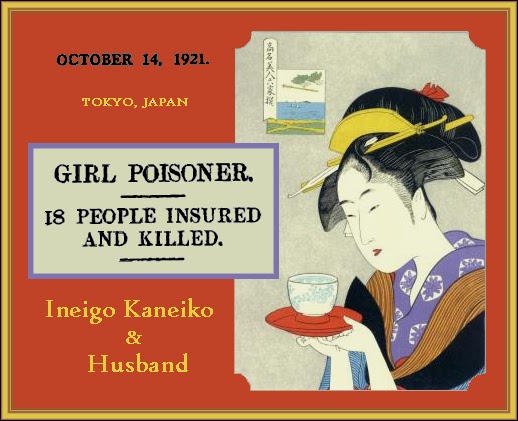 Note: There are two different spellings of the name "Kaneiko" and "Kaneko") in the articles below.

FULL TEXT (Article 1 of 2): Tokio, Nov. 19. – The authorities claim to have proof that Ineigo Kaneiko, the 18-year-old-girl accused of poisoning her sister, insured eighteen of her relatives and then murdered them all to collect the insurance.

FULL TEXT (Article 2 of 2): Tokio, Japan – A young Japanese woman named Kaneko is being tried here on a charge of poisoning 18 people whose lives she had insured in her favour.

Good-looking and well-educated, she cleverly tricked both doctors and insurance companies. First she murdered her sister, with whose husband she had fallen in love. Kaneko asked him to meet her at a Geisha house, where he told her that he had grown tired of his wife. Kaneko suggested that she should poison his wife after insuring her life for ₤1,000.

The crime was carefully carried out, and after the insurance had been paid the couple married and went to live at Kumakura, a seaside resort, where they rented an imposing villa and planned to poison other people.

They advertised for a secretary to “the managing director of a large firm,” and received numerous replies. Each applicant was tricked into signing an insurance policy, after which Kaneko invited them to dine with her. She murdered each guest, according to the evidence in the court, by administering poison in a glass of Japanese wine.

During the trial she maintained an attitude of stolid indifference. Her husband confessed after a severe cross-examination, during which the woman shouted, “They are like all men – an arrant coward!” 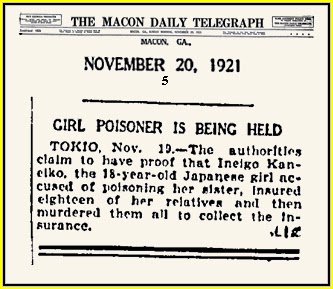 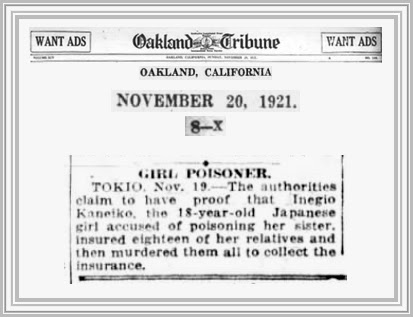 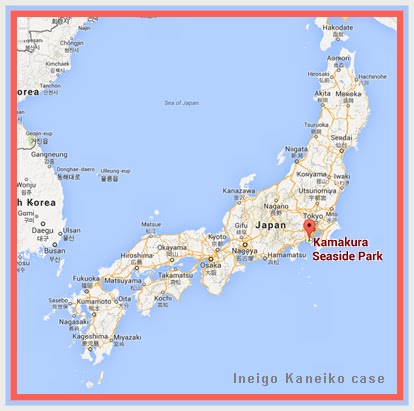