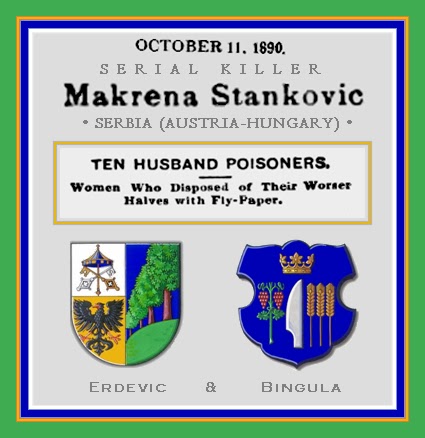 All the prisoners are peasants and belong to the Greek orthodox religion. They are all accused of murder, excepting Simon Sremcic and Milieu Placsio. The judicial expert, a chemist from Agram, declared that the traces of arsenic in the human body would be perceptible in the hair and beard long after complete decomposition of the intestines, his testimony was borne out by the condition of several bodies exhumed in connection with the Mitrovitz trial. The deaths occurred in 1880, 1883, 1884, 1884, 1885, 1886 and 1888, yet distinct traces of arsenic were found. In each case it had been obtained from fly papers. Each sheet contained forty-five centigrammes of the poisonous drug, whereas ten to fifteen centigrammes are enough to cause the death of a strong man—therefore one paper would suffice to kill three to four people. According to partial confessions made by some of the accused, their victims did not all suffer the same length of time.

In certain instances death followed rapidly, while in others it came on gradually. Eva Sarac, who died in prison last October, was the instigator of these various crimes. She was a kind of village witch, who prepared love draughts for the girls of the locality as well as poison for the men. Fly-papers were often fetched for her from Neusatz by the woman Plavszic, and before her death she confessed to having supplied Stankovic and Nestorov with arsenic to poison their husbands. Makrena Stankovic, the leading personage in this terrible drama, was undoubtedly a pupil of Sarac. She lived with her niece, whom she robbed of 100 florins. The latter threatened to prosecute her, but was taken suddenly ill and died. 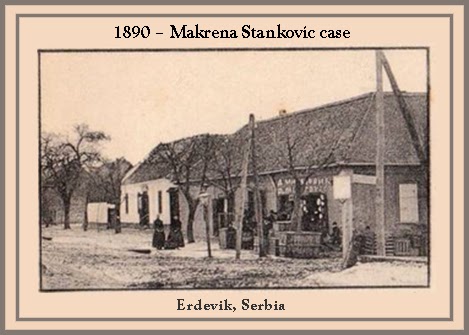 A wholesale example will now be placed upon record, a peculiarly atrocious one, the scene being a village in Austro- Hungary, near Mitrowitz.

Here, in the year 1890, a number of women of the peasant class – some twelve or thirteen in all – conspired together to poison their husbands. The plan they adopted was as follows: – At christening parties in their part of the country it is customary for little cakes, made of flour and honey, flavoured with various strong essences, and coloured yellow with saffron, to be eaten. These nativity cakes, as they are called, are not prepared by the person who is giving the party, but are sent as presents by all the friends and relatives of the family for miles around.

Taking advantage of these two circumstances, the plotters arranged that whenever a christening was about to take place at any one of their respective homes one of the others was to post them from some neighbouring town a parcel of poisoned nativity cokes. Yellow orpiment, a preparation of arsenic, was the poison decided upon for the purpose, it being argued that its colour harmonised well with the saffron which, as has already been explained, was one of the usual ingredients, while its bitter taste would be effectually disguised by the strong flavouring essences.

It would be difficult to find, in the annals of human crime and wickedness, a more horrible plot than was this one. Think of it! An occasion sacred to the celebration of the advent into the world, or, rather, reception into the Church of its forefathers, of a new-born babe, was to be utilised in order to hurry out of the world one of the authors of its being; and this, too, in a most cruel and callous manner, since death from poisoning by arsenic is one of the most agonising it is possible to conceive of. Further, as a crowning touch of horror, the hideous crime was to be perpetrated with the connivance, if not the active participation, of the baby’s mother, the victim, of course, being her own husband, and the father of her innocent child.

The diabolical plan worked smoothly enough in four instances. The doomed man in each case ate of the poisoned cakes, and died soon afterwards in torment. In the confusion that ensued upon his sudden illness the plotters made away with the of the doctored cakes, so that when the others come to be analysed nothing deleterious was found in them. It seemed, indeed, as if the number of deaths amongst the remaining husbands was only to he limited, as to time and so forth, by the number of babies born to their respective wives.

Fortunately, however, the fifth husband had his suspicions aroused when his him came, and refused the proffered cakes. This upset, of course, the plans of the coterie of murderesses. Not only that! They became alarmed and one of them tried to regain possession by force of two of the poisoned cakes, which the man had pocketed with a view to having them analysed. Something like a free fight ensued. The police were called in, and, by and by, inquiries revealed the whole hideous plot. Two or three of the women implicated committed suicide, but ten were arrested and put upon their trial. Of these four were sentenced to death, four to penal servitude for life, while the remaining two were, for some not very apparent reason, acquitted. 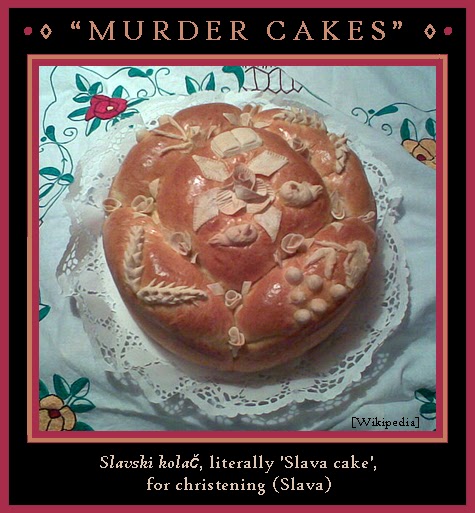 FULL TEXT (translated from German): In Mitrovic in Croatia began on the 25th of this month in front of the local king’s tribunal the trial of the poisoners of Symien has ended.

Ten wives disposed of their husbands in order to be able to lead an unrestrained life, either by by poisoning them or by seeking assistance from the local poisoner.

All the defendants are of Greek Orthodox religion and belong to the peasantry. The charge for all is the crime of assassination, all punishable under § 136 with death, with Simon Sremcsis and Milicia Plavsics with hard prison time of 10 - 20 years. The poisoning, which was diagnosed in the corpses of deceased victims, was accomplished with commercially available flypaper.

With a sheet of flypaper 3 to 4 adults could be killed. By some confessions of the defendants it may be proved that the poisoned husbands were before their death ill for some time, sometimes longer times, and that the symptoms of the disease were the same as those that physicians Dr. Josef Schulz and Dr. Stefan Paics have presented as symptoms of arsenic intoxication.

The opinion of the Chemical Institute in Agrem and the aforementioned physicians agree that all the victims of the crime have been poisoned by arsenic.

Sarac can be described As the original author of all these poison murders and possibly many unknown others. She died on 24 October 1889 during the course of the investigation.

Eva Sarac was known as a sort of village doctor, which knew to prepare love potions and always proved to be a helpful friend when it came to hush the consequences of a misstep in the beautiful village.

The Sarac was undoubtedly the teacher of Makrena Stankovics, the protagonist in the social drama that will take place before the Tribunal.

With her husband Makrena Stankovics lived in constant strife and it was well known that she led a lascivious life and maintained an intimate relationship with Stefan Kolarovics.

One neighbors who dislikes her say she boasted that she possessed a paper with which one could blow out the light of life for every human being. 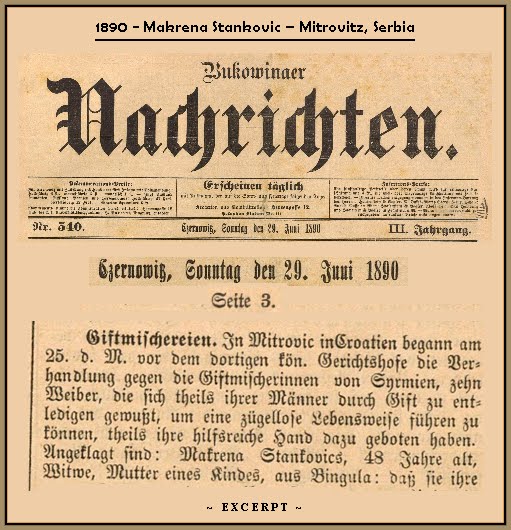 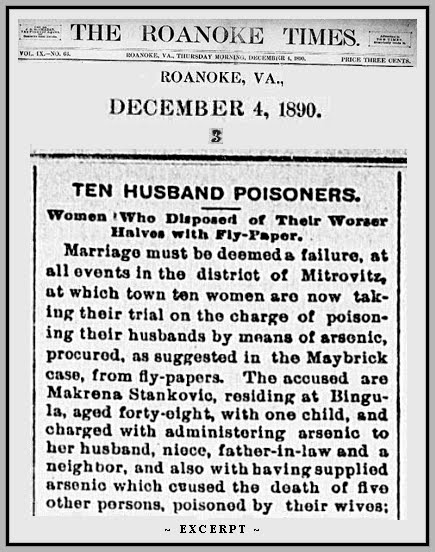