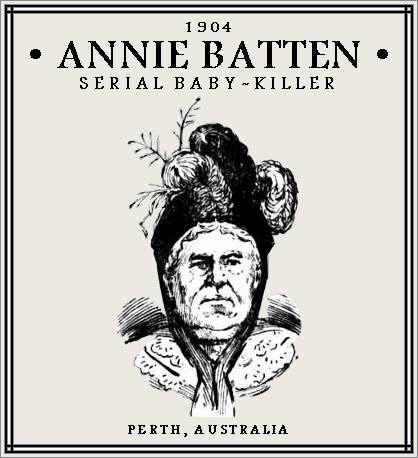 FULL TEXT: The charge against Annie Battin (70), the much advertised “Madam B.,” of having caused the death of Ethel May Peary, at Sydney, on October 21, 1902, was proceeded with at the Central Police Court, on Thursday afternoon, before Mr. Smithers, S. M. Mr. D’Arcy Irving appeared to prosecute on behalf of the Crown, and Mr. Levien defended. Sent for- constable Allen, of Redfern, deposed to certain communications made to him at the Redfern Police Station on Sunday, 6th inst., by a young girl tuned Essie, who had run away from Mrs. Battin’s place, and came to the station for protection. He reduced her treatment to writing. In consequence of the revelations made by the girl.

He visited Mrs. Battin’s house in Regent-street to make certain inquiries. He asked the old lady if she knew a girl called Essie, and she replied, “Yes, I am in great trouble about her. She won’t away on Friday last, and I have not seen her since.” Subsequently Sub-inspector Roche, Constable Spring and witness visited Mrs. Battin’s house, and made a search. Some instruments und medicine were found. They took Mrs. Battin to the Redfern Police Station. I and confronted her with the girl Essie I and a Mrs. Waters. The girl repeated her statement to the effect that May Peary was operated upon by Mrs. Battin in October, 1902, and after the operation was driven away to some other place. Three or four days later a woman came to the house crying, and said that May Peary was dead.

After the woman left, Mrs. Battin told Essie she had Riven her £1 not to say anything. After the inquest a man came to accused and said she would have to give him something on, account of the way she had treated May Peary, and Mrs. Battin promised to give him £5.

After hearing the girl’s statement, Mrs. Battin said to her: ‘1 have often slapped you in the face when you did not be have yourself, but now I wish I had beaten you to death.’ Witness was cross examined at considerable length on his method by which the statement was obtained from the girl.

Dr. Sidney Jamieson gave evidence that his post mortem on the body of May Peary disclosed the fact that she had died from septic peritonitis, following an abortion.

The case was then adjourned till Tuesday afternoon.

FULL TEXT: Sydney, March 23. – In the Central Police Court to-day the case in which Annie Batten (70), a widow was charged with having caused the death of Ethel May Perry on October 21, 1902, was continued.

Essie Batten said that she had lived with Mrs. Batten at 49 Regent-street, Sydney, as long as she could remember. She had seen many women going to that address.

Counsel: What were your duties? – She made me burn babies.

How many? – I could not say exactly.

Did she treat you well? – No she used to beat me.

Continuing, witness said women who went to the house were sick. Mrs. Batten would operate on them and witness used to buy certain instruments for Mrs. Batten. Occasionally, by arrangement, a woman stayed at the house.

Counsel: Do you recognise this photograph (deceased’s photo)? – Yes: she was at our place, and was operated upon by Mrs. Batten.

Did you have anything to do with it? –

Re-examined: Mrs. Batten gave her an instrument to wash after Miss Marsh had been at the house. Henry G. Cohen in the employ of Elliott Bros., stated that he recognised the girl Essie Batten. He had sold certain articles to her. She generally bought a dozen at a time, and had been purchasing the goods for about eight months.

At this stage the case was adjourned to to-morrow.


FULL TEXT: The hearing of the charge against the much-advertised ‘Madame B.,’ otherwise
Annie Batten, who is charged with having caused the death of Ethel May Pery by means of an illegal operation on October 21, 1902, was further proceeded with at the Central Police Court last
Tuesday, before Mr. Smithers. S. M.

Dr. Charles Maclaurin said that he was called in to see the woman Ethel May Pery on October 21, 1902. She was then seriously ill with scepticaemia. Her pulse was 160. He advised her removal to the Sydney Hospital. She was admitted there, and handed over to Dr. Coombes. When removed, she was under the influence of liquor, which had been administered to her by Nurse Imrie. Her illness was consequent on a miscarriage having taken place.

The scepticaemia was five or six days old.

To Mr. Abigail: The treatment at Nurse Imrie’s was all right as far as it went, but it was not enough. It would be absurd to say that she had been walking about 24 hours before I saw her. I believe that woman should be confined at 5 a. m. and remain all day in account of justice; and then give evidence; but bearing a child is a very simple thing compared to blood poisoning. The woman Pery was very thirsty, as women with septicaemia always are, and Nurse Imrie was administering whisky and soda to her. I should not have prescribed whisky and soda for her.

George Clissold, a farmer, of Cobbity, sold that he was a connection of the deceased woman by marriage. She was a married woman, whose husband had gene to Western Australia. He did not know whether deceased was pregnant or not.

Christina Waters said that she had worked for accused last October as a general servant. She saw a good many women go to the house in the evening. She washed the bedclothes, and twice noticed them stained with blood, and she afterwards refused to wash such clothes. Essie afterwards washed them.

After detectives had visited witness about the case she saw accused, who said, ‘‘I’ll give you £3 if you’ll try to make this case light for me.”

Elizabeth Imrie, a certificated nurse, of 13 Olive-street, Paddington, said that she took in Ethel Pery, or Marsh, the name by which witness then knew her, and put her to bed. She got worse in the night, and had a miscarriage. Witness sent for Dr. Maclaurin, and he and witness took her to the hospital. After Mrs. Pery’s death witness saw Mrs. Batten, whom she knew as “Mrs. B.,” and told her what had occurred. Mrs. Batten replied, “I don’t know nothing about the girl.” Witness told accused that she (witness) was to attend the Coroner’s Court. Accused replied, “It’s your affair, not mine. Get away,” She was very much annoyed.’’ Witness did not make that statement at the Coroner’s inquest; she did not mention Mrs. Batten.

At this stage the ease was postponed, but resumed again on Wednesday afternoon.

Essie Batten said that she was 14 years of age, end was supposed to have been adopted by accused, who used to treat her cruelly. Witness had been living with accused at 49 Regent-street, as long as she could remember. She had seen women visit the house, Mrs. Batten used to operate on them, and witness used to buy catheters, a dozen at a time, for accused from Elliott Brothers. Some of the women would write, and others personally make appointments with accused. They would stay a day or two. Accused used to give witness the babies to burn.

Witness could not tell, exactly how many. There was blood on bedclothes that witness washed. The photo (produced) was of a girl that visited the house about two months before Christmas, 1902. She was operated upon then went to a nurse’s at Darlinghurst. Accused said she would give nurse Imrie. £1 to keep her there. Afterwards, Nurse Imrie visited accused’s house, and Mrs. Batten said she would give Nurse Imrie £1 to keep-quiet. When Nurse Imrie arrived, she was crying, and said that the girl was dead. Mrs. Batten said to her, “I’ll give you £1, and that’s all I can give you.”

To Mr. Levan: Mrs. Batten used a long instrument on the women. Sometimes she told me that the girls were going to have babies.

She told me that the girl (Mrs. Pery) was going to have a baby at Nurse Irmie’s. Witness once saw an operation on a woman at Regent-street about eight months ago. Mrs. Batten said that an operation had been performed on the girl Pery. Witness did not see the operation Mrs. Batten was in Riley street or Devonshire-street when Mrs. Pery first visited her. It was in 1901. A tall, dark man took deceased to Mrs. Batten’s. His hair was dark, but his moustache was between dark and brown.

Mr. Clissold resembled him. Mrs. Pery was known as Miss Marsh in the house. On her second visit she stayed about a quarter of an hour. Witness remembered her going upstairs to put violet powder on her face because it was very red. When she left she said, “Good-bye.” She never, told witness her right name. The first time deceased visited Mrs. Batten she remained in the house three or four days.

To Mr. Mant: Mrs. Batten gave her black, instrument to wash after Miss Pery. It was about six inches long and, two or three inches round or in diameter. It had white stuff on it.

(Witness here rolled up a piece of paper to show the size of the instrument, it was very thick, and appeared to be about two or three inches in diameter.)

Henry Goldsborough Cohen, in charge of the surgical instrument department at Elliott Brothers, said that he had sold the previous witness elastic gum catheters. To his knowledge she had been buy in them for about eight, months. He sold her No. 7 catheter, which was much finer than a lead pencil. He had never supplied her with speculums?

(A note was here made on the depositions that the Crown did not call Dr. Coombes at that stage, because of the expense of bringing him from the country.)

The further hearing of the case was postponed until Thursday at 2.30 p.m.

Some slight formal evidence having been given, on Thursday, for the prosecution, his Worship committed the accused to take her trial at the Central Criminal, Court, Darlinghurst. 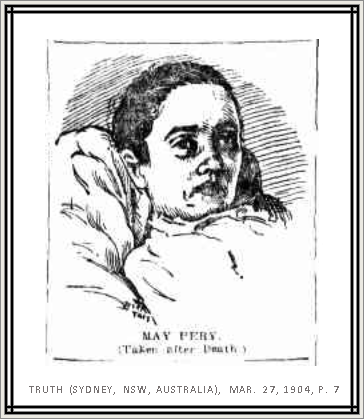 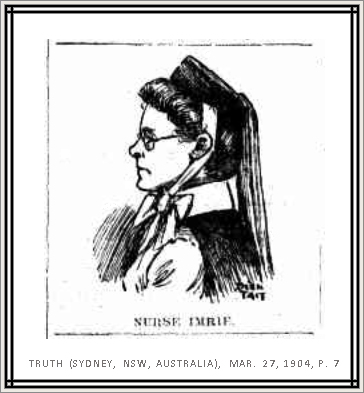 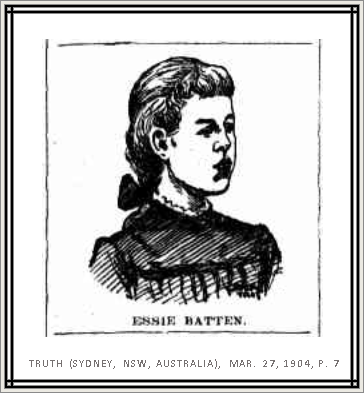 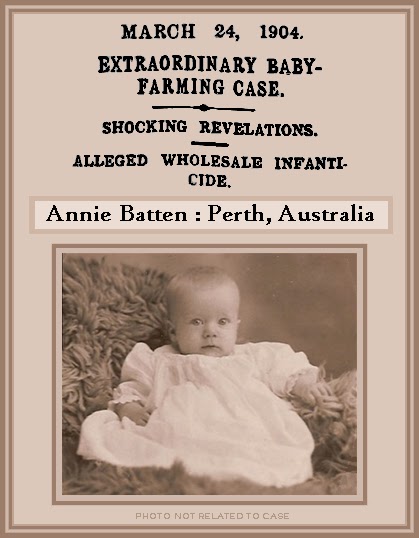