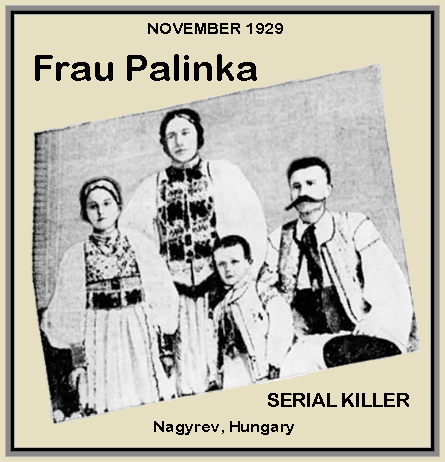 EXCERPT: Nagyrev, Hungary – The widow Palinka only murdered one husband but it worked so nicely that she could not resist getting more of the stuff and in two years slipped six more members of her family, her parents, two brothers, sister-in-law and aunt, into the graveyard. By so doing she inherited a nice house and two and a half acres. This, however, was contrary to the rules of the syndicate which was supposed to be entirely a man-killing enterprise, with an occasional child thrown in, but never a woman.

The Palinka widow did her work with an ostentatious flourish. She would first administer a small dose, just enough to give the victim a touch of cramps. Then, to cure this, she would rush to the city and return with a bottle of expensive stomach medicine, from which, in the sight of everyone, she would give the sick person generous doses till he died, of course, she had poured out the original contents and refilled the bottle with the flypaper water, obtained from the nurse.

[“100 Self-Made Widows in One Jail – Husband Poisoners – Rumours of the Wholesale ‘Removal’ of Unwanted Husbands Start the Authorities to Open Dozens of Graves in the Village Church Yard at Nagyrev, Hungary, With Startling Results,” The American Weekly (San Antonio Light) (Tx.), Nov. 24, 1929, p. 3] 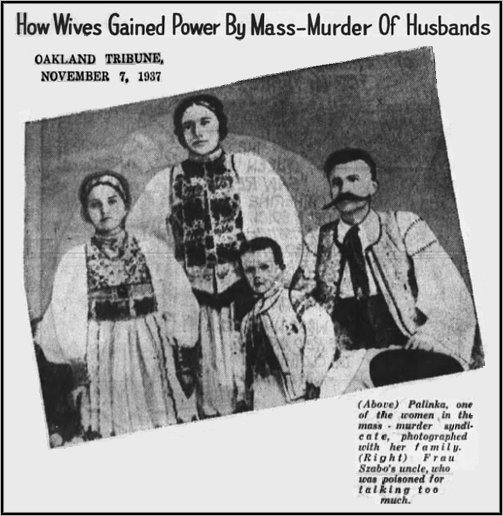 SEE: “How Women Gained Power By Mass-Murder of  Husbands”