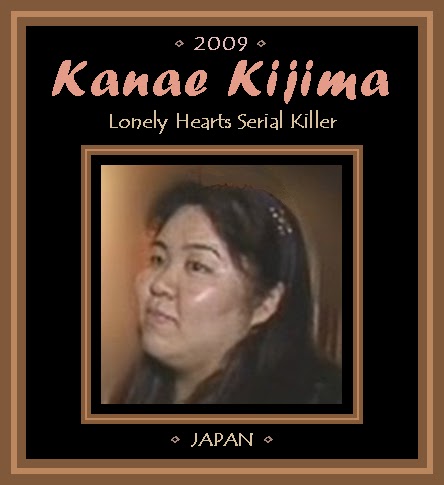 On April 13, 2012, Kanae Kijima, 37, was sentenced to death by presiding judge, Kazuyuki Okuma, in Saitama district court, for three murders of three men: Yoshiyuki Oide, 41; Keizo Ando, 80; Hideki Maruyama, 53. The judge stated that “There is no room for leniency as the defendant committed the crimes for selfish purposes. She reiterated irrational excuses in court and did not show any remorse.”

Dubbed “Konkatsu Killer” by the media for the konkatsu (marriage-hunting) sites she frequented, she met the men on internet dating sites and poisoned them with carbon monoxide by burning charcoal briquettes after giving them sleeping pills. Kijima reportedly set up each death to look like a suicide: In the latest case, she’s suspected of putting a sedative in one man’s beef stew then poisoning him with carbon monoxide.

The trial featured two opposing narratives: prosecutors said she killed the men so she would not have to pay back the money they had given her. Kijima’s lawyer said they had either committed suicide because broke up with them or died by accident. 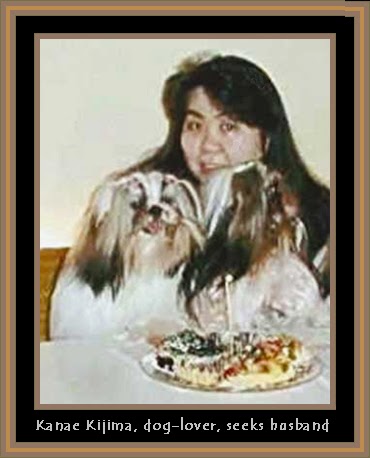 In her blog and dating profiles, Kajima portrayed herself as an accomplished cook with expensive tastes in clothes and jewelry. She cropped and altered photos of herself to make herself look more attractive. She’d usually pose as a prospective bride, but sometimes she played a nurse or therapist to better lure a specific target. In just a few years, she allegedly made $2.2 million off her various paramours.

When Kijima’s apartment in Tokyo was searched on Nov 3, 2009, police found vast amounts of medicine, including cold remedies and drugs known to induce drowsiness, that had been prescribed by at least 10 different doctors. Traces of different sleeping medicines were found in the bodies of three other men who died in similarly suspicious circumstances, and all of whom had met Kijima through lonely heart websites. 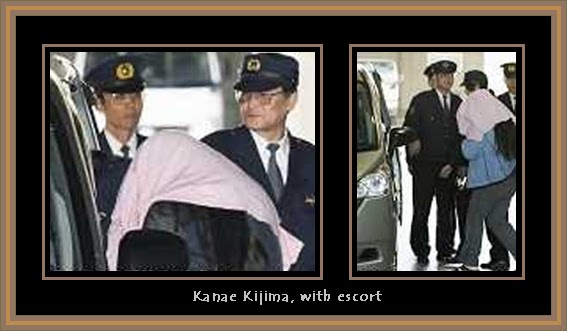 Yoshiyuki Oide, a 41-year-old from Tokyo, was found dead in August of carbon monoxide poisoning in his car, a common method of committing suicide in Japan, yet unusual because the keys were not in the locked vehicle and shortly after he had transferred Y5 million (£33,175) to his “fiancee.”

Keizo Ando, 80, was an invalid who died in May in a house fire. Kijima had served as his nurse, was seen at his home in Chiba Prefecture the day before the fire and had withdrawn money from his bank account.

Four additional victims are suspected: The naked body of Sadao Fukuyama, a shop manager, was found at his home in Chiba Prefecture after he had loaned Kijima Y74 million (£491,000), and another boyfriend, identified as 53-year-old Takao Terada, who died of carbon monoxide poisoning at his home in Tokyo in February. The body of Kazumi Yabe was discovered on the seabed in April after he apparently died in a fishing accident, Hideki Maruyama was found face-down in a stream in October and an unnamed journalist was run down by a train in May 2004.

Kajima was convicted of three murders (Hideki Maruyama, Keizo Ando, Yoshiyuki Oide) on April 13, 2012 and was sentenced to death. 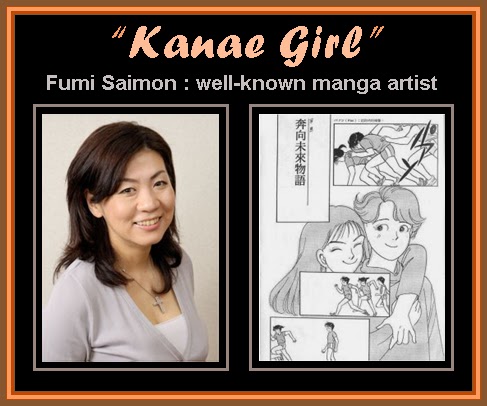 ►The “Kanae Girls” – fans of the serial killer, have been “conspicuous in the courtroom” throughout the 100-day trial.

Here are some quotes by, and about, the Kanae Girls.

1) Kanae Girl in her 30’s #1 – “I’ve been trolling marriage sites for a year without meeting anyone worth meeting,” Shukan Bunshun hearts from one fairly typical “Kanae girl,” a woman in her 30s. “I thought I could learn something from her. Also, I wanted to know the psychology of men who could be so utterly taken in.” [Kuchikomi, “Young women interested in how plain-looking ‘Black Widow’ lured men to their doom,” Japan Today, Apr. 23, 2012]

2) Kanae Girl in her 30’s #2 – “I wanted to know what kind of men the victims were,” says another, in her 30s. “Men being taken in by a woman like Kijima give me a kind of satisfaction. Serves them right.” [Kuchikomi, “Young women interested in how plain-looking ‘Black Widow’ lured men to their doom,” Japan Today, Apr. 23, 2012]

4) Kanae Girl, Fumi Saimon, manga artist – “There’s a feeling that she shattered the illusion that when it comes to sex, men call the shots,” says manga artist Fumi Saimon. “You have all these guys coming on to you, ‘Hey, listen baby, I got sexual techniques that make beautiful women swoon’ and all that. Kijima turned that on its head. Good for her! [I almost forgot I was in the courtroom for a murder trial].” [Kuchikomi, “Young women interested in how plain-looking ‘Black Widow’ lured men to their doom,” Japan Today, Apr. 23, 2012; the bracketed portion of the quote is taken from: “La ‘Viuda Negra’ tiene a su grupo de admiradoras, las ‘Kanae Girls,’” Yumeki Magazine, Apr. 23, 2012]

5) Journalist (female?) – “Usually a murder case has the smell of blood about it,” muses a journalist covering the trial. “You imagine how the victim suffered as he died. But here – carbon monoxide poisoning – that element is missing, so you’re left admiring someone who got her hands on 100 million yen and lived a celebrity lifestyle.” [Kuchikomi, “Young women interested in how plain-looking ‘Black Widow’ lured men to their doom,” Japan Today, Apr. 23, 2012] 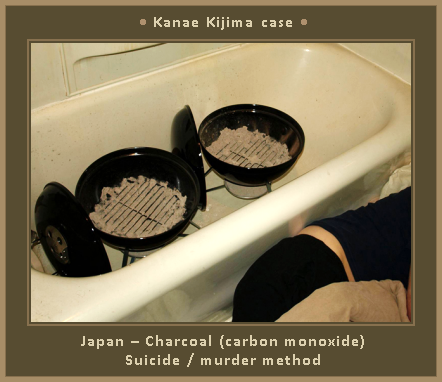 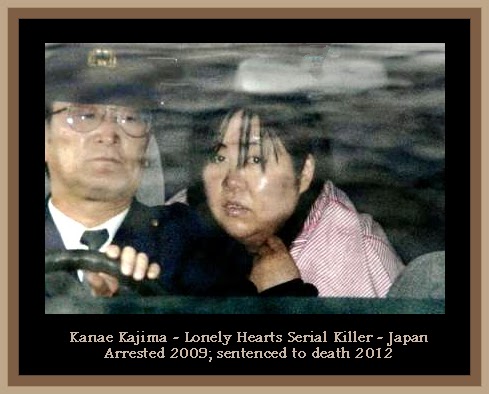 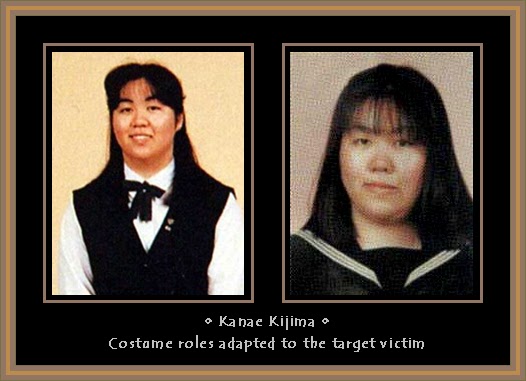 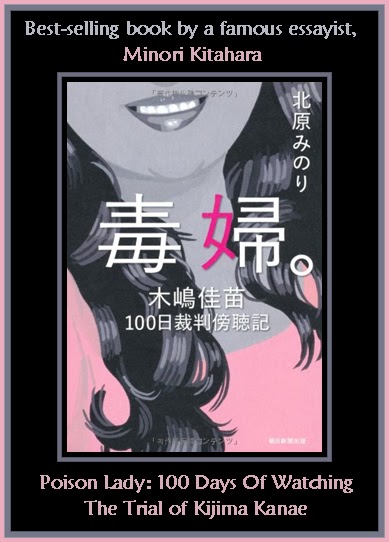 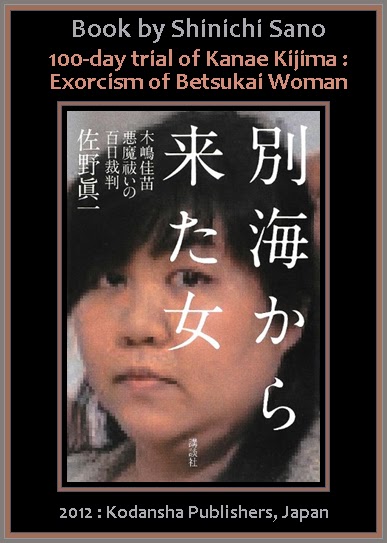 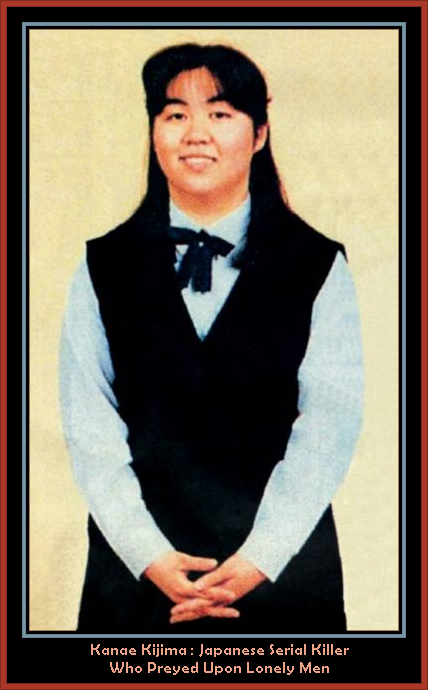 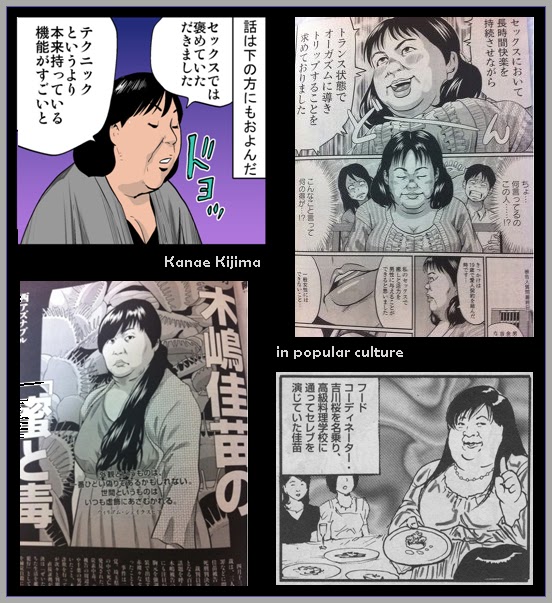 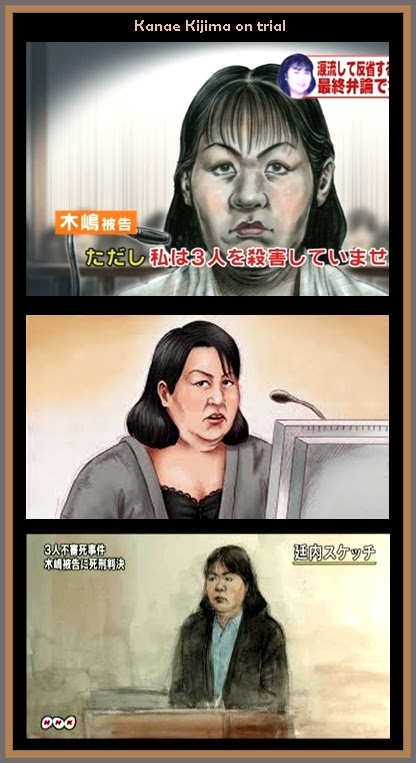