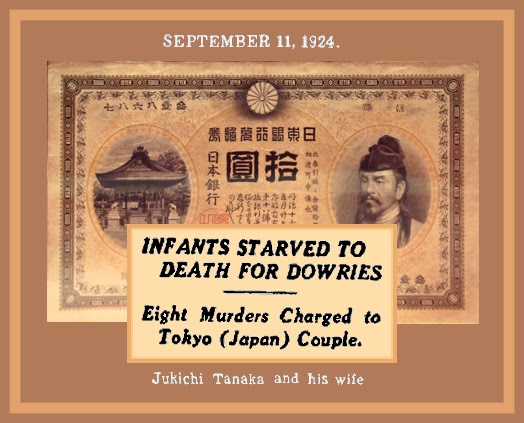 FULL TEXT: Tokyo.— A crime that reads like one of Cynthia Stockley’s African horrors and makes the story of Bluebeard mild by comparison has been discovered in a Tokyo suburb.
Jukichi Tanaka, thirty-five years old, and his wife, thirty-one, have been arrested on a charge of starving to death eight children whom they had adopted in consideration of dowries amounting to about $35 each. The crimes, covering three years, were discovered by the police when they were called to investigate the rumor that the couple were starving two children whom they had recently adopted after receiving the dowries.
When the officers rescued the children one was so weakened by hunger that he died and the other is being cared for by the authorities.
According to the Japanese institution of adoption, parents who cannot afford to give their children the best opportunities may offer them to more affluent families who are childless or packing in a male heir. It is frequently customary for the family to pay a dowry to the family adopting the child. The Tanaka family represented themselves as being in prosperous circumstances.
A grewsome collection of human bones was discovered in a closet in the Tanaka home.
[“Infants Starved To Death For Dowries - Eight Murders Charged to Tokyo (Japan) Couple.” The Kingston Daily Freeman (N.Y.), Sep. 11, 1924, p. 7]
***