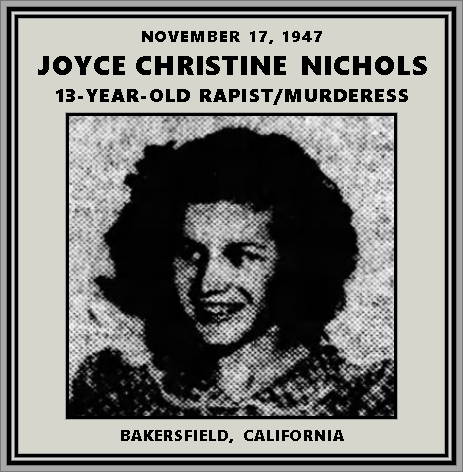 The girl would give no reason for the slaying and apparently could not recall what impulse led her to beat Myretta to death, according to Sheriff John Loustalot

Joyce, a rather attractive brown-haired girl. was taken out of a classroom at Emerson Junior High School this morning just 40 hours after the body of her playmate was found in the cave by Dep. Sheriff Otto Olofson.

Myretta, blue-eyed daughter of Mr. and Mrs. Earl Jones, was last seen by relatives about 3:30 p.m., Monday when she left on an errand to a grocery store in the Casa Loma district.

Her mother's frantic call to the Sheriff's office an hour and a half later sent a posse of deputies and neighbors scouring the area until Olofson peered into the blood-spattered cave dug by children as a "pirate's den" in the 80-acre Kern County fair ground site.

Hampered by erroneous first reports that the child had been criminally attacked before she was killed the investigation later swung from a search for a man to a hunt for a girl on the basis of small footprints found in the cave.

Joyce faced four criminal investigators calmly at the Sheriff's office until her stepmother, Mrs. Cal Nichols, appeared and collapsed at the girl's feet. The child broke into a flood of tears and told the following story, according to Sheriff Loustalot.

She met Myretta on the wav to the store, accompanied her to the Nichols' home, where Joyce finished up some house work.

She then suggested Myretta go to the cave "to play."

The 5-year-old walked to the cave and descended into its narrow confines where Joyce shortly demanded that her small playmate take off her clothes.

Myretta refused, the sobbing girl told investigators, but several slaps across the face persuaded the younger girl to comply.

But no sooner was Myretta stripped, her clothes in a heap on the earth floor of the cave, when Joyce snatched up the heavy rock and hit the crying youngster over the head, Loustalot continued.

After the killing, the 13-year-old left the body in the cave, washed her hands in a near-by canal and returned home to tell her parents what she had done, the Sheriff said.

"The father, an auto body mechanic, decided not to say anything until he figured out just what to do," Loustalot continued. "He ordered his wife to say nothing and also woke up the girl's brother Jerry 14, told him the story and cautioned him to keep quiet."

"Yesterday, Joyce went to school as usual while the stepmother washed out the girls bloody clothing."

Once the deputies swung to the track of a girl as the suspect the name of Joyce Nichols came to, light from several sources particularly one schoolmate who had seen the two girls walking together toward the cave.

Investigators talked to Mr. and Mrs. Nichols this morning after Joyce had gone to school but could get nowhere. After she was taken into custody, however, the parents admitted they had known of the crime "but were so scared they didn't know what to do," Sheriff Loustalot said.

After making her statement. Joyce was sent to the County Detention Home, where she was confined in a single room to await examination by doctors and psychiatrists.

FULL TEXT: Bakersfield, Nov. 21. – 5-year-old Myretta Jones met death last Monday as a result of blows on the head inflicted by Joyce Christine Nichols, 13, it was decided today by Coroner Norman C. Houze after the bobby-soxer admitted the crime on the inquest witness stand.

Joyce told of beating the kindergartner to death in a “children’s “private cave” when the child threatened to tell her grandmother of being mistreated by the junior high school girl. She said she hit Myretta with a rock four times then dragged her body back into the cave.

Mrs. Cal Nichols, step-mother of the bobby-soxer, also took the stand to testify she learned of the crime the same evening upon questioning Joyce after hearing on the radio of Myretta’s death and learning her daughter had been seen with the younger girl.

“She told me she hit a little girl with a rock and that’s all she could remember,” Mrs. Nichols said. “I guess she blanked out.”

Joyce, who is being held at the County Detention Home on a murder complaint, will be arraigned Monday or Tuesday in Justice Court and certified to the Juvenile Court.

County authorities said she may be returned to Superior Court for trial, however.

Funeral services for the slain youngster will be conducted tomorrow afternoon.

FULL TEXT: Bakersfield, Nov. 24. – Justice of the Peace Stuart Magee today certified 13-year-old Joyce Christine Nichols to the Juvenile Court after the bobby-soxer admitted at the hearing that she beat a kindergarten playmate to death with a rock a week ago.

While her stepmother, Mrs. Calvin Nichols, sobbed, Joyce declared she bludgeoned Myretta Jones in a children’s cave when the younger girl rejected her improper advances.

Juvenile Judge Warren Stockton now will have charge of the girl, with the option of disposing of the case under the laws pertaining to juveniles or returning her to Superior Court for criminal prosecution. 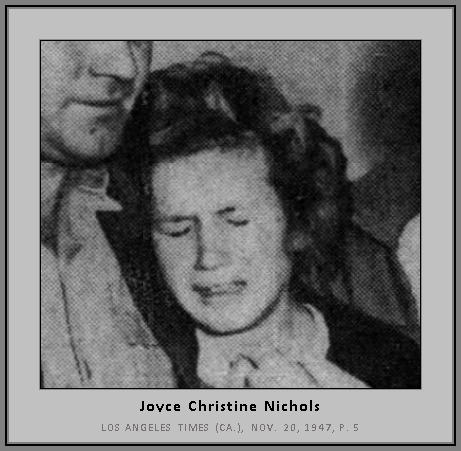 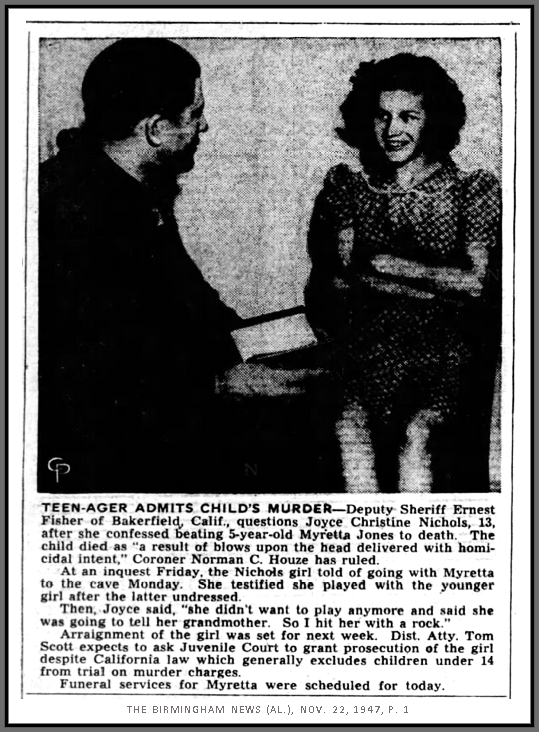 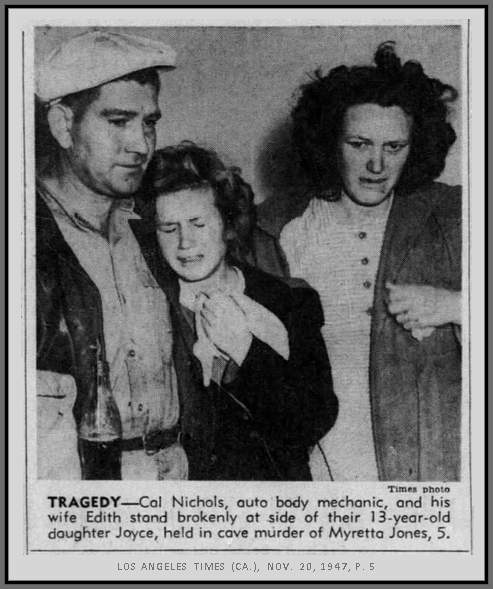 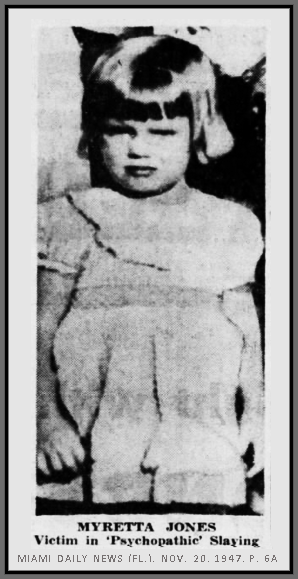 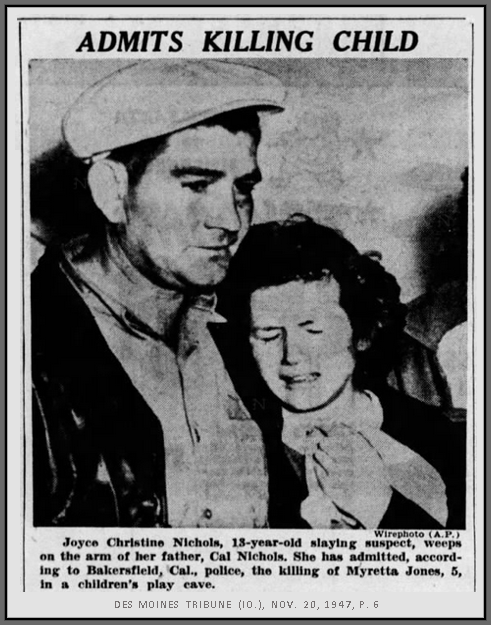 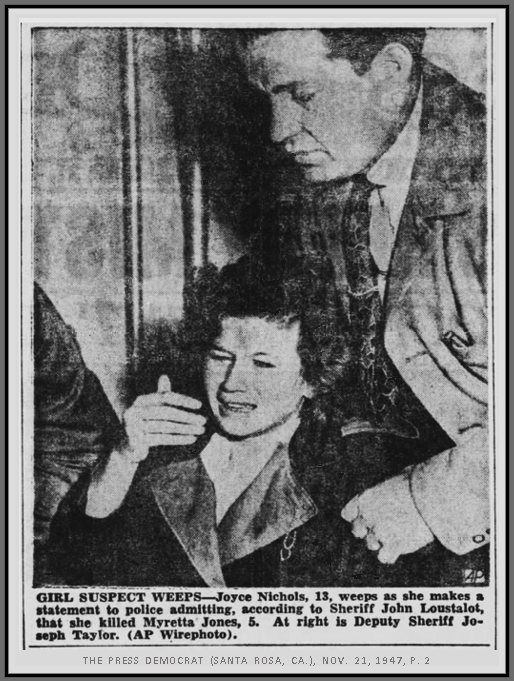 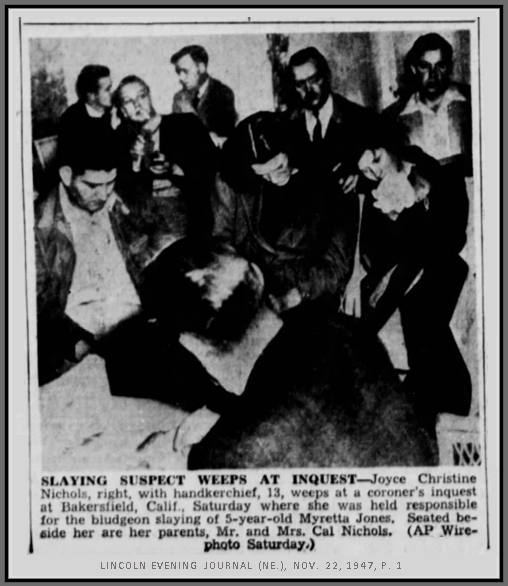