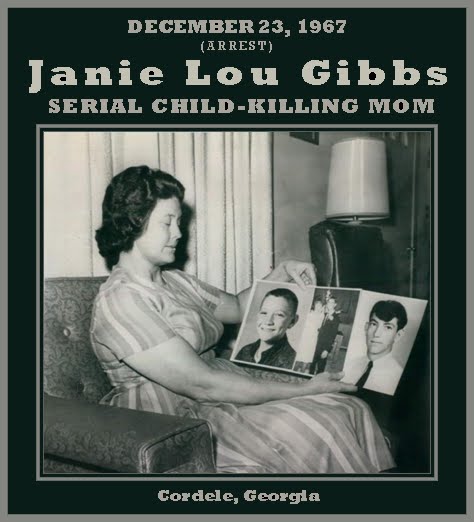 Wikipedia with additions: Janie Lou Gibbs (December 25, 1932 – February 7, 2010) was an American serial killer from Cordele, Georgia, who killed her three sons, a grandson, and her husband, by poisoning them with rat poison in 1966 and 1967.

The Gibbs’ home at Arabi burned after her  husband’s death and she moved to her present home in Cordele. The Crisp County coroner, J.D. Rainey, who also is an undertaker, directed the funerals of four members of the family. [“Three Bodies Exhumed; Murder Clues Sought,” syndicated (AP), Dec. 28, 1967, p. 1]

The deaths had previously been attributed to liver disease, but she was eventually arrested Christmas Eve 1967 after her oldest son, Roger Ludean Gibbs, 19, died in the same fashion as his father and brothers. On October 28, 1967, Roger’s month-old son Ronnie Edward Gibbs also died under suspicious circumstances [3 weeks before the death of his father].

Despite the unusual coincidences of so many deaths in such a short period of time, she blocked insurance adjusters’ requests for autopsies. Although insurance adjusters were suspicious, most of Gibbs’ neighbors and friends from church could not believe that the 35-year-old mother and former farmer’s wife who ran a day-care center could be a killer.

However, Gibbs’ daughter-in-law demanded an autopsy of her husband Roger. The autopsy found fatal levels of arsenic in the young man’s body. The court ordered the rest of her family exhumed and each was found to have been murdered.

She admitted methodically feeding rat poison to her family one victim at a time, but did not give a motive. In February 1968 she was found to be insane and served time in a state mental hospital until 1976. She was then convicted of poisoning the five male members of her immediate family and received five life sentences.

Gibbs, who in later years suffered from Parkinson’s disease, was released April 1999 on a medical reprieve into the custody of her brother and sister-in-law after being denied parole more than 17 times. She remained on parole and was required to check in once per year due to her deteriorating condition. She used a wheelchair and lived in a nursing home in Douglasville, Georgia until her death on February 7, 2010. She was clinically insane. [Wikipedia, Mar. 14, 2014] 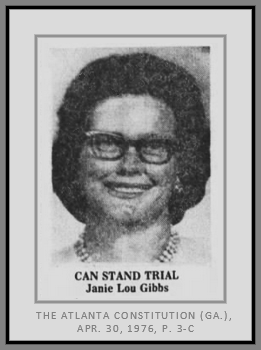