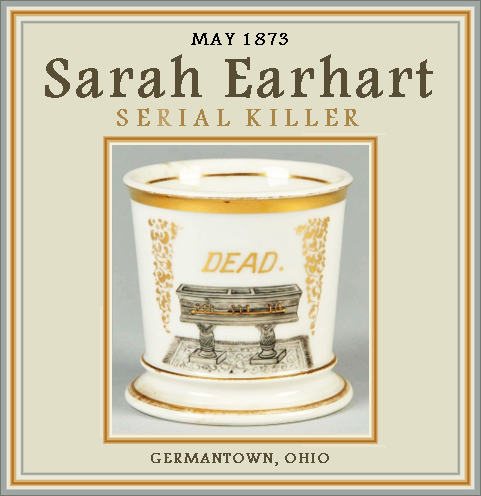 Note: Some sources give the spelling "Earhart," others have "Earhardt" or "Earheart."

FULL TEXT (“Earheart” in original): Germantown, Montgomery County, Ohio, has a sensational poisoning case. Sarah Earheart [sic], an old woman seventy years of age, is charged with putting arsenic into the coffee-pot of a family named Hanna, while enjoying their hospitality at dinner. The Earhearts hand Hannas are connected by marriage; Michael Earheart, the old lady’s son, having married Mary Hanna, who is a daughter of Mary Hanna, who is a daughter of John Hanna, Se., about a year ago. The families have always been intimate and friendly until now. John Hanna, Sen., aged sixty; John, about thirty-six, and Catharine, thirty-five, all partook of the coffee. They were seized with violent vomiting, and remained sick for several days. Catharine sent for Dr. Donnelan, who examined the coffee pot, and discovered small granules, which he took to be white arsenic. She was arrested, together with her son, Mike, and examined before a magistrate. Catharine stated, that after dinner was over, when she was putting the things away, old Mrs. Earhart took a seat near the stove in the outdoor kitchen, where she was at work; that she asked her to go into the house, where it was pleasanter, but she declined, saying the kitchen was good enough for her. The coffee pot was on the stove, and the old woman sat within a foot and a half of it, and remained in the kitchen while she was running back and forward to the house, and the cellar. It is believed that it was at this time that the poison was dropped into the coffee. This is, probably, not her first offence. She is accused of poisoning her father, two of her children, and of burning her uncle’s barn about five years ago. The bodies of her supposed victims are all to be disinterred this week, and further horrible developments in confirmation of the dark hints thrown out against her will be awaited for with patience.

FULL TEXT (translated from German): An old woman, named Sarah Earhart (or Ehrhardt), and her son Michael were caught a few days ago in Georgetown, near Dayton, O., on charges that they tried to poison the Hanna family with coffee from the Clear paths. The Earhart family and the Hanna family are Pennsylvania-German craftsmen. Mrs. Earhart is over 70 years old, her son about 32 years. The latter married Mary Hanna about a year ago. The old and the young couple visited the Hanna family on April 22nd, and on this occasion the old woman, who was working in the kitchen, threw arsenic into the coffee pot, in which the rest of the coffee was should be warmed up for dinner. The Earharts then left. Old Hanna (an 80-year-old man), his son John and his daughter Katharine drank from the coffee and became violently ill. The doctor who came over recognized the cause and a chemical analysis found poisoning.

The old woman is now accused of committing a whole series of terrible crimes. Of course, as in all such cases, there may be a strong exaggeration; however, the popular voice pronounces that the woman poisoned her husband 18 or 20 years ago. It is also said that this monster had sent the first wife of her son Michael out of the world by means of poison. It is said that Michael's wife was less ill at the time and Dr. Hinkle was treated. However, the doctor considered her condition to be so harmless that he canceled his visits and entrusted the care of the patient to the old mother-in-law. In less than 24 hours, the young woman was a corpse.

Furthermore, there is serious suspicion against this woman that two or three years ago she poisoned the child of her son-in-law Martin Foutz by sprinkling arsenic on the child's buttered bread. The child died under acute symptoms of a poisoning.

Michael Earhart is also said to have had a woman in Indiana who is said to have died suddenly before he married the allegedly poisoned McLean. Michael denies, of course, that he had been married before his marriage to the McLean, but when he was courted Miss McLean, he was considered a widower throughout the area.

Shortly after Martin Foutz, a respected citizen of West Alexandria, heard that the Hanna family was suffering from an arsenic disorder, he fell into a dark, alienated mood and committed suicide a few weeks ago by shooting himself. As previously reported, Martin Foutz was the son-in-law of Sarah Earhart. He is said to have always shuddered before the old woman, a disgust that he could not overcome even in the presence of other people. He did not dare to look at the murderess and was visibly embarrassed even if his mother-in-law was merely mentioned.

At that time there was no suspicion against the old woman and therefore one could never explain the shy behavior of Foutz in the presence of his mother-in-law. Foutz is said to have known, as is now suspected, that his mother-in-law had poisoned his child and her son's wife. He did not dare to bring the matter to the public in order to save the family from shame, but when the enigmatic woman tried direct her lust for murder towards the Hanna family as well, his mind was affected and he committed suicide.

In West Alexandria, where Sarah Earhart is well known, she is openly accused of poisoning several neighbors whom she did not like. The same woman is also said to have set fire to a house in Alexandria.

When the rumors of the countless previous crimes that she is said to have committed committed came to her attention, and when her own brother initially refused to provide the bond, she showed some excitement.

The bodies of the first wife of Michael Earhardt [sic] and Martin Foutz's child will be excavated again and then examined.

FULL TEXT: The Grand Jury at Dayton, Ohio, have reported bills of indictment against Mrs. Earhart and her son Michael for poisoning the Hera [sic] family, of Germantown, Ohio, on the 22d of April last, with intent to kill.

FULL TEXT (“Earhart” spelling): Mrs. Sarah Earhart, an old woman, seventy years of age, is charged with the mother of her relatives; and now comes another charge, of Mr. Wm. McLain, who resides in the vicinity of Farmerville. His daughter, about four years ago, married Michael Earheart, son of the old lady, with whom he lived only three months, when she died under suspicious circumstances. Mr. McLain testifies as follows:

“Earheart lived apparently quite agreeable with his second wife, but at the end of twelve months she was taken ill, and was pronounced in a critical condition by her physician, Dr. Henkel, of Farmersville, who was at a loss what to term her affliction. She at length recovered from her illness, but she remained very weak from its effects, and on complaining her mother-in-law, Mrs. Earhart, of this fact, the old lady said she would give her a dose that would strengthen her, she had taken it herself, when she felt weak, and it had a powerful effect. There are persons living who can corroborate the story of the medicine, as related by the dying woman who took it. It is stated that the old lady mixed a white powder in molasses, which she offered her daughter-in-law. She at first refused to take it, but did so, when greatly urged to take it. Shortly afterward the patient complained of severe pains in her stomach, and the symptoms were those attending the administration of poison. Dr. Henkled [sic] was called, but he was unable to relieve the poor woman and she died in a few hours. At the time, the doctor did not hesitate to say the woman had been poisoned.

The sad incident created a good deal of talk in the neighborhood, but the McClain family refused to have any investigation made, feeling that it would be a greater affliction to parade the matter before the world than to suffer in silence. The examination of the Hanna family poisoning brought the affliction up anew, and since the indictment of Mrs. Earhart and her son for poisoning of the Hanna family, the death of his daughter by poison, as he verily believes, has so worked on his mind that he could eat and sleep but little, and he was impelled to make the prosecution of the woman whom he believes caused her death, determined that justice shall be done in the case.”

3 attempts; her husband, her son’s wife, her son-in-law’s child, and her husband’s first wife. 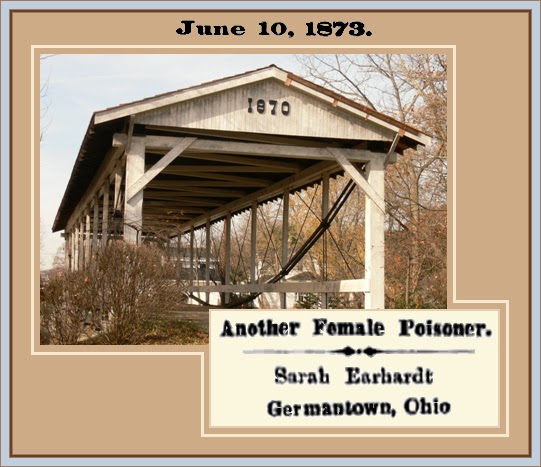