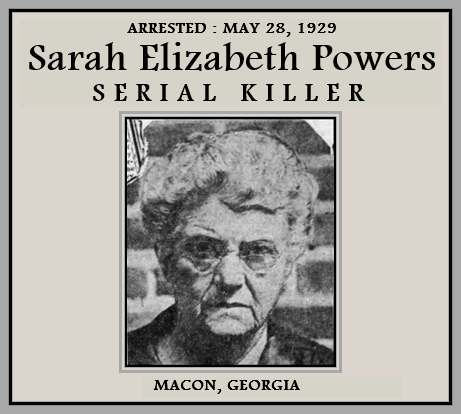 NOTE: The early reports on the case gave the name as “Mrs. J. C. Powers.”

Indictment of the woman and Earl Manchester, 21, who admitted he slew his roommate, James Parks, 25, at her insistence, was asked by Solicitor Gen. Charles H. Garrett.

Parks was slain May 27 after he had gone to live at Mrs. Powers’ home and named her beneficiary of an insurance policy on his life.

Mrs. Powers sought to collect $14,000 on the policy after Parks’ body was found on the bank of the Ocmulgee river, but payment was held up and an investment revealed the plot.

The death of Sam Wright, overseer on Mrs. Powers’ farm in 1924, and that of a colored tenant on the place are attributed to the woman by insurance company detectives, who likewise believe her guilty of burning houses on which she held fire insurance policies.

Mrs. Powers received insurance money from policies on the lives of both Wright and the negro.

“I put an advertisement in the papers (several weeks ago) for a young man to help drive a car and work about the house. Both Parks and Manchester came in response to the advertisements.

“I insured Parks . . . about four weeks ago. I didn’t have any money and needed it badly, so I began to think about collecting the insurance on him.

“I talked to Manchester about it for the last two weeks and finally he agreed to it. He was to get $1,000 out of the insurance money when it was paid to me.

“I gave him the pistol (found by officers in a wardrobe at her home today) and he carried it for several days. Monday night he came in and handed it back to me saying he had ‘Done the job.’ I did not inquire into the details”

Confronted with the woman’s confession, Manchester signed one:

“The old lady talked to me about bumping off Parks for two weeks or more. Finally I agreed and she gave me the pistol. I tried three nights in a row but it was the third night before I had the opportunity.

“ . . . but Monday about dark I told him we would go on Water street in East Macon and lay for a liquor car. He went along all right thinking we were going to hijack somebody.

FULL TEXT: Macon, Ga., Oct. 11. – A verdict of guilty of first degree murder without recommendation for mercy was returned by a superior court jury here today against Mrs. Sarah Powers, 71, tried for the “insurance murder” of James W. Parks, 18.

At the verdict, a mandatory sentence to death, Judge H. A. Matthews fixed the condemned woman’s date of execution in the electric chair as of November 29th.

The aged land-lady was specifically charged with being an accessory before the fact by plotting the death of the young Atlanta printer for a $14,000 insurance policy which named her as beneficiary.

FULL TEXT: Macon, Ga., Oct. 11. – A verdict of guilty of first degree murder without recommendation for mercy was returned by a superior court jury here today against Mrs. Sarah Powers, 71, tried for the “insurance murder” of James W. Parks, 18.

At the verdict, a mandatory sentence to death, Judge H. A. Matthews fixed the condemned woman’s date of execution in the electric chair as of November 29th.

The aged land-lady was specifically charged with being an accessory before the fact by plotting the death of the young Atlanta printer for a $14,000 insurance policy which named her as beneficiary.

FULL TEXT: Macon, Ga., June 11. – A jury in Bibb County Superior Court at 6 p. m. brought in a verdict of guilty of murder, with recommendation of mercy against Mrs. Sarah Elizabeth Powers. Under the Georgia law this automatically means a life term in prison.

At the first trial she was sentenced to die in the electric chair.

Mrs. Powers, 74-year-old former house proprietress, was convicted on plotting the death of James W. Parks, 19 years old, Atlanta orphan whom she had befriended. Earl Manchester confessed to the killing and said Mrs. Powers promised him $1,000 of the $14,000 insurance she held on Park’s life. Manchester is under death sentence.

When the jury announced it had reached a verdict, Mrs. Powers was brought into court from the jail, accompanied by a deputy sheriff and her daughter, Mrs. Lee Tharpe, who has been her companion almost every day since her arrest.

Mrs. Powers showed no emotion when the verdict was read. Her daughter became hysterical, but was calmed.

Judge H. A. Mathews immediately pronounced sentence of a life term in prison. Then the elderly woman was taken back to jail.

EXCERPT: From those who knew her she demanded all the respect of a lady, but here and there over Macon they will tell you that she has a past, that she operated a place on the south side of town, which police closed, and opened another in a different section and was “run out” again.

At the boarding house where she employed young Jimmy Parks and Earl Manchester in what appears to be a deep-laid plot to kill, the boys about town saw her “paying guests” permanent, or transient, could get what they wanted.

The police admit they have eyed Mrs. Powers and her establishments, for “paying guests” for some time, have even gone so far as to conduct quiet raids, but they never really “got anything” on her.

Of Mrs. Powers’ earlier life, Macon knows little. She is the widow of J. C. Powers, said to have been an Atlanta gambler who flourished in the old days. Since the death of Powers, who had previously had separated from her and gone to Florida, the woman is said to have married again but nothing is known here of the second husband save that there was one.

EXCERPT: Detectives and insurance operatives today said that they had evidence that Mrs. Powers had been “preying on insurance companies for about 15 years.” Burning of houses belonging to her, the death of an overseer on her Jones county farm, Sam Wright, in 1914, and the death of a negro, all were under investigation. The negro’s and the overseer’s lives were insured in Mrs. Powers’ name, as were the houses.

FULLTEXT: Macon, Ga., June 22 – The affairs of Mrs. J. C. Powers, awaiting trial on a charge of murder, and of her son-in-law, Lee H. Tharpe, are likely to be thrown into court in a civil suit by the heirs of Samuel B. Wright, former employe of Mrs. Powers, it was indicated today by Charles H. Garrett, solicitor-general.

Mr. Garrett said that he had received letters from relatives of Mr. Wright in North Carolina, indicating that they are contemplating legal action to recover damages. He said that while the insurance policies on Wright’s life was assigned to Mrs. Powers, the heirs would only have to show a plot to murder him. “There appears to be ample evidence to establish that ass a fact,” said Mr. Garrett.

EXCERPT: Macon, Ga., June 9. – Two deputies returned to Macon at 1 o’clock this morning, with Claude P. Burnham, 23, arrested on a warrant charging arson. He is wanted here for questioning in regard to the burning of two buildings owned by Mrs. J. C. Powers, aged landlady who now is held in connection with the death of James W. Parks. . . .  With the arrest of Burnham, the officers claim to have tightened the chain of evidence around Mrs. Powers. Burnham told the deputies that one night he was given barbeque sandwiches with a tainted odor. He didn’t eat any. Another night he said he found a gas jet turned on in his room, though he was certain the jet was closed when he retired.

EXCERPT: Charles Geeslin, also a former roomer in Mrs. Powers’ house … also charged in his statement that Mrs. Powers had attempted to poison him just before he left her boarding house in 1928, and had threatened him on another occasion. The alleged poisoning attempt, the affidavit said, occurred shortly after Geeslin had taken out life insurance, payable to his estate.
[“Earl Manchester Given New Trial; Extraordinary Motion Granted on Plea of New Evidence.”
Atlanta Constitution (Ga.), Feb. 23, 1932, p. 8]

EXCERPT: Manchester was visited by scores of “flappers,” as many as could gain entrance to the jail. They carried with them cigars, cigarettes, candies, cakes, etc., and in some cases, money.

Wikipedia: Hybristophilia is a paraphilia in which sexual arousal, facilitation, and attainment of orgasm are responsive to and contingent upon being with a partner known to have committed an outrage, cheating, lying, known infidelities, or crime—such as rape, murder, or armed robbery. In popular culture, this phenomenon is also known as "Bonnie and Clyde Syndrome.” 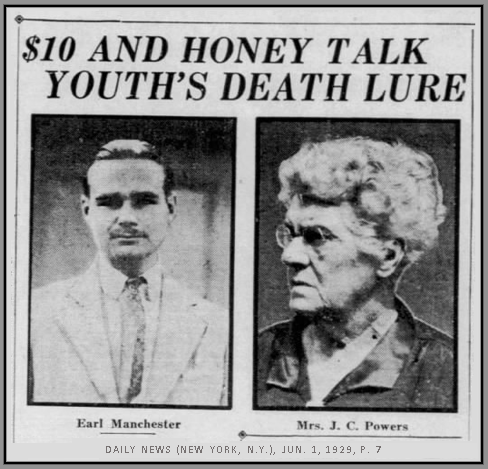 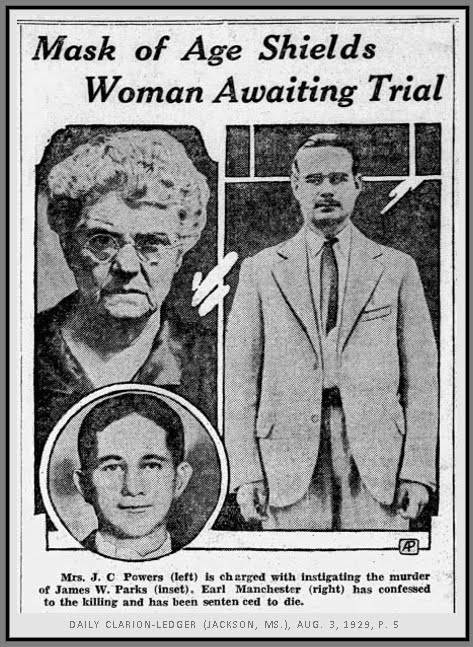 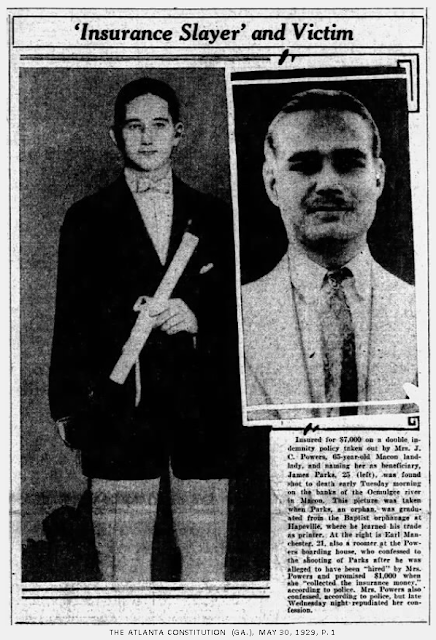 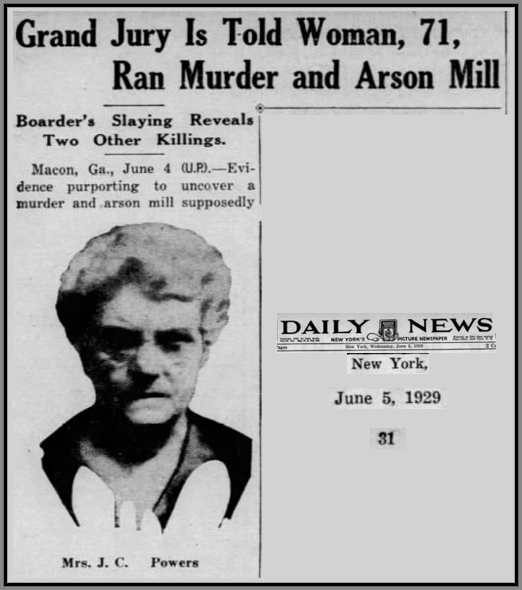 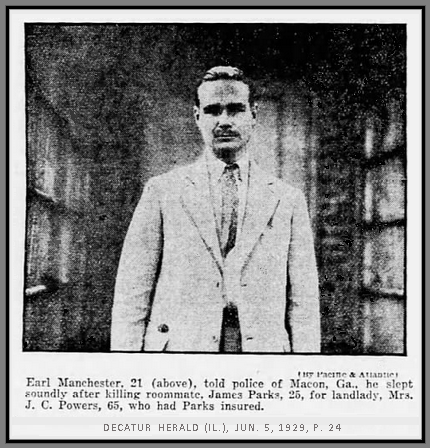 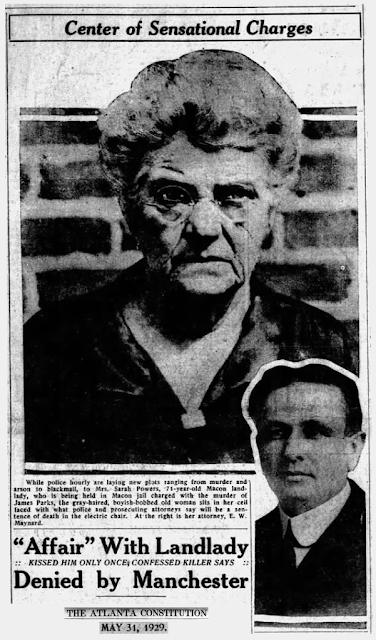 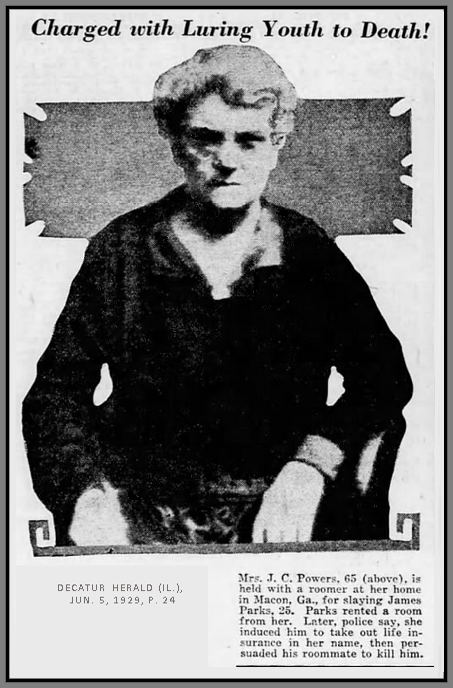 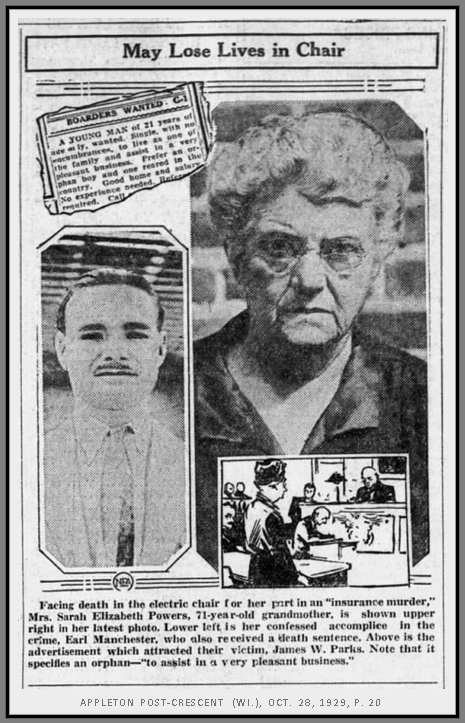 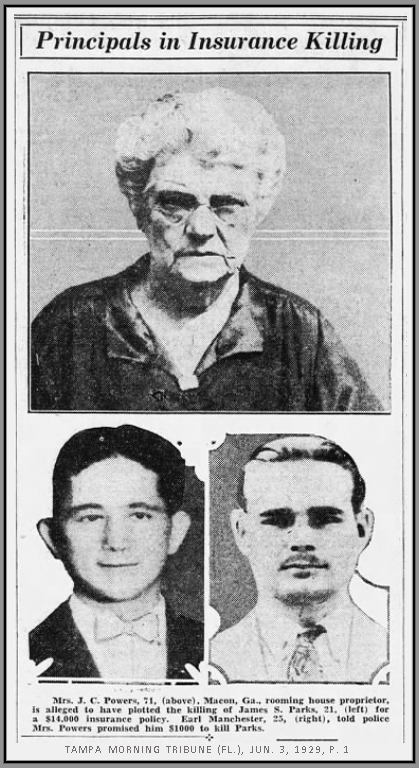