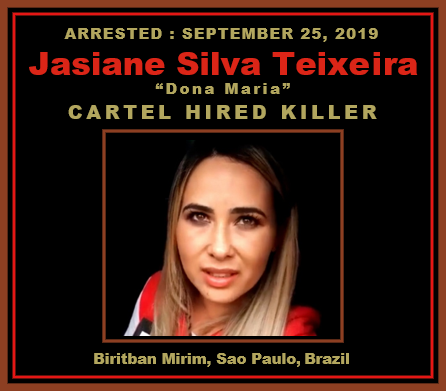 FULL TEXT: Jasiane Silva Teixeira has been arrested on suspicion of leading a murderous gang in Bahia, Brazil.

A suspected drug lord accused of ordering the deaths of more than 100 people has been arrested in Brazil.

Jasiane Silva Teixeira, 31, believed by authorities to be the biggest drug trafficker in the state of Bahia, is also said to have bought machine guns and grenades for her fearsome army.

She was arrested in a restaurant in the town of Biritiba Mirim in the state of Sao Paulo.

According to local media reports, she was wanted for robbery, drug trafficking, corrupting minors, arms trafficking and forgery.

Reports state the Secretary of Public Safety suspect her of having ordered the murder of over 100 people.

She was among the most-wanted people in Bahia, with one of her victims allegedly including a correctional officer, who died in Jerique prison in 2009.

Investigators believe Teixeira provided the murder weapon to her partner, Bruno de Jesus Camilo, who was serving time for drug trafficking in the prison at the time.

She allegedly took control of Camilo's drug trafficking operation after his death in 2014.

Teixeira allegedly worked with other drug traffickers from Rio de Janeiro to take control of drug trafficking in the south-east of the state of Bahia and in the neighbouring state of Minas Gerais.

Last year a plane was stopped by police in the town of Vitoria da Conquista in Bahia.

It was reportedly used to transport drugs and arms from Bolivia, Venezuela, Colombia and Peru.

Three men were arrested at the time.

She will be taken to the state of Bahia to be charged.

FULL TEXT (Auto-translated): Jasiane Silva Teixiera,30 years old, the Queen of Hearts from the Bahia State Department of Public Security, known in the criminal world as “Dona Maria,” was arrested Wednesday, September 25, 2019, in Biritiba Mirim, in the Metropolitan Area of São Paulo, by teams from the Task Force formed by investigates from the Department of Intelligence (DIP), Department of Repression and Combat of Organized Crime (Draco) and the 9th and 10th Coordination of Civil Police of the Interior, based in Jeqié and Vitória de Conquered, respectively, with the support of the Narcotics Investigation Police Station (Dise) in Mogi das Cruzes (SP). The Intelligence Superintendence of the Bahia State Secretariat for Public Security had an effective participation in the investigations that culminated in the location of the trafficker at the time of the police approach.

Stepdaughter of the most dangerous drug dealers in the Southwest region of the state, Antonilton de Jesus Martines, known as Nenzão, in 2008 Jasaine Teixeira was arrested for the first time, in the act, in the company of the stepfather’s companion and nephew, Bruno de Jesus Camilo, by the Civil Police of Victória da Conquista, for drug trafficking and illegal possession of weapons.

In 2009, already at liberty. Jasiane Teixieira provided the weapons and provided logistical support for the fulfilment of an order given by her companion, who was incarcerated in the Jequié Penal Complex, for the murder of a prison guard Luciano Caribé Cerqueira. The crime was consummated on December 16, 2010, when the public servant arrived at his residence, on Travessa Maria Eça. Barrio Caixa D’Água. The perpetrators of the crime were persecuted and ended up in confrontation with the police. Pezão was even transferred to the Serrinha Penal Complex, after disagreements with rivals.

After serving his sentence, Bruno de Jesus Camilo (Pezão) moved, along with Jasiane Teixeira, to the south of the state, where they continued to command the distribution and sale of drugs in the Southwest region, in addition to ordering the execution of rivals in the dispute for territories.

In 2014, during ‘Operation Sasquatch,’ investigators from the Homicide Precinct of the 10th Civil Police Coordination of the interior based in Vitória da Conquista, held on June 6, in the city of Porto Seguro, Bruno de Jesus Camilo (Pezão) resisted arrest and was killed in the confrontation.

Dona Maria was present at the scene of the confrontation in which her companion died, but managed to escape and allied herself with a trafficker from the Bonde do Maluco faction, the Bahia branch of the PCC (Primeiro Commando da Capital), known as Paulo TG. Ambitious, Dona Maria also joined smaller groups in closing deals for the supply of drugs and weapons, in addition to making lawyers available 24 hours a day to act in the defense of her partners. Under the agreement, Dona Maria would keep most of the profit from the sale of the drugs.

Upon assuming command of drug sales in the Southwest region, with ramifications in the North and Minas Gerais and in São Paulo, Jasiane Teixeira (Dona Maria) began to act with more ruthlessness than her stepfather and, later, her partner, ordering the murder of rivals in criminal actions that did not spare even people who were not targets of criminal acts, but would be in the places determined for the executions.

In February 2017, Jasiane Teixieira (Dona Maria) was included in the Baralho do Crime, a tool created in 2011 by the State Secretariat for Public Safety of Bahia to identify the most dangerous criminals escaping from justice, inserted as the “Queen of Hearts” card.

In 2018, Jasiane Teixeira (Dona Maria), suffered a severe setback when civil police officers assigned to the 10th Civil Police Coordination of the of the Interior seized, in Victória da Conquista, an aircraft that was used by the criminal organization she commanded to transport drugs and weapons from Bolivia, Venezuela, Colombia and Peru.

With the siege tightening, Jasiane Teixeira left the state and would be living as man and wife with Márcio Maria dos Santos, Marcio Carioca, the financial arm of the PCC in Leste Paulista.

The work of the Intelligence Superintendence of the Bahia State Secretariat for Public Security and the Intelligence Department of the 10th Civil Police Coordination of the Interior traced the steps of Jasaine Teixeira, who was living in Sáo Paulo, from where she continued to command the criminal organization in the Southwest region of Bahia, with false documents in the name of Débora Silva Dias, and on Wednesday, the 25th, civil police officers from the 9th and 10th Civil Police Coordination of the Interior, with the support of civil police officers from Sáo Paulo, carried out the arrest warrants, issued by the Court against Jasiane Teixeira in Biritiba Mirim, in the micro-region of Mogi das Cruzes, in Greater Sáo Paulo. She was captured in the company of her partner, Mário Faria dos Santos (Mário Carioca).

Jasiane Teixeira is to be returned, under high security, on Thursday, September 26, to Vitória da Conquista, where he will be held in custody at the Penal Complex at the disposal of Justice. 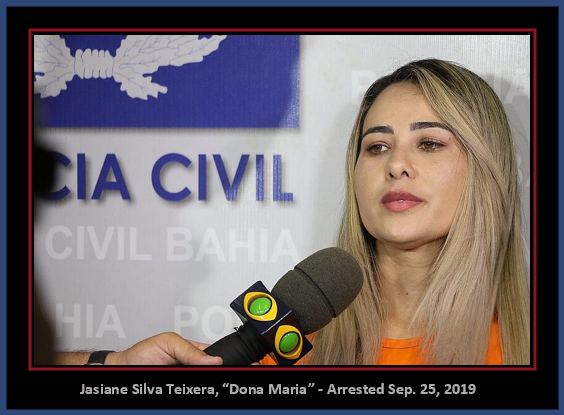 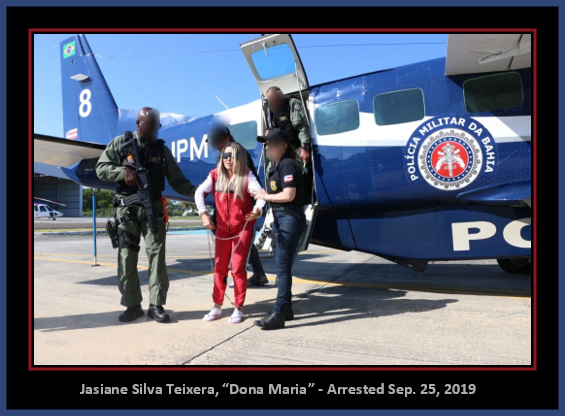 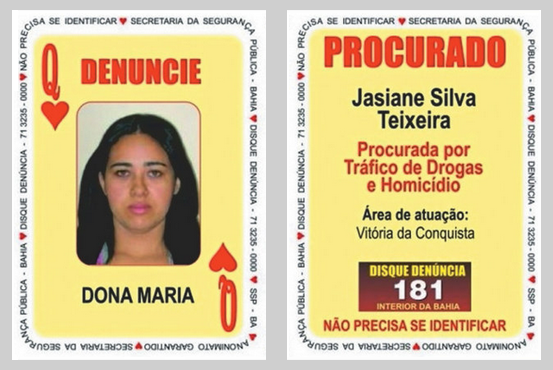 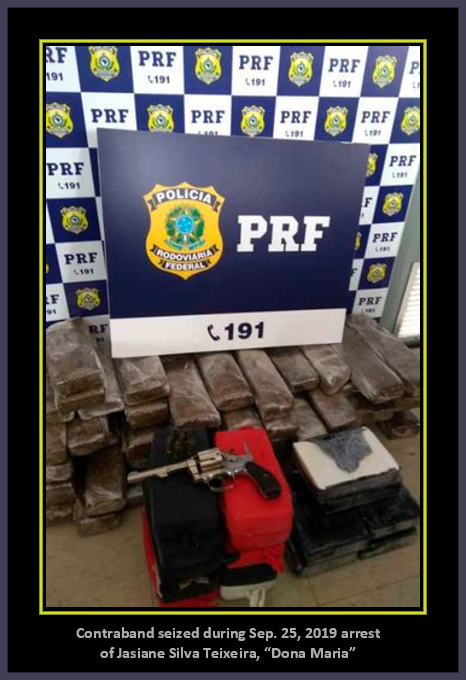 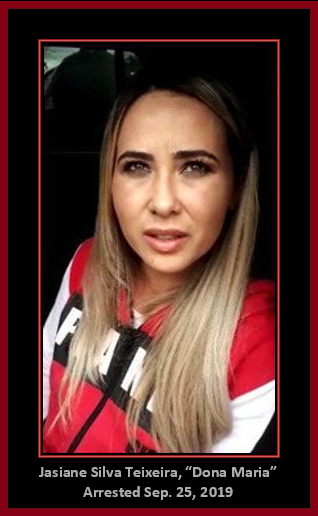 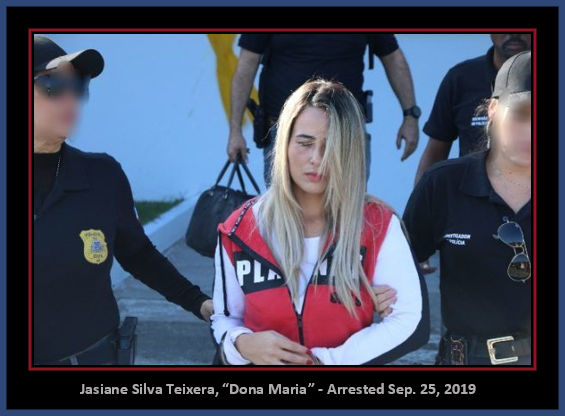