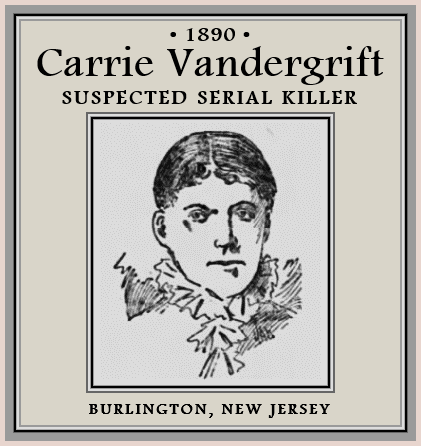 NOTE: Carrie Vandergrift was convicted of poisoning a son whose illness raised suspicions and resulted in intervention which apparently saved his life. Circumstantial evidence pointed to the previous suspicions surrounding the deaths of two husbands which were at the time thought to be caused by the same poisonous agent which she was known to have purchased in large quantities.

FULL TEXT: Mt. Holly, May 8. – The Vandergrift jury came in this morning with a verdict of guilty against Mrs. Carrie E. Vandergrift, for attempting to take her son’s life by means of croton oil. Early this morning it was rumored that the jury was evenly divided; that they had been balloting all night long, and that there was no chance of an agreement being reached, but this was afterwards shown to be false, as they stood 11 to 1 from the start, and were ready to come in any time after 8 o’clock last night had the court been present to receive the verdict.

Judge Garrison held himself in readiness to come at once in response to a telegram should the jury desire further instructions, but he was not needed, and the verdict was received by the lay judges. Mr. Vandergrift was pale and defiant as ever. When the names of the jurors were being called she gazed at each in turn with the utmost calmness, and when each said guilty she never changed a muscle. But there was an angry expression in her eye that could not be mistaken. Her counsel, Mr. Hendrickson thereupon made a formal motion for a new trial, which will be argued later in the term on a day agreed upon by the court. Mrs. Vandergrift expressed herself as being surprised at the verdict. She said she felt satisfied it would be not guilty, as she was innocent of the charge, but she supposed the jury was prejudiced against her.

With Frank Norman, her son, it was different. He came over in the train from Burlington as soon as the news of the verdict reached there and went to the jail to condole with his mother. “I thought it would be a conviction,” he said; “I felt sure if it for several days past. That jury has been influenced and I know it. I have seen a good deal since I came out here, and I know the jury has been fixed. They have been prejudiced. The people of Burnlington are prejudiced.”

[Mrs. Vandergrift Found Guilty. – She Betrays No Emotion at the Verdict, Satisfactory to Others.” The Philadelphia Inquirer (Pa.), May 9, 1890, p. 2]

FULL TEXT: Burlington, N. J., April 18. – “Hang her! Lynch her!” were the words hurled at Mrs. Carrie E. Vandergrift by an angry mob that surrounded her residence here when two officers of the court arrested here on a bench warrant charging her with having attempted to kill her son, Frank C. Norman, by means of croton oil. She assumed an air of indifference as the crowd of people assembled in front of her house this morning but her indifference vanished when she heard the shouts of the mob and saw the angry faces that greeted her when she opened the door. “I know what you want,” she said to the officers. “You need not read the warrant. Just wait a few minutes until I go up stairs and change my clothes and lock the house.”

~ Nothing the matter with Norman. ~

She was permitted to go up alone, and in a few minutes later came down stairs attired in a handsome black silk dress. By this time she was again at her ease, and informed the officers that she would take her son with her. “There’s nothing the matter with him,” she said. “It’s all bosh about him being poisoned. I am going to take him with me just to show the people that I am not a murderess.”

Norman, however, did not utter a word. He mechanically put on his hat and coat and ealked unsteadily to the carriage behind his mother. The crowd was so dense that the police had to forge a passage through it in order to reach the carriage. Mrs. Vandergrift was threatened repeatedly. She was deadly pale and glanced nervously behind her as if she expected some assault from the crowd.

The next instant they started off, followed by the mob cursing and yelling after her. The horses were put on a run and were soon out of the reach of the crowd. An hour later Mrs. Vandergrift reached Mount Holly with her son, and breathed a sigh of relief as she left the vehicle and walked to the jail.

She was willing enough to talk and seemed half inclined to tell her whole story. She said: "This whole thing is an outrage. I never tried to poison my son and he won't say sow I never gave him hi medicine. He always took it himself, and when Dr. Hall was prescribing for him he never took the medicine, but gave the doctor to understand that he did. The whole affair is a piece of spite work, done because I was about to bring suit against my late husband's two sons, Peter L. and John  Vandegrift, who have opposed me all the time. Frank Norman, my son, was sick when he came to my house in Burlington. I discharged Dr. Hall because he was doing my son no good. I do not deny buying croton oil; that is true. I got five cents' worth on several occasions to use on my corns, as I can prove by Dr. Rink."

~ Did She Poison Two Husbands? ~

It is now recalled that after the death of Joseph' Vandegrift during the summer of 1887 Druggist John Butler intimated that croton oil had caused it, and said he had sold Mrs. Vandegrift more croton oil than he had previously sold during the many years he had been a druggist. At that time Mr. Vandegrift's son, Peter, asserted that his father had been poisoned. It is rumored that Mrs. Vandegrift's first husband also died under circumstances-similar to the last illness of Mr. Vandegrift. She was the. latter's third wife, and is charged with having assisted him in getting a divorce from his second wife that he might marry her. She also had in View a third husband, and recently told Dr. Gauntt that she was to be married in June to a wealthy gentleman who was going to take her to Europe on a bridal tour.

In the case of her son. Dr. Hall, young Norman's physician, found that his patient showed symptoms of poisoning, and Mrs. Vandegrift was watched and was seen to purchase the oil. Once when she asked for the oil some harmless liquid was given her purposely, and a change for the better was seen in her son's condition. Prosecutor Budd thinks that her object in attempting to get rid of her son was to obtain an insurance mortgage of $38,000 which would revert to her on her son's death.

When arraigned in court the prisoner pleaded not guilty and was locked up in Mount Holly jail in default of $5,000 bail. It is thought, however, that she will soon get bail. The trial is down for April 28. 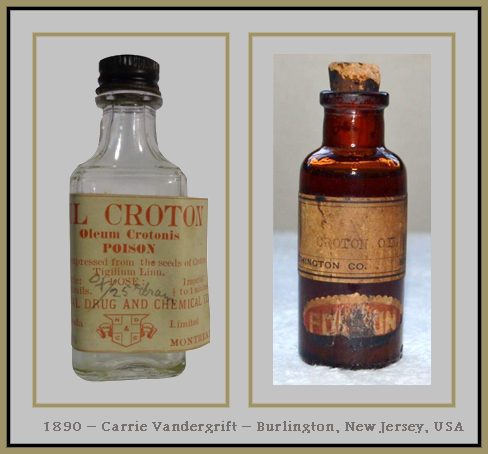 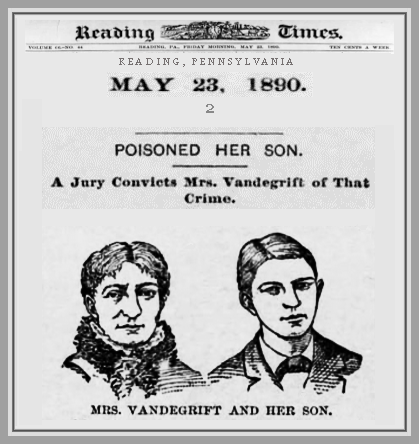 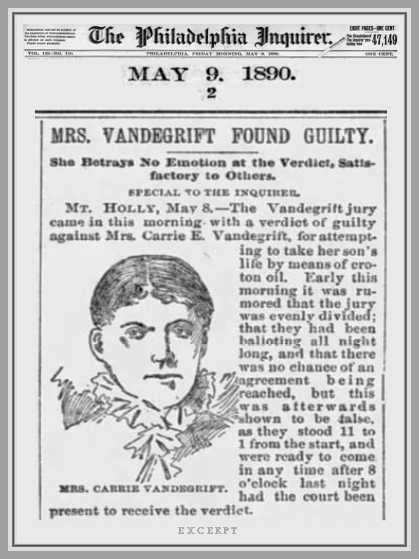