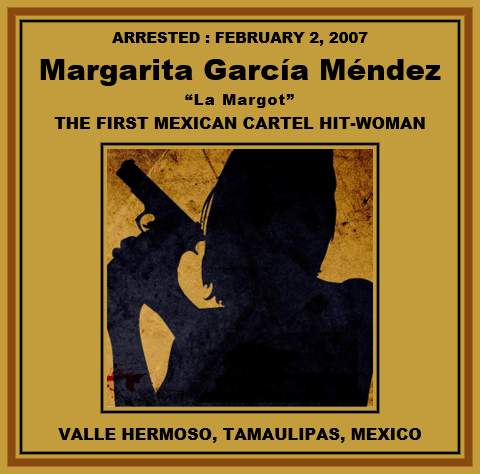 FULL TEXT(Auto-translated): Mexico City (La Silla Rota) - Margarita García Méndez, La Margot, knew that her life as a merchant would not give her the luxuries she dreamed of and that is why she decided to join the group of hitmen Los Zetas, when this group still worked as the armed wing of the Gulf cartel, for the year 2000.

His work, which he carried out for eight long years, consisted of lowering drug cargo planes, guarding them and, also on other occasions, organizing armed actions against rival groups.

Margarita's case is well documented by the authorities, since she was known as the first great hitman of drug trafficking.

Until a few years ago, the participation of women in drug trafficking was limited to making contacts, transporting drugs or laundering money, but the growing violence and family breakdown in social sectors in Mexico facilitated the insertion of women in other tasks, says Martín Barrón, researcher at the National Institute of Criminal Sciences (Inacipe).

Despite how spectacular it could be, the existence of Mexican hit men implies an implicit question: why are they accepted in drug trafficking, a traditionally macho world? The answer is that, in this social environment, there are women who are virtually the same as the male gunmen: they speak the same language, they are of similar ages and they belong to the same neighborhoods and communities.

The result of social mixing is predictable. "They can be as violent as men," said the Inacipe researcher.

Margot was not a dazzling or sophisticated woman, she was on the battle front.

This was even the case —according to a federal judge— when he was arrested in the company of one of Los Zetas, José Ramón Dávila López, El Cholo, in Ciudad Victoria, Tamaulipas, after both “acted jointly” with the Intent to murder a man over a traffic incident.

31-year-old Margarita García Méndez, La Margot, lived in Valle Hermoso, Tamaulipas, when her career in organized crime came to an end on February 2, 2007. That day, the C-4 Command Center in the capital of Tamaulipas reported to all the patrols that a man was lying on Bravos Street, between Hidalgo and Boulevard, shot in the head.

Immediately, the patrols that went to the site were alerted by radio that the assailants were fleeing in a van without license plates. The car was located in the Unidad Modelo neighborhood and realizing that they were hit, La Margot and El Cholo decided to confront the police.

In crossfire they wounded two policemen, but the numerical superiority prevailed and they were arrested. Just three days later, La Margot and El Cholo were behind bars in the Puente Grande prison in Jalisco.

Hers is one of the first documented cases of drug trafficking hitmen. But García Méndez's story as a hired killer ended in 2007, when she was arrested and entered the maximum security prison in Puente Grande, Jalisco. Behind her are the years of belonging to the Gulf cartel, her criminal career as a hitman and from that moment she faces reality: jail and justice.

According to the National Institute of Statistics, Geography and Informatics (Inegi), some 7,700 women are incarcerated for drug-related crimes.

Most of the cases were "for sentimental reasons," said the president of the National Women's Institute, Rocío Gaytán, because the detainees tried to introduce drugs to men's prisons, for their children or partners.

There are others who played a more active role, such as old women who sold drugs on a small scale, and others who participated directly in the line of fire.

This is the case of Margarita García, “La Margot”, accused by the Attorney General of the Republic of guarding drug shipments from the criminal gang “Los Zetas”, and who on some occasions participated in armed conflicts against rival groups.