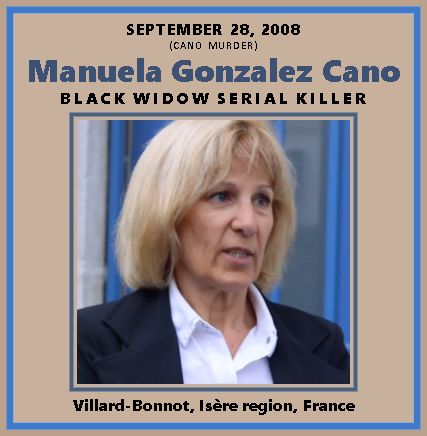 Manuela Gonzalez Cano, nicknamed, "the black widow of Isère," was charged in 2014 with murdering her husband Daniel Cano in 2008. On September 28, 2008, a fire broke out in the middle of the night where Daniel Cano was staying, but after an investigation, Manuela Gonzalez was not suspected. On October 31, 2008 that the lifeless body of her "husband" Daniel Cano was found on the back seat of the burnt-out vehicle near the village of Villard-Bonnot in Isère.

It was only after the combination of the previous facts with the death of two of his former companions by similar facts that the investigation finally qualified the act as an assassination attempt. Traces of anxiolytics were found during the autopsy, showing that he had ingested 3 sleeping pills. The presumed motive the sum of 235,000 euros from two life insurance contracts and an exemption from loan repayment. Her money problems resulted from a bad a gambling habit.

In a period of 27 years five of Manuela’s male companions and husbands have experienced terrible misfortune. Three of them died, two others recovered from poisoning. The two other suspicious deaths were regarded at the time as suicides. In one case there a fire broke out and the body of the victim was discovered in the cubbyhole. The other was asphyxiated in his garage by carbon monoxide. In each case, Manuela , had recovered, or attempted to recover, large sums of money.

Investigators found out that in the year 1983, Gonzalez' husband at the time spent three months in a coma for having taken large quantities of anti-depressants. He immediately divorced Gonzalez, now France's Black Widow, when he woke up.

The year after that, Gonzalez began had another partner, a jeweler who ended up hospitalized after drinking a cup of tea she had laced with morphine derivatives. This devious act was reportedly a plot to persuade the jeweller to write her a cheque for the equivalent of £10,000. Manuela Gonzalez was convicted of a two-year prison sentence for that crime.

She spent 5 years in prison preceding her trial for the murder of Cano. In 2014 she was convicted and sentenced to 30 years in prison for his murder. She appealed and due to court delays, she was released. The conviction was affirmed Drôme Assize Court. His lawyer announced a cassation appeal on Monday, May 30, 2016. 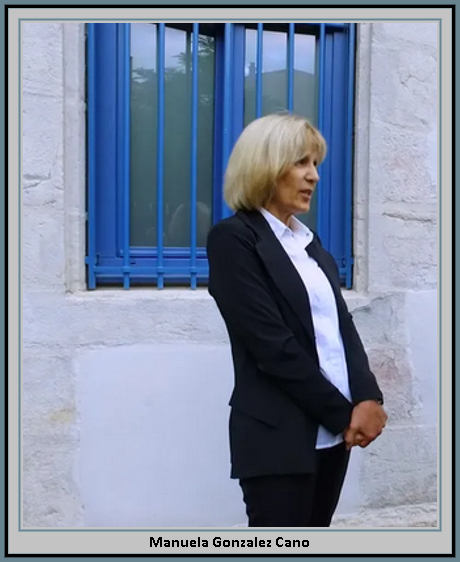