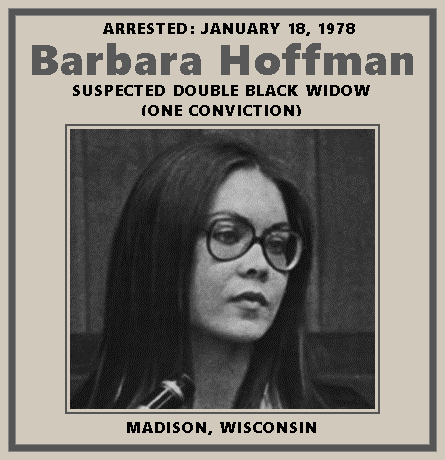 In 1974, Barbara Hoffman was a Phi Beta Kappa senior at University of Wisconsin Madison, majoring in biochemistry. Inexplicably she dropped out a semester before graduation and took a job at a “massage parlor,” Jan’s Health Studio, under the alias of Linda Millar. She became known as “Queen of the Massage Parlors.” In that occupation she Harry Berge Jr., a tire factory worker, and Gerald Davies, a shipping clerk at the university. She carried on a relationship with each outside the parlor. In 1977, she left the parlor and took a job in an insurance processing firm. She took out life insurance on each of her massage parlor boyfriends:  $34,000 on Berge, and $750,000 on Davies.

Davies was head-over-heels in love and wanted to marry. He referred to Barbara as his fiancée, yet he knew nothing of Berge.

On December 22, 1977, Berge met his death in Barbara Hoffman’s apartment. Two days later, Davies assisted Barbara – in removing the body of the man Barbara claimed not to know, from a snowbank behind her apartment and depositing it in another snowbank on Tomahawk Ridge near the Blackhawk Ski Club. Barbara had told him that the mysterious appearance of the corpse might be the result of shady characters associated with massage parlor who might be trying to manipulate her. Against Barbara’s wishes Davis went, on Christmas Day, to police headquarters and reported his actions. He led police to the makeshift snowbank grave. An autopsy was filed stating the cause of death as “five blows to the head.”

On December 18, 1978 Barbara was arrested and was charged with first degree murder. Davies was to be the prosecution’s chief witness. Barbara’s attorney advised her to cancel the life insurance policy on Davies. Despite being advised to steer clear of the suspect when she was released on bail, Davies kept up the romance. On Mar 24, 1978 he sent identically-worded letters asserting Barbara’s innocence to three Madison newspapers contradicting statements under oath he had given and asserted Barbara’s innocence.

The prosecution dropped the original indictment for the Berge murder and filed a new indictment stated the newly ascertained cause of death. The filed another indictment against Hoffman for murdering Davies.

On June 28, 1989 Barbara Hoffman was convicted of Berge murder; acquitted of Davies murder.
On July 2, 1980, she was sentenced to life in prison. She continued to assert her innocence.

CHRONOLOGY
1974 – Hoffman, a Biochemistry major, Phi Beta Kappa, University of Wisconsin Madison drops out to take a job. She became known as “Queen of the Massage Parlors.”
1977 – Barbara leaves parlor, works in insurance processing firm.
1977? – under alias Linda Millar used as employee of Jan’s Health Studio, Barbara Hoffman, biochemistry major at UW Madison, takes out $34,500 life insurance policy on Harry Berge Jr.
Dec. 22, 1977 – Harry B. Berge Jr. (52), Stoughton Uniroyal tire factory worker, dies. 5 blows to head given as cause of death in autopsy report.
Dec. 24, 1977 – Gerard T. Davies, shipping clerk at UM Madison audio-visual dept., assists in moving nearly nude body from a snowbank behind Barbara’s apartment to a snowbank on Tomahawk Ridge near the Blackhawk Ski Club.
Dec. 25, 1977 – Davies leads police to the body.
Dec. 18, 1978 – Barbara Hoffman (26) arrested for Berge murder.
Jan. 21, 1978 – Barbara Hoffman freed on $15,000 bail.
Feb. 1978 – Davies takes Hoffman in Spring Green. Considered prime prosecution witness, he is surveilled by police, for his protection.
Mar. 24, 1978 – Postmarked letters written by Davies he sent to 3 Madison newspapers contradicting statements under oath he had given and asserted Barbara’s innocence.
Mar. 25, 1978 – Gerald Davies (31), dies. Cyanide, 37x lethal dose, found in body. He was a key prosecution witness in the Berge murder case. Barbara Hoffman paid two $6,618 premiums on a $750,000 life insurance policy on Davies which she cancelled on the advice of her attorney in the Berge murder case.
Apr. 1978 – cause of dearth of Berge changed to cyanide poisoning.
Dec. 1978 – recharged in Berge case with changed cause of death; charged with Davies murder.
Jun. 16, 1978 – trial begins.
Jun. 28, 1989 – convicted of Berge murder; acquitted of Davies murder.
Jul. 2, 1980 – sentenced to life.
Both victims met Barbara at the massage parlor where she worked, Jan’s Health Studio.

FILM: Winter of Frozen Dreams is a 2009 independent American crime drama directed by Eric Mandelbaum, and starring Thora Birch, Keith Carradine, and Brendan Sexton III. The film follows the story of Barbara Hoffman, a Wisconsin biochemistry student and prostitute convicted of murder in the first televised murder trial ever. 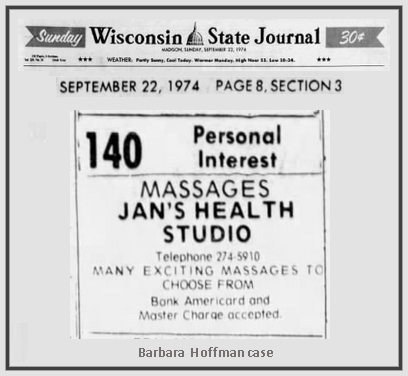 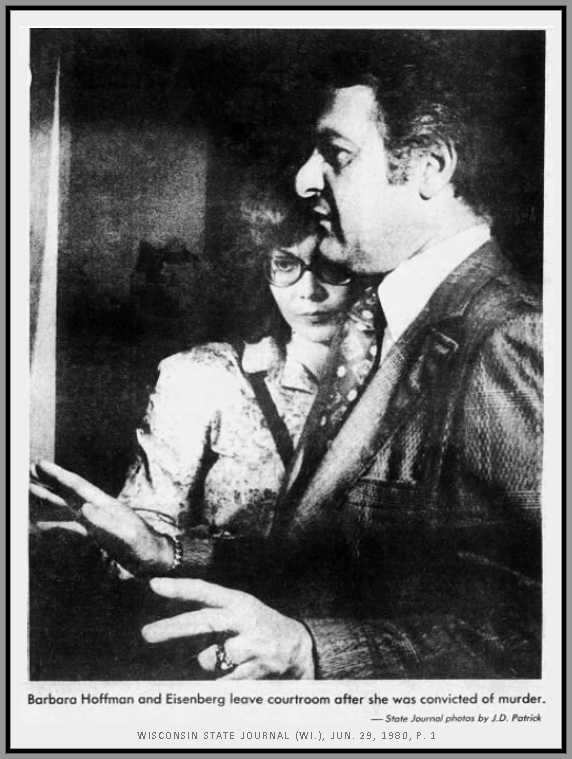 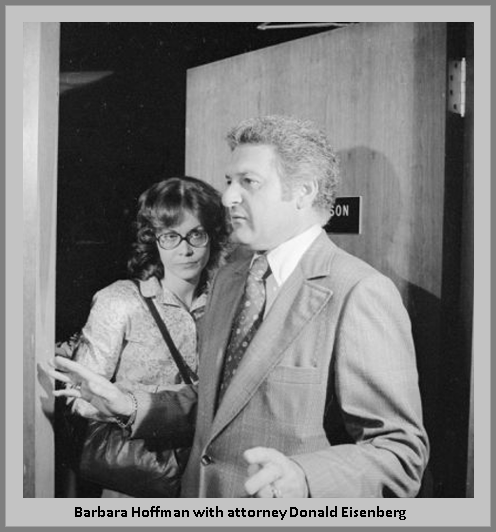 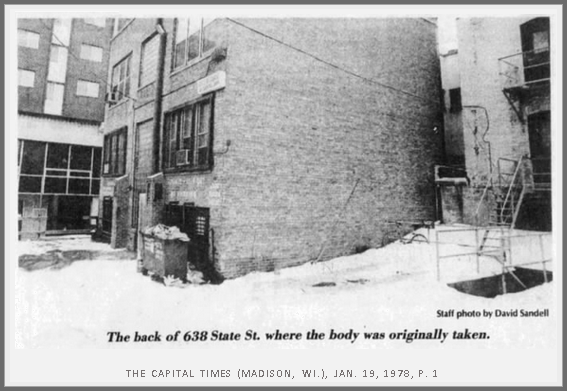 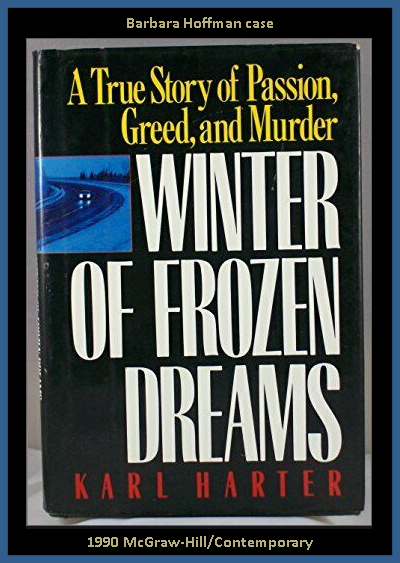 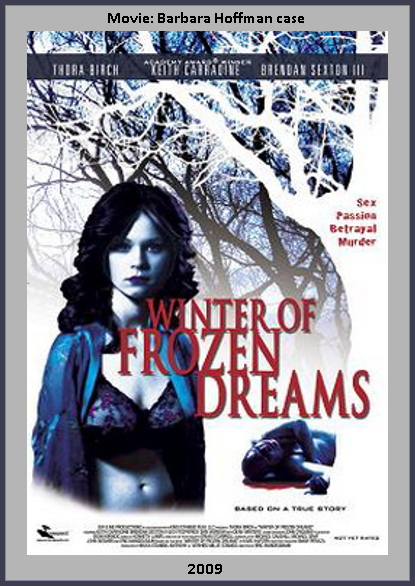