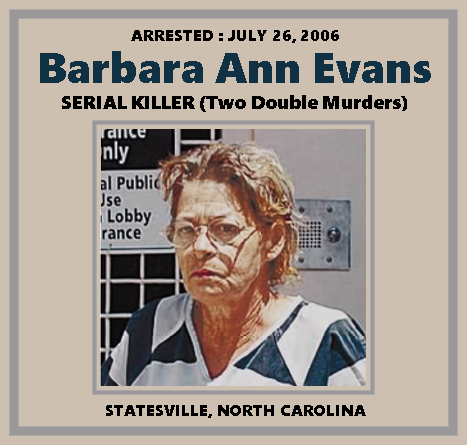 Barbara Ann Evans is charged with four counts of murder in the deaths of Sue and Don Barker and James and Ruth Delet Powell.

Evans was a frequent customer at the convenience store the Barkers owned and had shopped there as recently as last week, the store owners' son said. James Powell had once restored an antique car for Evans' late husband, friends said.

The two, double homicides of elderly people -- the first in January 2005 and the second nearly eight months later -- had unnerved residents of Iredell County about 136 miles west of Raleigh.

On Wednesday, residents buzzed about Evans' arrest and asked the question investigators are still probing. "Just plain, simple, why?" asked Marlene Barker, Don and Sue Barker's daughter-in-law. "And how could you do this to four good people?"

Of the more than 700 people authorities interviewed in the case, Evans of Jennings Road was the only person who knew all four victims, Sheriff Phil Redmond said at a news conference Wednesday. Redmond declined to say how she knew the four; it was unclear whether Evans knew Ruth Powell aside from their husbands' friendship.

Authorities said in October the same gun was used in all four killings. In 2004, the Sheriff's Office granted Evans four permits to buy handguns, Detective Sgt. Ron Wyatt said Wednesday. He declined to elaborate. Evans is being held without bail in the Iredell County jail. She appeared in court Wednesday afternoon in a black-and-white striped jail outfit and asked for a court-appointed attorney after first saying she thought she could afford her own attorney. Her next court appearance will be Aug. 14 unless a grand jury indicts her before then.

She didn't speak as she walked from the jail to the courthouse. James and Ruth Powell were shot to death in their Union Grove home Jan. 20, 2005. He was 74, and Ruth, who went by her middle name, Delet, was 71. Nearly eight months later, the Barkers -- Don, 62, and Sue, 63 -- were shot
to death in their home on Whites Farm Road.

Redmond didn't talk about the weapon or the specifics of the evidence against Evans on Wednesday, but he said she had been a suspect for months. "We had to be very thorough," he said. "We have quite a bit of forensic evidence."

He praised his detectives' work. "Not having a motive extended this investigation and made it much more intense," he said.

Evans was listed on her arrest report as 5 feet 2, 130 pounds, with a tattoo on her left buttock of a heart and the words "Bill's Harley." She was born in Troutman in 1941 as Barbara Lawing.

She was married to Gerald Baker of McDowell County, who died in 1995. In 2000, she married Willie Evans of Jennings Road north of Statesville. He died of a heart attack in 2002.

Her yellow frame house sits on Jennings Road near enough to Interstate 77 to hear traffic roaring by. A building behind the house was where Willie Evans liked to keep his old cars, including a 1947 Mercury, said neighbor William Wease, a retired pastor.

Wease and his wife, Lois, said they knew something was up when they saw a mobile crime unit and about 15 to 20 police cars at Evans' home last week.

The next day, July 20, Evans went to the Barkers' former convenience store to buy cigarettes and a newspaper and talked to the people inside, said Michael Taylor, 20, who was working behind the counter.

Taylor's father Robert took over running the store after his longtime employers were killed. Both wondered if there would be more arrests. "I wouldn't figure her capable of killing four people," Robert Taylor said. Authorities declined to say if anyone else might be involved.

Robert Taylor said Willie Evans, also known as Bill, came into the store frequently before he died and often brought James Powell with him. "They were like best friends," he said. "They did old cars together."

That was James Powell's hobby, neighbors and friends in Union Grove said. He had owned two convenience stores himself before retiring, and he spent much of his time afterward restoring antique cars in a workshop behind the Powells' single-story brick home on N.C. 901, said neighbor Steve Wooten, who adopted the couple's husky-German shepherd mix, Kipper, after their deaths.

"Every time I look out the window at that empty house," Wooten added, "it'sa strange feeling."

Just about everyone in unincorporated Union Grove knew the Powells, said Pal Ireland, co-owner of the Cook Shack general store.

"I knew them their entire life," Ireland said. "I really did think it would

be solved and that we would all be surprised."

EXCERPT: Seven and a half years after his friends were killed, store owner Robert Taylor is still looking for justice. Don and Sue Barker owned a country store north of Statesville.

"It was a senseless killing," Taylor said.

Deputies arrested an unlikely suspect, 65-year-old Barbara Evans. She was charged with killing the Barkers and James and Ruth Powell.

Three years later, prosecutors dismissed the charges against Evans after a judge found her incapable of standing trial. The judge ruled Evans had dementia and was progressively deteriorating and was not likely to recover.

"It just don't make no sense," Taylor said. "Because I've said it's no justice for the family."

“Evans Trial” – Website devoted to the case (but incomplete)
http://evanstrial.blogspot.com 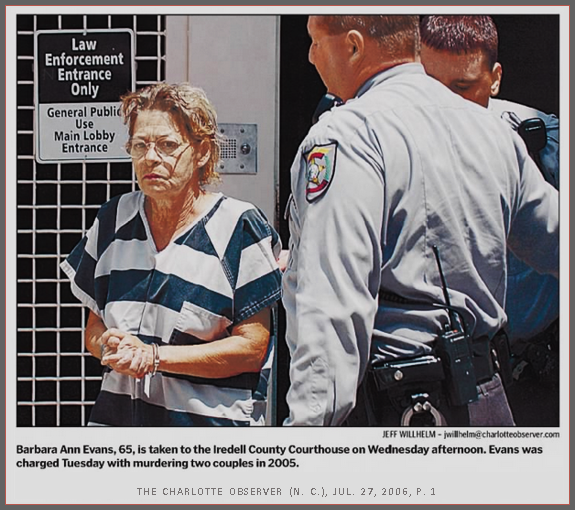 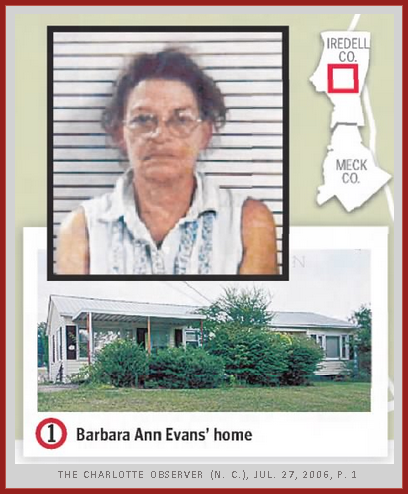 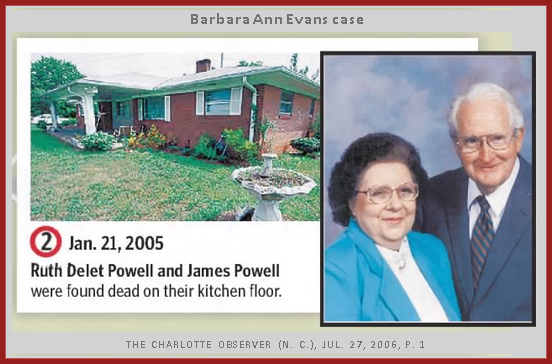 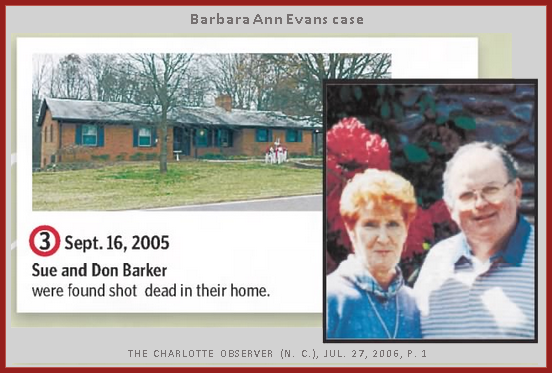 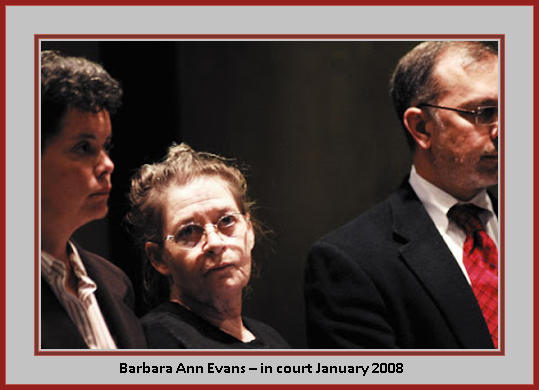