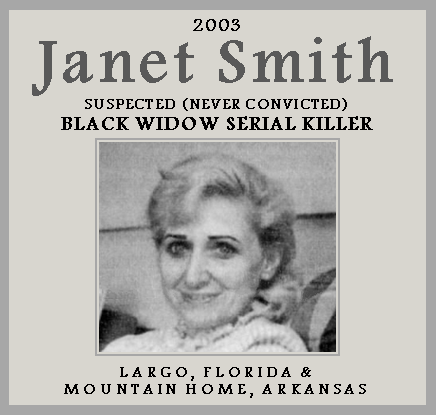 Janet Smith, a  breeder of Chihuahua dogs, died at the age of 71 in 2013. By the time she was criminally charged in 2003 she had seven husbands and two fiancés. She was suspected of murdering one fiancé, Charles Miller (66), and also husband, Randy Smith (47), she had insured for $230,000. Randy Smith’s son and daughter filed a lawsuit to block Janet from collecting the proceeds, asserting that their father had been murdered by his one of Smith’s ex-husbands, Griffin, under the supervision of Janet.

[Janet] testified that two months after Randy’s drowning, she accepted engagement rings from two Pinellas men. One was Barry Reitz, 64, who took out life insurance naming her as beneficiary. The other was Charlie Miller Miller, 66, who was found dead in his house by Charlie Griffin. Miller had heart troubles, and his doctor ruled it a natural death without examining the body. Janet denied having any insurance on Miller, though FDLE [Florida Department of Law Enforcement] agent Pfeil notes that there’s no central registry that can track insurance policies. “I don’t know how many more she might have had on Randy or anyone else, I have no clue. “I thought it smelled to high heaven,” says Circuit Judge George Greer, who ruled for Janet in the civil case. “There was truly a lot of suspicious stuff going on. But there was no proof.” [Source: Aug. 3, 2003]

“In May 1990, a few weeks after she divorced Griffen [sic] in another county, Janet made Smith husband No. 7. Within two months, Smith took out more than $100,000 in life insurance, naming his bride as beneficiary. He also made out a will, giving her everything he owned. In October 1990, less than a year after the couple met, Smith went fishing on the Suwannee River with Cecil Griffen, the handyman, even though Smith hated the water and couldn't swim, the children say. The two men had a fight, and Smith drowned. He was 47.” [Source: Oct 1, 2005]

Janet Smith's daughter, Julie Butikoper of Idaho Falls testified that she made contact with her mother in 1996, for the first time in 20 years, when she mistakenly heard that Smith was on death row in Florida for killing her husband. Though she hadn't lived with her mother since she was 8, Butikoper said, she came to Florida to reconcile. That went sour when her mother took her to river property she owned in Dixie County and described the drowning. "She said that Randy was stupid, and he didn't know that Cecil was her husband," Butikoper said. "He just thought of him as the handyman. She would laugh about it." At the river property, Janet Smith provoked a fight with her husband so Griffen and Randall Smith would go fishing at night by themselves, off a home-made raft in the middle of the river, Butikoper testified. When the two men argued, "Cecil pushed Randy overboard," Butikoper said. Her mother said she snuck down to the river to watch, "to make sure the job was done right." [Source: Oct 1, 2005]

[In 2002] Smith’s son [Matthew Paxton] secretly taped conversations in which he and his mother talked about killing an ex-husband in Arkansas [Griffin] for more insurance money. Police arrested her and charged her with solicitation of murder. . . . In the tapes, “Janet and her son discuss various options. They first talk of having Paxton drive Jay off a cliff in Janet’s car. “That would get the car paid off. That would get me a new car,” Janet says on the tape.  “I’d get the insurance money and get me the f--- out of here.”

They discuss shooting Jay in the head, then telling police it was suicide. . . .  The final plan, Paxton said, was to ask Jay to pull a tarp over the swimming pool [of the “mansion” Janet bough with insurance proceeds]. Paxton would push Jay in, throw the tarp over him and jump on top so he couldn’t get out. “You got to get him while the pushing’s good,” Janet says on tape. Melani Barnes, a friend who traveled with Paxton to Arkansas, told deputies she heard Janet discussing these murder plans as well. [Source: Sep. 19, 2003]

Soon after the 1990 drowning of Randy Smith, Janet became engaged to Barry Reitz.

Barry Reitz took out insurance years ago that pays Janet Smith $100,000 if he dies accidentally. They were dating at the time, but he grew cared and moved to Pennsylvania for a time to hide. Reitz, of Largo [Fl.], can’t cancel the policy, because Smith still pays the premiums. [Source: Aug. 3, 2003]

Janet was never prosecuted. None of the lawsuits against her succeeded. Her insurance income was eaten up by legal expenses and she ended up living on social security benefits. She died in Hollister, Missouri, in 2013. 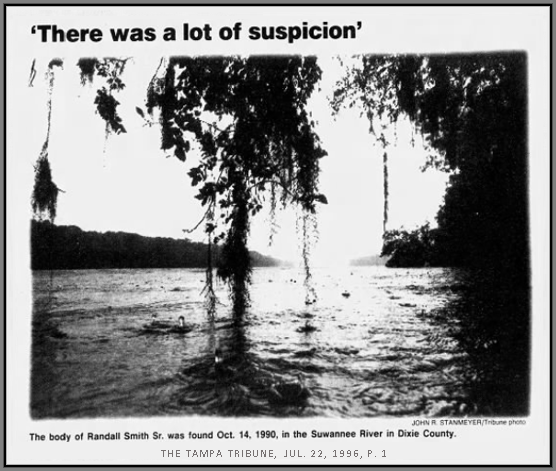 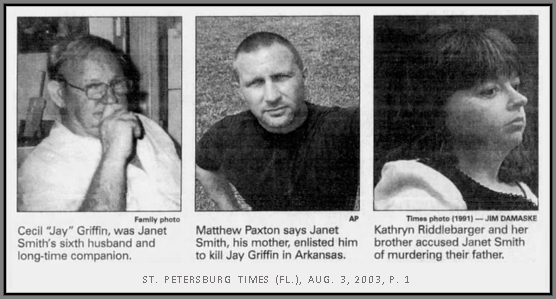 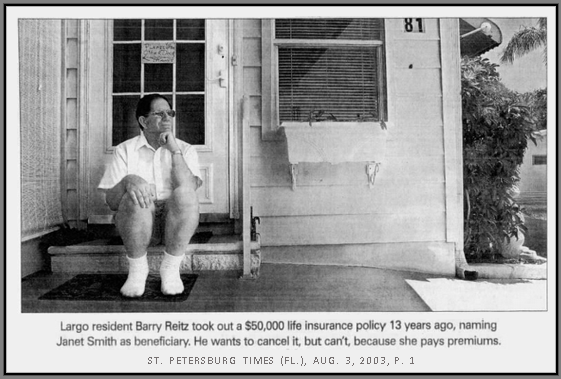 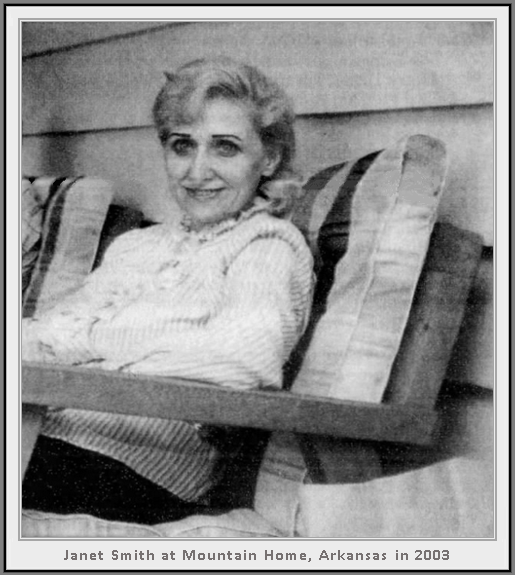 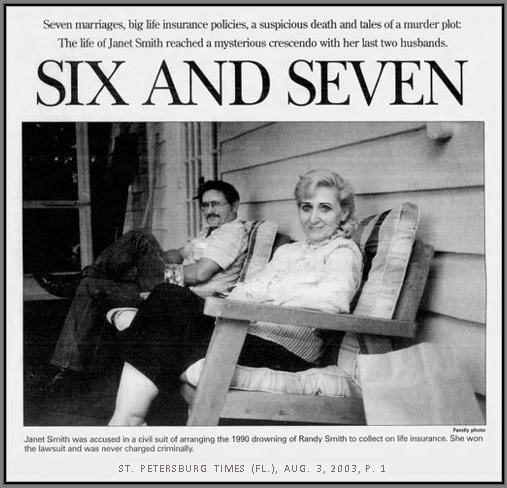