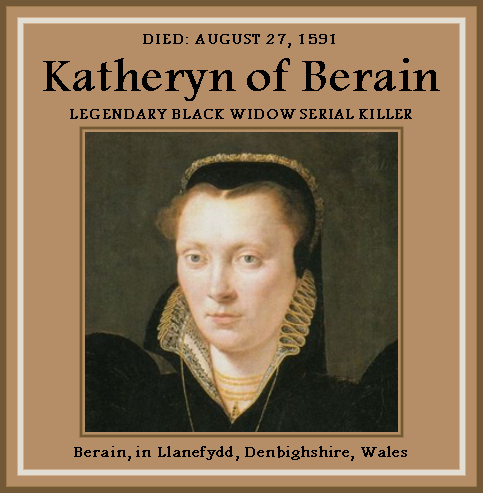 EXCERPT: Katheryn of Berain: A young, beautiful gentlewoman from North Wales, connected by blood and marriage to some of Wales’ most influential families – and perhaps the Tudors – marries four times, and outlives three of her husbands. Did this wealthy heiress poison her husbands with her own hand, and kill a succession of lovers? Did she callously agree to marry her second husband on the way to the funeral of her first? Was Katheryn of Berain a 16th century villainess? Or, perhaps, has she simply been the victim of spiteful gossip, folk stories, and centuries of exaggeration?

At the age of 22, Katheryn married John Salusbury, Esquire, son of Sir John Salusbury of Llewenni (died 1578), of the prestigious Salusbury Family of Lleweni, Denbighshire. According to John Ballinger, this was probably a "child marriage". There is said to be a letter written by young Salusbury while at Westminster School in which he mentions his wife. He died in late May or early June 1566. They had been married for nine years and had two sons:

Following her first husband's death, Katheryn married Sir Richard Clough, an extremely wealthy merchant, who established the Royal Exchange in the City of London with his business partner Sir Thomas Gresham. Clough had lived in Antwerp, and upon his return to Denbighshire in 1567 he built two houses, Bach-y-graig and Plas Clough. The houses were built in Antwerp style by Flemish craftsmen and were the first brick houses in Wales. Upon Clough's death Plas Clough was inherited by Richard Clough, his son by his first wife.  Katheryn had two daughters by Clough.

The Cloughs lived for a time in Antwerp, where Katheryn's portrait was painted, probably by Adriaen van Cronenburgh, as the National Museum now suggests, or perhaps by Lucas de Heere, a previous attribution. Within six years of their marriage, Sir Richard Clough died in Hamburg aged forty. He was probably poisoned because of his work as a spy for Queen Elizabeth I.

Katheryn then married Maurice Wynn of Gwydir. Wynn was Sheriff of Caernarvonshire and left Katheryn an extremely wealthy woman when he died. Katheryn had a further two children by Maurice Wynn.

Katheryn's fourth and last husband was Edward Thirlwall of Plas-y-Ward, who outlived her.
The Welsh poet Robert Parry wrote an elegy on the occasion of Katheryn's death. Her many descendants included Hester Thrale and the 18th century explorer John Salusbury.