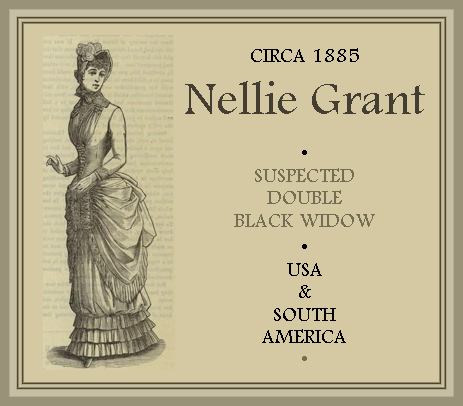 EXCERPT (Full article below): A little later, still only 19 years old, she married a wealthy American, many years her senior. He was found dead in bed one morning three weeks after his will was made in her favor. In 1884 or 1885 she married a man from South America. His death also was very sudden. From this husband she received about $30,000. She was always very extravagant in her mode of living, and never lost a chance, even during her periods of married life, of getting men into compromising positions, and, then, through some attorney, making them pay.

FULL TEXT: The exploits of one of the most noted of America’s adventuresses, who is said to have run away from there at 10 years old, was told recently to the New York Recorder by a lawyer. She then told him that her son, fresh from graduation at Harvard college, had visited Europe and had there met a woman whom he had fallen desperately in love with. They had become engaged without the mother’s knowledge and would have undoubtedly been married had not her son one day met a man who knew the woman and informed him of her character, producing some proof. Then the son, almost heartbroken, broke off the match and returned to this country. He never supposed she would follow him, but she did, and through her attorneys began a suit for $50,000 for breach of promise. The son had become prostrated, and the mother was so afraid of the publicity of the affair that she was almost willing to pay the $50,000 “to be rid of the creature,” as she expressed it.

Beyond a photograph and memoranda the lawyer had no information. He says: “You can imagine how surprised I was when I saw the photograph and the beautiful face thereon represented. The eyes seemed to attract and fascinate me. I could not blame the young man for falling in love if he could if he supposed the original was good and pure, as he undoubtedly did. The girl undoubtedly did. As a lawyer I could understand that this suit was only a blackmail scheme. The girl undoubtedly held compromising letters, and these were her stock in trade. It was plainly my duty to save my client and her family from scandal, but to do this I must, of course, obtain definite information that I could use against the girl, for, bad as she might be in character and disposition, her appearance was certainly in her favor, and she would win before any jury.”

After a long search for information the lawyer was referred to Detective Newcome of New York, who was a post-office inspector for several years. Mr. Newcome had her record on file in his office with hundreds of others. He at once produced it and said: “There’s just what you want. The girl never was convicted, for I could not at that time get any one to complain against her, but there is her pedigree from the time she was eight years old up to three years ago. She is now 35, but she would pass for ten years younger. She has been married four times; divorced once; two husbands died under peculiar circumstances, which would admit of investigation, and the fourth, after being married to her that he gave her $10,000 and paid her fare to Europe. You give me the case and I will make her give up every scrap of paper she has that your client is interested in. if she refuses to do this I will telegraph a man that I have no doubt will be glad to help us out. She made a mistake once and forged some money orders.”

“I left the matter in Mr. Newcome’s care,” the lawyer continues, “and within a few days he invited me to his office, where, much to my astonishment he presented me to the woman.”

“’Nellie,’ said Detective Newcome, ‘this is the gentleman I mentioned. He is the lawyer for the young man you wanted to swindle. Give him all the letters, jewelry and trinkets you have. If you do this, I shall feel satisfied. If you don’t – well, Nellie, I won’t say – but you know me,’

“She evidently did know, for she gave me everything the young man had given her and then signed a letter to her attorney withdrawing the suit.”

The Recorder gave the history of the adventuress, but it was not entirely correct. The Phoenix, through correspondence with Detective Newcome and others,  finds that the woman’s maiden name was Nellie Wasson or Watson, that she lived in Wilmington, and ran away at ten years old, as already stated. Her father was a French Canadian, a common laborer, and her mother an English woman, “not very bright, and not at all particular as to her morals.”

In casting about for the girl’s probable identity the New Yorrk story recalls to a Wilmington resident of 30 years ago Rev. Benoni Tyler’s adoption of a girl who developed strange circumstances. Mr. Tyler was an itenerate minister and ran a small store in Wilmington. He was one of the characters of the town, and is well remembered there by all of the older residents. He died several years ago. He found the girl at Lowell, Mass., on one of his trips there to buy goods. He brought her to Wilmington and as a member of his family she was known as Nellie Grant. She was exceptionally bright, but at a tender age developed a disposition for general wilderness. When about ten years old she ran away, coming to Brattleboro, but staying only a short toime. Where she went from here is not known. While these facts, including similarity of age, raise conjecture as to the identity of the “Wilmington girl,” nothing definite can be said without further information.

The adventuress is said to have gone to New York as a nurse girl. She was large of her age and very attractive in appearance. She was finally adopted by a Mr. Stevens in Boston. Stevens took her with him and his family to Europe, where she was educated and grew to be a very handsome woman. She speaks German, French, Italian and Spanish like a native.

While in Germany Stevens died and the girl married in Berlin a young German of good family named Oppenheimer, who was an army officer. From him she was legally divorced after a few months, because of her intrigue with a French count. A little later, still only 19 years old, she married a wealthy American, many years her senior. He was found dead in bed one morning three weeks after his will was made in her favor. In 1884 or 1885 she married a man from South America. His death also was very sudden. From this husband she received about $30,000. She was always very extravagant in her mode of living, and never lost a chance, even during her periods of married life, of getting men into compromising positions, and, then, through some attorney, making them pay.

What the young woman is now doing in New York is not known, but from her looks and the manner in which she dresses it is evident that she is in good favor with somebody. The lawyer referred to above and a Recorder reporter saw her riding with an elderly man who was conversing with her and looking into her face in a way that made it manifest that she had found a new victim.

She is about five feet seven inches in height, of perfect form, not too fully developed. Her hair at present is of a reddish auburn. Naturally, it is black. Her features are German, her eyes are Irish dark blue. Her voice is well modulated and musical. Her accent resembles somewhat that known as the English, which is naturally that known as the English, which is natural to her. She is a charming conversationalist, and knows how to make herself irresistible.

Aside from her extraordinarily beauty of face and figure, she has no personal peculiarity unless her walk might be so called. It is stride, almost masculine in its freedom and boldness. She is a remarkably expert horsewoman.

The publication in the Recorder has caused much comment in New York, as there are many prominent people in that city who have met the woman there and abroad. Few except those whom she had victimized knew of her career. The minute details of her record are not now available, as the papers in Detective Newcome’s office were forwarded without copying to Scotland Yard (England’s most noted detective agency) in 1893. The New York detectives were surprised to find that the adventuress was in New York. She was undoubtedly in trouble in England, otherwise Scotland Yard would not be looking her up so closely.